The Amazon Echo is a great device for many purposes, especially controlling home automation gear.  Adding Amazon Echo Dots makes life better.  Music, news, other capabilities are cool but controlling lighting, heat, security in your smart home thanks to the Alexa personal assistant, is where the Echo really shines.

With the addition of the smaller Amazon Echo Dots, though, your Alexa voice controlled home automation can work throughout your home, by scattering them where needed so you can talk to Alexa, and control your house from any of those rooms!

After all, if the Amazon Echo itself has one real weakness, its that it sits in only one room, so you can only control your devices when it talking range of your Echo.

Amazon’s Dot – aka Amazon Echo Dot, is an affordable solution to get you to that whole home voice control solution.  The Dot is shaped like a hockey puck as opposed to  the tall cylinder that is the Echo, it is far more compact yet offers all the personal assistant functions (and more) of the Echo.  What it doesn’t have, primarily is a robust speaker near as good for music.  More on that but first. 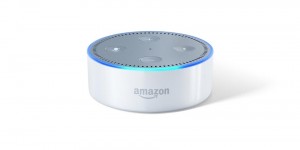 The Amazon Echo Dot 2 is affordable!  Amazon recently announced a new second generation.  Now Dot is available in white as well as black, which is great, but even better, the new price for a Dot is only $49.99! For those of us with a respectable number of rooms, Amazon is even offering a six pack deal – buy five, get one free!   Six Dots for a total of under $250, for whole home coverage looks pretty reasonable, especially when the Echo itself, is still $179, and the Dot is almost its equal (except on sound quality).

The thing about the Amazon Echo Dot, or Amazon Dot, or just Dot, whatever you want to call it, is that they are ideal for buying several and placing them in other rooms in your smart home that don’t have the Echo.  I should note, that Amazon just started selling the newer, and less expensive 2nd generation Dot.  First shipment date (as I write this), is next week – Oct 20th.

Dave who wrote our recent, in-depth review of the Amazon Echo has only had the Amazon Echo itself, but I have had an Echo for over a year, and got my first Dot many months ago.  While my Echo resides in my home theater (upstairs), which doubles as my office, I have relied on a Dot downstairs where my living room and kitchen meet, for turning on and off lights, etc.  After all, it’s crazy to leave the kitchen and run upstairs to my theater to tell it to turn off the kitchen lights!  Right?

The Amazon Dot, like the Amazon Echo itself, has 7 microphones in an array for far field sensing.  That is, it’s pretty good at understanding what you say, even if there’s some music playing.  In fairness there are limits, and it should be noted that Alexa sometimes wakes up and responds when the TV or music “says” something that Echo confuses with “Alexa – the command you use to get the Echo and Dot to listen.

Of course if you are 20 feet away, you tend to end up shouting at Alexa, which is not polite.  I need another Dot for further away in my living room.  But my wife needs one in the master bedroom which has a nice seating area, fireplace, wall mounted LCDTV, and motorized shades on the windows.  It’s pretty nice so that room is also my wife’s get-away area, for watching HDTV and getting work done.  There’s a den we don’t use much but one would be nice in there too.

I got my wife an Amazon remote for our Amazon Echo early on, but it’s not as convenient as talking to a Dot or an Echo.

All considered, I don’t need Dots in all the rooms in my house, but I’d be very happy with one Echo and 4 Dots, even 5.  A battery powered Tap might be useful outside too, but that’s another story.

Currently the Amazon system – Amazon Echos, Dots and Taps, is the most versatile voice controlled smart home system, or at least the most capable without a top 1%er budget.  There are some voice solutions for some high end control systems, but most folks looking at home automation today are looking at affordable controllers (hubs) usually under $100, then $30-$70 per smart device, so you can accomplish a whole lot of whole home automation for a couple thousand dollars.

True, there’s Apple’s Siri (HomeKit) but the number of devices currently controllable is small, due to Apple requiring compliance to a number of standards they have for enhanced cyber security.  I like what Apple’s doing in that regard, but Alexa today works with probably a couple hundred devices, vs a few dozen that work with Siri.  Both will grow their ecosystems significantly over the next couple of years.  Right now, in conjunction with my SmartThings Z-Wave hub, Alexa can voice control 80+ percent of the devices I have installed, including basically everything that works with my Z-Wave hub.  Siri works with maybe 25% of my devices, so far.

Let’s stick to the now, for now.  And to the Amazon Echo and it’s family.

I just ordered my first white 2nd generation Dot.  It will replace the dark one on the white kitchen counter, and that one will be moved our master bedroom.  I plan to add at least one more, but will wait a while.

Dot and Echo – they are more than a Smart Home controller:  Although the home automation aspects of the Echo system is my primary interest, and for that matter, in over a year, I probably haven’t used my Echo (or more recently my Dot) for more than 10 hours of music playing.  Why?  Easy, I’m really into music and have a killer sound system in my home theater which makes the Echo sound like what it ultimately is – a “transistor radio” not a serious sound system.  But, I realize in this day and age, I’m the dinosaur, with most younger people believing that high fidelity is something that actually exists between your ears when listening to heavily compressed music from one’s smart phone played on some sonically inferior ear buds (that includes Apple’s).  I also have two other “serious” sound systems, and a nice Sonos stereo rig as well, so the Echo simply can’t compete – on any level.

But it is a key feature folks like – that music playing, especially since you can conveniently just say things like “Alexa, play some Jefferson Starship,” or “classic rock” or “Bob Dylan” (in honor of Bob Dylan who everyone learned today just received the Nobel Prize for Literature).  Yes, his lyrics are poetry, and poetry is literature!  So I’m setting up things so I can stream to most of my audio systems.

I digress (again). Sorry ’bout that! 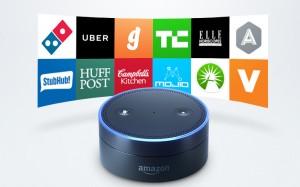 The point is, the Amazon Echo (and it’s family) itself is more than home automation, it is a very social system that partners with lots of different “things” from ordering pizza to buying concert tickets from Stubhub, or ordering up an Uber.

The new Dot has a power connector, and that 3.5 mm stereo jack already mentioned, located on the side.  It even comes with a short 3.5mm stereo cable. 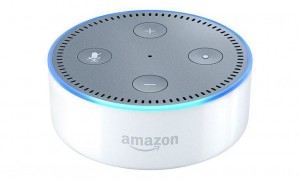 The 2nd generation Dot has four buttons on top, and seven microphones for far field “listening.”

The new Dot has a microphone mute button, volume up and down buttons (you can adjust the volume too by saying “Alexa, lower the volume…”, and then there’s the Action button (on the right) which is the equivalent of waking the Dot by saying “Alexa.”

Since I already mentioned the stereo jack, check this out, there are already a couple of “better” speaker systems, designed out there to work with, in fact literally look like a base for the Dot, same diameter. 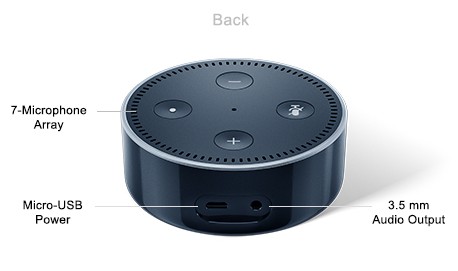 One important thing about the new Dots that I failed to mention so far, is that the Dot will also stream to bluetooth speakers – whether they are equipped stereo receivers (with Bluetooth) or a basic boom box, or anything in between.  I’ve just added a bluetooth receiver to my older living room AV receiver.  Now I can ask Alexa to play that same “classic rock” but instead of using the Dot’s speaker, it’s playing though the receiver and two pretty  awesome speakers.  I haven’t installed outside speakers on my patio yet, but now I can take out an old Bluetooth boombox and use Alexa, instead of as usual, using my iPhone and Siri.  I love choices, especially with there is more than one, and they are all good ones.

The new Dots share the same pretty lighting ring as the older ones and the Echo.  In our house we love those blue green lights.  (You get red when Alexa can’t communicate with your home Wifi.)

Bottom line:  Amazon is doing a great job of having the Amazon Echo family work with lots of devices, including Philips Hue, LIFX smart bulbs, as well as other smart bulbs, dimmers and switches, including Lutron – see our recent Lutron review – they have some great products to consider.  Then there’s those Kwikset, Schlage and other locks, WeMo products by Belkin, Lightify indoor and outdoor lighting, the list, as noted is hundreds strong, but these are just a few products that we have reviewed and work with Alexa and her Dots and Echos.

What’s “smart” around my house that doesn’t work with the Amazon Echo and it’s family?  Mostly things like Bluetooth smart lights and locks, and sometimes it may be able to control an individual device but not see a grouping set up, such as six lights to work together.

I think the Dots especially the new ones, at a lower price, is exactly what Amazon needed to turn a one room personal assistant into a whole home – smart home solution.   And just in time too, as the Amazon Echo has to now take on the brand new Google Home which is shipping early November (2016).  Who will come out on top?  We have a Google Home coming in, so expect a separate review and then a head to head comparison review between the Amazon Echo and the Google Home.

My recommendation re the Amazon Echo and Echo Dot 2:  Go for it!  I know a lot of folks with at least an Echo, and only one has indicated that if they had to do it again, they probably wouldn’t.  The rest tend to come in various shades of enthusiastic!