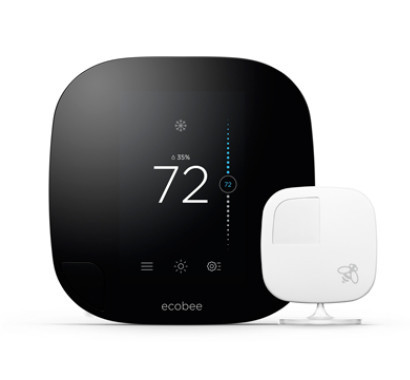 The Ecobee3 is one very smart thermostat, and, it’s also worldly and friendly!  The Ecobee3 relies on Wifi for communications, so that you can control it from the provided App that you can download from the Apple or Google App stores.  You adjust the Ecobee3 with voice control from Apple Siri, and Amazon Echo, and you can control it from a web browser too.  I’ll get into all of that within this review, but for right now I’ll start by saying that the App (we test the Apple version), the thermostat itself, works very nicely.

I should mention that Ecobee is a Canadian company – located in Toronto.  That’s noteworthy because it gets cold up there, (a lot colder than here in S. California) so I trust they take their heating, and eco savings rather seriously.

The standard Ecobee packaging includes the Ecobee3 thermostat, some installation hardware, and a Lil’bee remote sensor.  The list price seems to be $249, and that also seems to be the most popular price online at this time, although there does seem to be some minor discounting.  You can also find the Ecobee3 in the Apple Stores, Best Buy, Walmart, Home Depot, and many other places.  It has surprisingly wide distribution for a product and brand that is fairly new.  Your favorite home theater or home automation installer or dealer also likely has access.

This Ecobee3 review  started out to be two pages, but grew to four. Lots to cover, but you should find this an easy read.

If the Ecobee3 was a politician, it would garner support from all sides of the political spectrum.  In Connected Home parlance, its strength is that the Ecobee3 is widely supported and actively supports multiple major eco-systems: 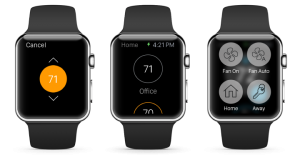 The point I want to make is that the Ecobee3 is a “great communicator.”  Not only can you use the App, but you can control the Ecobee3 from your iPhones and tablets, using Siri and voice commands.  It also supports the SmartThings Hub (Samsung) perhaps the best known Z-Wave controller, which also supports Wifi

There’s more.  You can also control the Ecobee3 by talking to Alexa, which is the Amazon Echo’s voice powered personal assistant.  (Also being reviewed!)  Now you know what I mean when I say that this smart thermostat is both worldly and friendly.  Perhaps it’s a blend of Ronald Reagan and Bill Clinton?  It seems to get along with some of the most major players.  That’s a great start, because as the industry evolves I really believe that the manufacturers of products that put in the most effort to make sure they are compatible with major ecosystems, are most likely to be the long term survivors – the ones that will thrive.

Too often do I talk to some company making smart dimmers or smart bulbs, with me complaining that not all the features are available on this controller, or that hub, etc.  Some foolishly reply that it’s up to those other companies to support them.  I disagree, smarter companies work with the major players to make sure their individual devices are as fully supported as possible. 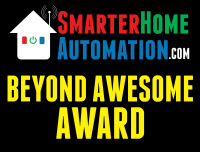 But let’s return focus to the Ecobee3, starting with positioning it in the marketplace.  Best I can tell, there are three primary players in smart thermostat “space,” the other two being Google’s Nest, and Honeywell, Honeywell has long been of the biggest thermostat manufacturers, and now offers a full line-up of smart thermostats including the Voice and Wifi controlled Honeywell which was our first smart thermostat review.  Since Honeywell is the “old school” player, and Ecobee with it’s Ecobee3 the fast rising star, that leaves Nest as being the most recognized name, specifically in “smart” thermostats.  Don’t get me wrong, there are, and will be plenty of other manufacturers.  If smart thermostats are anything like smart light bulbs, there are probably a whole bunch of startups doing crowdfunding at this moment.

Like the Nest, the Ecobee3 has the ability to work with the rest of your smart home.  For example, set up with the right other gear, the Ecobee3 can be set to know to turn off the heat if no one is home.  The Ecobee3 even comes with a remote sensor as part of the package – the Lil’bee – which we’ll discuss later. 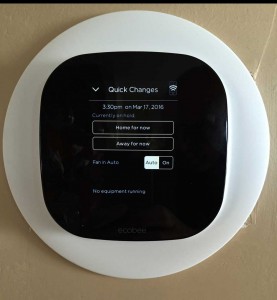 Ecobee3 mounted in our Dream Home Project, with the larger white trim. We will remove the trim ring when we repaint (it’s hiding the larger footprint of the previous thermostat).

This review will consider the overall feature set – the proverbial “features and benefits.”  Then we will get into the installing of the Ecobee3 and it’s setup and operation screens.  We will also explore using the app, including multiple screen shots.

I stress that the Ecobee3 can be voice controlled by Siri, Alexa, or run from apps from supporting controllers.  As is typical, when using personal assistants, mostly what is supported are the more basic controls, they normally do not allow you to do things like the setup, using voice control.

For example I can tell Siri to lower the temperature to 70 degrees, but I can’t setup a schedule of times and temperatures for the week that way. For that, it’s App time, whether Ecobee’s or perhaps a well designed app support from a device like the SmartThings Hub.  Since the Ecobee3 is first and foremost, a Wifi device, and therefore naturally has its own App, don’t expect full “setup” support from most hub/controllers.  (A Z-Wave thermostat, by comparison, wouldn’t have it’s own app, and therefore would require the controller/hub to be able to handle all the configuration (or not use all the features.)

Time to get into the details.  The next pages will cover some basics re installing the Ecobee3, Setup, using the App, or the smart thermostat itself, the main menus, working with other smart devices, voice control, remote operation and finally:

The overall Ecobee3 experience, and the summary that includes also includes a wish list for some additional capabilities that future firmware can address.