Let’s start this page of the Ecobee3 review with the installation. In this page and the next we will explore the Ecobee3 smart thermostat’s setup, controlling the Ecobee3 from its App, or from the unit itself, or with Apple HomeKit – Siri, Amazon Echo -Alexa, or the SmartThing Hub, or with a web browser!  The last page will start (briefly) about remote sensors, but mostly cover the overall experience including integrating into the smart home, and finally the summary.

Let’s get one thing straight.  There was a time in my distant past where I might have been considered myself a DIY type (I built tube powered CB’s and Ham radio gear from kits, soldering iron in hand) .  I can probably best describe myself as an “early adopter” of technology.

I mention that because I do not install the hardware I review in most cases.  I have a handyman who shows up every month or so to replace one smart door lock with the next one I’m reviewing, changes out smart thermostats, outlets, etc.  Oh, I’m the guy that still has to configure most everything, but then, if I didn’t, I wouldn’t be much of a reviewer. 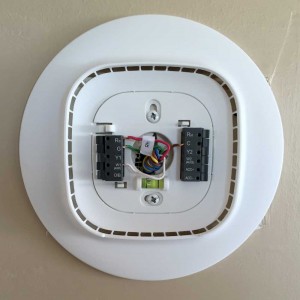 Inside back of the Ecobee3 shows the connection panels, a level so you mount it straight, sliding screw slots…

Replacing my very old, very stupid thermostat was pretty straight forward.  That was because I was lucky.  You see, there’s generally one wire (oft called the C wire) that is needed to provide power to any smart thermostat.  Now just about every HVAC system can provide that power on one of the wires in the multi-wire all-in-one cable that runs from a heater (or AC) to the thermostat.  If that wire isn’t live, there’s no power for the thermostat, and these smart ones aren’t going to function long enough on a couple of AA batteries, so don’t even think that.

I said lucky, because the wire was live.  For the Honeywell smart thermostat I previously reviewed, which controls the upstairs heating system (our “dream home” project has two separate systems), no such luck so I called in an HVAC guy to wire that one up.

I mention that, because if your power wire isn’t live then you too will have to make it so.  The Ecobee3 will let you provide power “locally” but then you have some wires maybe running to a local outlet.  It should work but:  Messy!  Do it right, if possible, pull the power from your heating/cooling system.

The inside front of the Ecobee3 has the pins that snap into the back piece. The serial number is in the lower right

The documentation is really good.  My handyman took all of 10 minutes to remove the old, make sure I had the power, and install the new one.

Only one problem with that:  The old thermostat was larger, and there wasn’t full paint under it.  The good news – by using one of the two white trim covers – the larger one, I could hide the missing paint, screw holes etc. that would have shown if I didn’t use either trim “ring.”  That area of the house will be painted soon, so when that happens, we’ll “fix” that, and I’ll then just have the Ecobee3 there in black, without a white trim ring. It looks pretty cool now, but I think it will be more esthetically pleasing without the trim – but in your smart home, that will be your call.

Basic Configuration of the Ecobee3

At this point, the Ecobee3 is mounted and has power.  It’s ready to meet the rest of your smart home.  After a Hi on the screen (and at some point a bee flying around it), things get going.

Ecobee makes it easy to get the thermostat talking to your home’s Wifi.  Since we’re an Apple ecosystem home, I let my iPhone do “the heavy lifting”.  Using the iPhone, it will spot the Ecobee3 as a wifi device, then like with other wifi devices, the iPhone will handle a lot of the details, and when it’s done talking to the Ecobee3, it will then change back to talking to your home Wifi network.  The iPhone’s camera will even read the bar code to pull info.  You can do all that manually, put in the serial number manually etc., but why.  There’s plenty of specific setup to do without having to be a “wifi guy” when a smartphone can do that part of the setup for you.

Now we get to the challenge:  Wifi.  May the gods of Wifi finally grant us an upgrade that supports true mesh networking.  In our dream home project, the main Wifi router is up in the home theater – far, far away (but in the same galaxy) from the Ecobee3, or for that matter, far away from much of the house.  As a result, I have two wifi extenders – of the power line variety.  They work great for internet access, but they seem to hate configuring wifi devices.  (That’s why I hope a mesh design will happen, where that shouldn’t be a problem.)  It took several attempts before I was able to get the house’s Wifi and the Ecobee to play nice with each other.  Basically they couldn’t find each other.

But this has happened, I think, every time I’ve tried to tie in a smart wifi device downstairs – closer to the extender than the main Wifi router.  So, I specifically blame Wifi, not the Ecobee3.

Fortunately I expected this to happen.  Being an optimist, I tried anyway – with no luck.  Then, I walked a few feet away to the power line Wifi extender near by.  I removed it from the wall, and I tried again!

Voila’ they hand shaked – that is, they (the Ecobee3, and the main Wifi router upstairs) said hi to each other, and agreed to work together.  Afterwords I plugged my extender back in and everything still worked.  Again, I’ve had to remove my extender to configure other wifi devices!  These days I assume I will have to.  You should to.

The good news here if you have a largish house, is that if you are using some sort of extenders, its because your Wifi is very weak in parts of your house. But Wifi does have good range, so should cover the whole house even if the weak signal is too slow for internet surfing. – your router should have the range to find the device you are introducing to it even if on the other side of the house.

OK!  The Ecobee is now talking to the Wifi, and from there, the rest of the world.  True, you can fully control the Ecobee3 thermostat completely from the unit itself, but now you can control it in your house, or across the planet, from your smart phone or other device capable of running the app or a browser.

Best I can tell, anything you can setup from the front of the Ecobee, can be set from the iPhone app (and I assume the Android app) as well, or from the Ecobee website.

This image player looks at the key menus from the iOS app.  Comments have been added for some of the menus.

If I have one really important tip you should remember, it relates to setting schedules, which works well enough but wasn’t very intuitive.  The Ecobee3 expects you to create one day’s schedule, then essentially copy/clone that for each day you want to use that schedule, be it just two days a week or everyday.  But here’s the thing.

Because you are copying a day’s schedule, when you start creating that day, you have to start “the night before.”  That is, the first one you want to create is the one that starts sometime before midnight, the night before, and carries into the day.  Thus in the forth image (schedule) you’ll see that the first one is the Comfort zone Sleep, it remains in play until I set Home to kick in at 7am.

From there, create your various Comforts (with different temperatures) set their times until you have completed the day.  After that, it’s a snap to set that schedule for the whole week, or maybe just Monday, Wednesday, and Saturday.

I have to say it now, that really did stump me, and resulted in a call to Ecobee.

The Ecobee support person was awesome.  Nice that their hours reasonable too. He was able to answer a number of questions I had, but how to set up the schedule was the reason for the call, and he explained it to me clearly, and even stayed on the phone while I set up a few Comforts and times, and then had them repeat for the week.

I’ve talked to Ecobee twice now, and have been really impressed.  Support with home automation companies is a real crapshoot, some are great, some are worthless, some are unreachable. (You know:  Email us we’ll get back to you in a few days – maybe!)

From my experiences, Ecobee gets an A.  In this world transitioning from DIY to mainstream that’s going to happen over the next 2-3 years, great support is important, and may well be the difference between survivors and “also rans.”

Controlling the Ecobee from it's front panel

Below are the similar menus to the App, but this time from the front of the Ecobee3 itself.  Again, I’ve added some comments to some of the images, typically not duplicating what I said on an app’s image.

At this point the Ecobee is installed, setup, and programmed.  On the next page we’ll get into the experience, including support for voice control, capabilities…