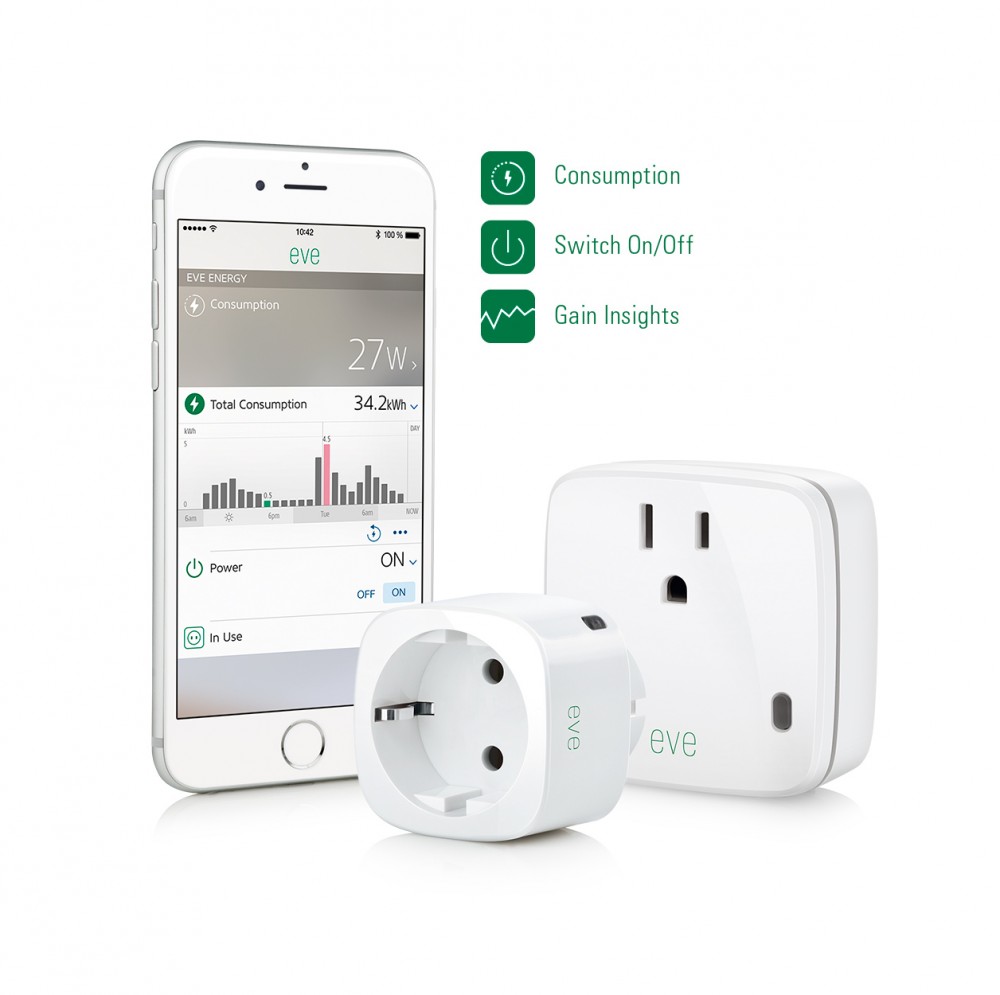 We’ve reviewed smart outlets for the smart home before, but the Eve Energy is unique due to Apple HomeKit compatibility, which allows voice control using Siri, and massive in-app features. With its suggested US list price of $49.95, the Eve Energy from Elgato is the type of well thought-out product that is moving home automation out of the Wild West and into more civilized and user-friendly territory.

In this review, we’ll be taking a look at the main features such as monitoring energy consumption, Bluetooth control via the free app, HomeKit connectivity and some cool automation features within the Eve app.

Perhaps the most unique thing about Eve Energy is that it only works with Apple HomeKit. Apple fans, rejoice!

The Eve Energy, although previously released in Europe, is now available all over the U.S. in major retailers like Amazon, Walmart, and in most tech retailers like B&H Photo/Video and NewEgg. Needless to say, you can shop around and you won’t have to work too hard in the process.

The Eve Energy works similarly to the WeMo Insight, which we have previously reviewed. Simply plug it into an outlet, and plug in whatever two or three prong device you wish to control and/or monitor the energy consumption of. Then, connect to the Eve Energy via the Elgato Eve app (which supports multiple Eve Energies or other Elgato Eve products like the Eve Room or Eve Door and Window, which we have yet to review).

Unlike the Belkin WeMo Insight, the Eve Energy is Apple HomeKit compatible which means us Siri users can control the Eve App – and thus all other Eve products – with just our voice, which is exactly what I have been doing. Not to mention the extra security features that come with HomeKit compatibility.

The free app has some really great features that I had a blast exploring. A brief rundown of the features include energy consumption, great statistical readouts of the energy consumption data (and other data gathered by other Eve devices), automatic scenes and control over multiple devices simultaneously through device grouping.

You can turn the switch on and off inside the app, through Siri as well as manual control where you press the physical button on the switch. Through the app and Siri you can also access the “Scenes” feature which basically allows the user to group together devices and “Rooms” (which I will discuss later) but basically you can, for example, say to Siri, “I’m home,” and whatever devices are grouped under that scene will activate (or deactivate depending on the parameters you set).

However, since this device is exclusive to HomeKit, you’ll need an iPhone, iPad or iPod Touch with iOS8.1 or later (Elgato recommends running the Eve app through iOS9.1 or later). The app connects to and controls your Eve devices through Bluetooth. This limits the range of connectivity but with HomeKit you can access your Eve products remotely (aka when you’re away from home) using an Apple TV, but more on that later.

The Eve Energy accepts any standard device’s two or three prong US AC power cord but requires a three prong outlet to plug in to. It will measure the consumption of, and control, any three prong (grounded) device and two prong devices as well. The instructions that come with the Eve Energy state there is an 1800 watt maximum one can have running through the device and be sure to note that this Eve product is for indoor use only.

Although monitoring your energy consumption is pretty cool (and happens to be very “in” these days), allowing us to make changes to our electric habits, as we said with the WeMo Insight, for most people this feature is a fringe benefit. The main idea behind this device is that you can control some otherwise “dumb” devices such as lamps, coffee makers, fans or any other kind of appliance you’d want to turn on and off remotely (via Siri or inside the app) or by a set of predetermined times or set circumstances.

The Eve Energy is accurate within a few watts when measuring high wattage appliances such as refrigerators and toaster ovens. However, when measuring low watt appliances such as LED bulbs, the Eve Energy’s measurements are pessimistic (where the WeMo’s low-watt measurements are optimistic). This was shown when we tested the WeMo Insight against the Eve Energy on our very own Pulse Solo (which you can read about here). While the Pulse Solo is rated at 9.5 watts without music playing, the WeMo measures the power draw at 9 watts whereas the Eve Energy measures it at 12. When music is on, the Pulse Solo is rated at 12.5 watts and WeMo measures just under that at 12. The Eve comes in at 15 watts.

When looking for accurate measurements, WeMo Insight in the low-watt ranges is the better solution because it measures anything above 2 watts. With Eve, it wont measure anything under 5 watts, it merely registers zero watts. The good news is, it doesn’t really matter. With a 4 watt device we’re looking at 2 or 3 dollars per year. When we get into the high wattage areas where it really matters, the difference isn’t outstanding. With a U.S. list price difference of 5 cents, what it comes down to when deciding between WeMo Insight is comparable traits i.e. compatibility, app features etc. For example, as I will discuss later, the Eve App allows for greater depth of use when it comes to timers, automations and rules. But the Eve app falters where the WeMo Insight picks up in knowing sunrise and sunset times.

The government regulated calculations for energy expense are based on $.12 per kW/hr , but the national average is now, as of 2016, above $.12. California, New Jersey and several other states are above $.155.

Incremental costs run about $.35 per kW/hr (in California) and it’s what we use in the WeMo Insight, so I plugged that into the Eve Energy for consistency. I figure I’d be looking at some “non-essential” devices, monitoring their consumption in order to save on energy costs so any device we plug in to this Eve should be calculated at the highest tier.

Thanks to using a high realistic cost, we here at Smarter Home Automation were able to report to our readers that the Lightify, at $.35 per kW/h, looks to cost less than $4.00 a year under typical use of about 6 hours a day, 365 days a year. (by the way, the government ratings are for three hours per day, 365 days per year – aka the lowest possible estimate) If we bought into the official $.12 cost, that Lightify light setup would likely cost no more than $1-$2 a year.