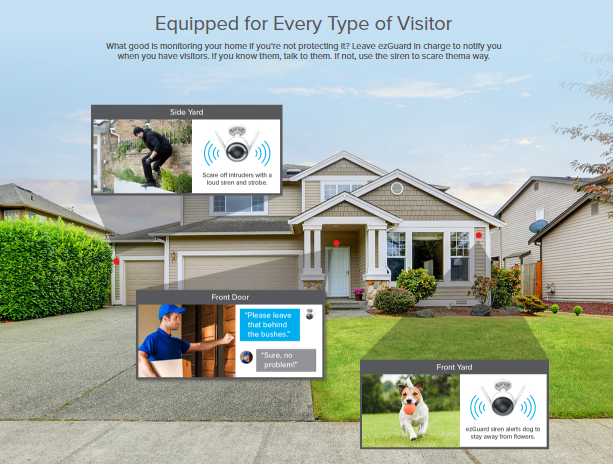 Installing the EzGuard 1080 is not complicated. For the most part, this is an easy DIY project. Especially with the wireless connectivity. The team at EZVIZ made it simple by providing a drill template. Now you don’t even have to measure. It is a sticker, so you can place it where you would like to mount the camera, and drill right through the sticker. Even leave it in place as you mount the camera.

As I mentioned, I was installing the EzGuard camera on my front porch. When planning the installation of this camera, there are a couple things to keep in mind. Power and connectivity.  Will you be able to get a good wireless signal to your router? Is there an outlet within 10 feet (6 feet with the cable I was provided) to be able to power the EzGuard 1080. In evaluating the power adapter, it does not appear to be weather resistant.  Can you run a network cable for a wired connection?  If you are unsure about the wireless connectivity.

There are many apps you can download to see a visual reference to the strength of your home wireless network. Never a bad idea to make sure before you start to install.

For the location I chose, I was already using a wireless camera so the EzGuard 1080 should not have a problem.  There is also an outlet that is not to far away. I will be using an extension cord. I combed the EZVIZ website and was looking for extensions, but I came up empty. There are lots of extensions available for other cameras and devices that should work. You will want to make sure you get the correct size.

As I have a location chosen, it was time to set it up and install it. The instructions are pretty clear, but in looking at them, you should setup up your user account and configure the camera before mounting it.  If you are placing it high and need a ladder, you don’t really want to have to climb up and down should anything go wrong. One of the first steps is to scan a QR code on the camera.

To get the EzGuard 1080 up and running, first thing is to power it up. So I found the closet outlet and plugged it in, while it was sitting on the dinning room table.   As soon as you plug it in, three red lights light up.. then two drop of and the top light turns blue when finished.

Once you have power, its time to download the app! You can get the EZVIZ app from your App Store. iTunes or Play.

Setting up the EzGuarD 1080 is as simple as following the app.  Once downloaded I created an account and verified my email address and was ready to go. The next step was to scan the QR code on the product.  Once scanned, it imported the serial number information into the app.

I hit a little hiccup when I was going to add the EzGuard 1080 to the network. The message that was popping up on my screen was that I wasn’t connected to a wireless network. Although, I was.  After looking in the manual it became apparent. The EzGuard 1080 will only work on the 2.4Ghz frequency. My phone was connected to a 5Ghz network. Once I switched networks, I was able to add it without a hitch. 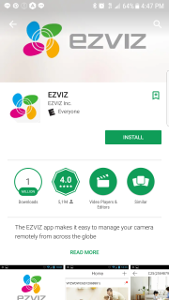 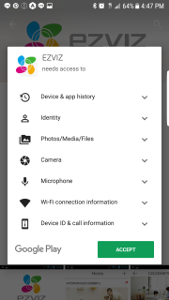 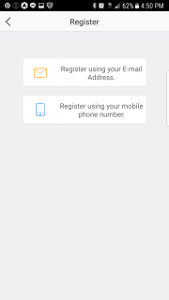 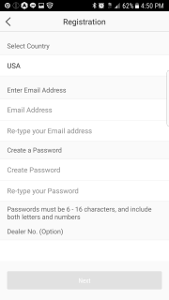 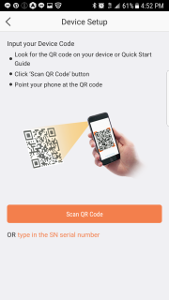 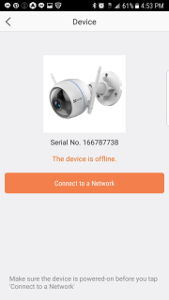 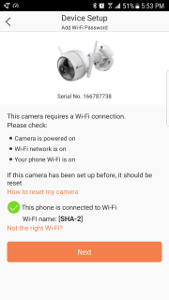 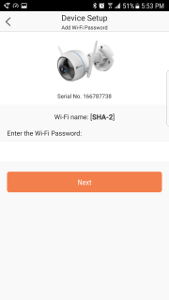 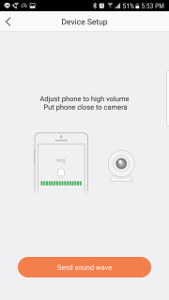 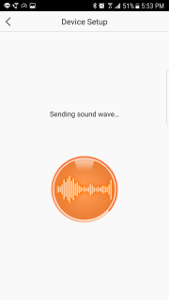 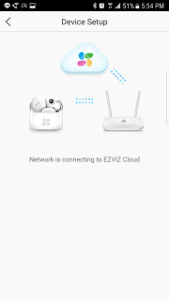 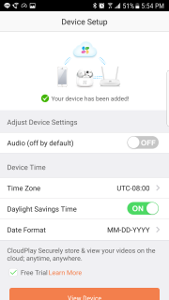 Once I had the app configured it was time to install the camera.  The drilling template makes it easy to mark the holes, drill thought the template and install right on top of it.

Once installed the mount of the EzGuard 1080 gives it a lot of flexibility on capturing the right view.

As I went to power the camera, I again noticed the short power cord.  As you can see in the picture. If I let the power adapter hang from the camera, it didn’t even touch the ground. Perhaps there was a rolling change and the box and I had received an older version. 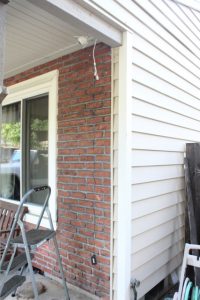 Power is important for a secutiry camera. If the power source is in a place where someone may simply unplug it, it will totally defeat the purpose of having the camera in the first place.  I was able to use an extension cord and pull power from around the house.

I am a little concerned, as the power adapter does not seem to be weatherproof.  We will see as spring in the NW can be unpredictable, it will see some rain at some point.

Even with a 10’ power cable it isn’t going to get you to far.  I did look on the EZviz website, and I did not see any extension cables as you find with other camera brands.  May want to take note of this. I am sure you could find an extension on the internet. If you are deploying many of them, you may want to consider installing AC outlets, close to where they will be located. I would recommend with in 5 feet. That way you have some extra cable to make sure the cable routing looks good and you don’t have it strung across your wall.  You would be surprised when routing cable neatly how much extra slack it may take.

Once you get power to the camera, positioning it is a breeze. You can rotate the camera and swivel it around on the ball mount to adjust the view.  The EZVIZ app works well to show you the camera output. For the purposes of this review, I am connecting the EzGuard 1080 wirelessly. I do think that is how most will use it.  One less cable to mess with is always a good thing. 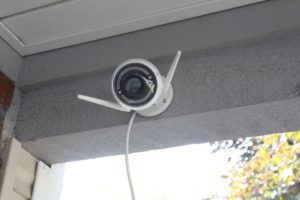 There is is mounted and ready to for power and adjustment.

I was impressed with how little latency there was while I was positioning the camera. As I was looking at the live feed on my camera, It was less than a noticeable second.  As soon as I looked down at my Phone it was showing the current view.

The performance was good. In just a couple of moments you can get the view your looking for and secure the ring on the base to lock the camera in place.

The installation was very straightforward and simple. Now that I have it mounted and working. Continue on in the review and lets go through the EZVIZ app, more features and the smart home functionality.