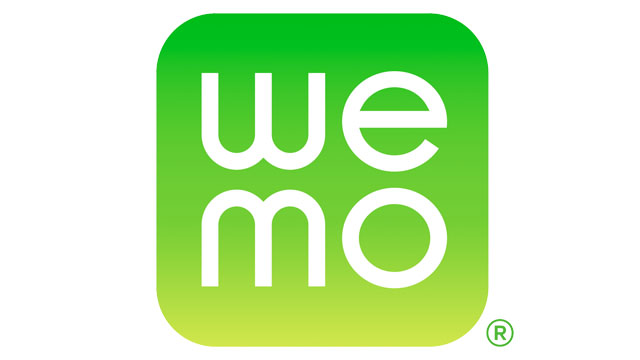 Like the WeMo Light Switch (you have to love Belkin’s simple product naming) this smart gear uses your home wifi to communicate.  The list price of the Switch + Motion is $79.99.  Controlling lights or other devices that might other be left on a lot more hours a day, may give you a reasonable payback of a year or few, but it’s the convenience, and to some extent the cool aspects, that make it a nice piece in the home automation puzzle.   Walking into the kitchen and having the lights come on automatically, then turn themselves off a few minutes after you leave the room is The product itself is really two seperate pieces of gear.  First is a largish external outlet that plugs into any normal 3 prong outlet in your home.  Just plug the device – a lamp, a coffee maker, your under counter down lighting in the kitchen… and then, if you want motion control, figure out where the motion will be that triggers it.  The Motion, is two pieces connected by a thin cable.  one piece plugs into any outlet, and then you place the motion sensor, that second piece, where it will detect the motion you want to trigger the switch.

One application might be to place the motion sensor to spot movement on the first step on your stairs, so that when someone puts their foot on that step, the lights plugged into the Switch part will light up in 2 seconds or so.

The Switch itself has an indicator light, and a manual button.  The light will flash amber if it loses its wifi connection.  That’s interesting, as in our project, we’re about to replace a 3.5 year old pair of router and extender, and they’ve been rather problematic of late as far as the extender goes.  Once every week or so the extender and router stop communicating correctly.  A couple of times a week, it seems I have to reset it.  Well, it will be gone soon, replaced by new Linksys router, gigabyte switch and extender.  Since I installed the Switch + Motion, there has been a firmware update.  It mentioned that it improves operation with extenders.  Interestingly we haven’t had a further problem with the Belkin since that update.

I mention all of that because the extender needed to be reset a few days after I hooked up the Switch.  I noticed because I walked into the kitchen, and for the first time in a week, those lights did not come on.  I looked at the unit, and voila’ it was flashing, indicating no wifi.

Because the Switch and the sensor are not together in one single device – in this case across the room, they too talk to each other over the wifi.  While a Switch with built in sensor will work in some cases, this system can work anywhere in the house.    Perhaps the motion sensor is by the front door or in the garage, but motion there turns on lighting in the living room.   The advantage of having the sensor in the Switch, is that it could operate without Wifi working.

The Switch + Motion is exactly what we needed, the lights come on and stay on as long as there’s motion, but then I have them set to turn off after 10 minutes.  It could be set longer or shorter, but Belkin right now, provides only a finite number of different minute settings before the switch shuts down.

Setting up the WeMo

It’s really straight forward.  The first image shows the Switch plugged into the wall, and then the power cord from our under counter lights is plugged in.

The second image shows the outlet across the kitchen.  The Motion looks similar but no replacement outlet.  You can see a cord coming out which goes to the motion sensor.  The small motion sensor itself is seen in the third image with the Motion itself in the background.    We tucked away the sensor between the Keurig coffee maker and that short wall.  That way the sensor – being set back a bit, doesn’t see into the living room.   Anyone crossing into the kitchen immediately trips the Motion’s sensor. 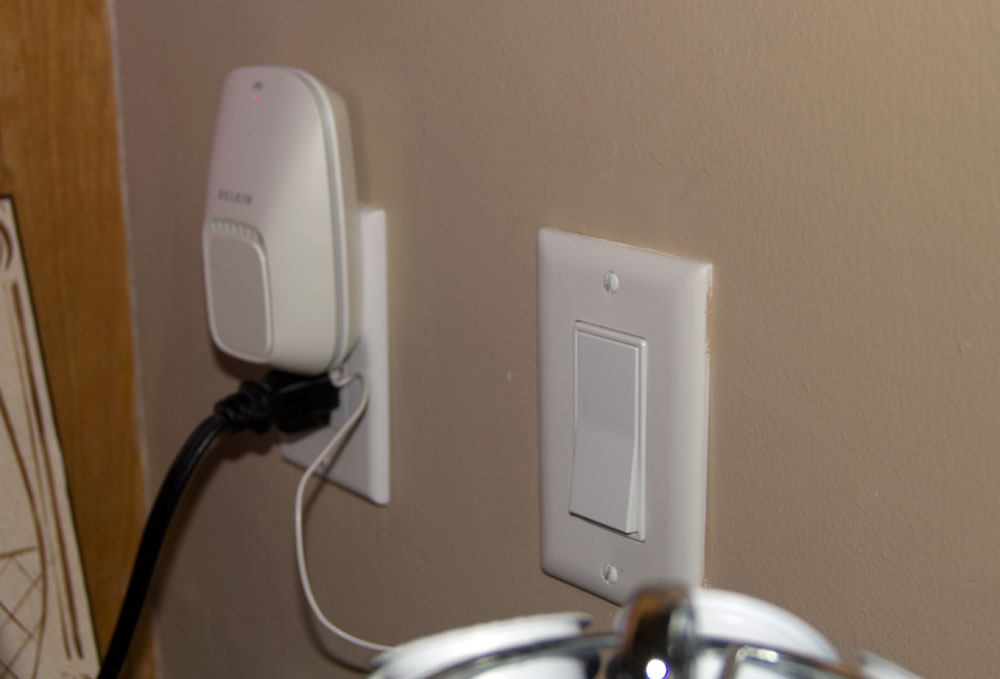 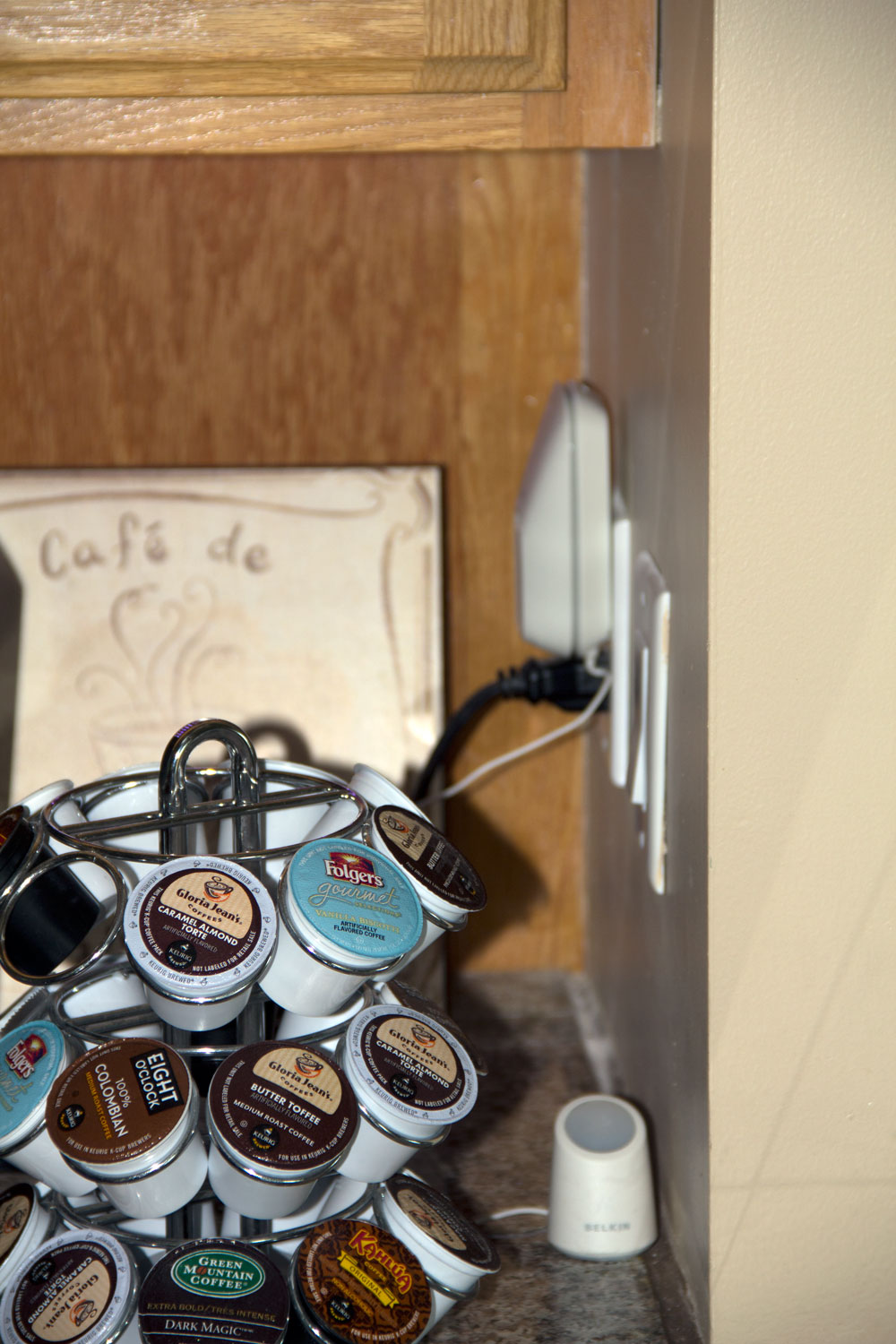 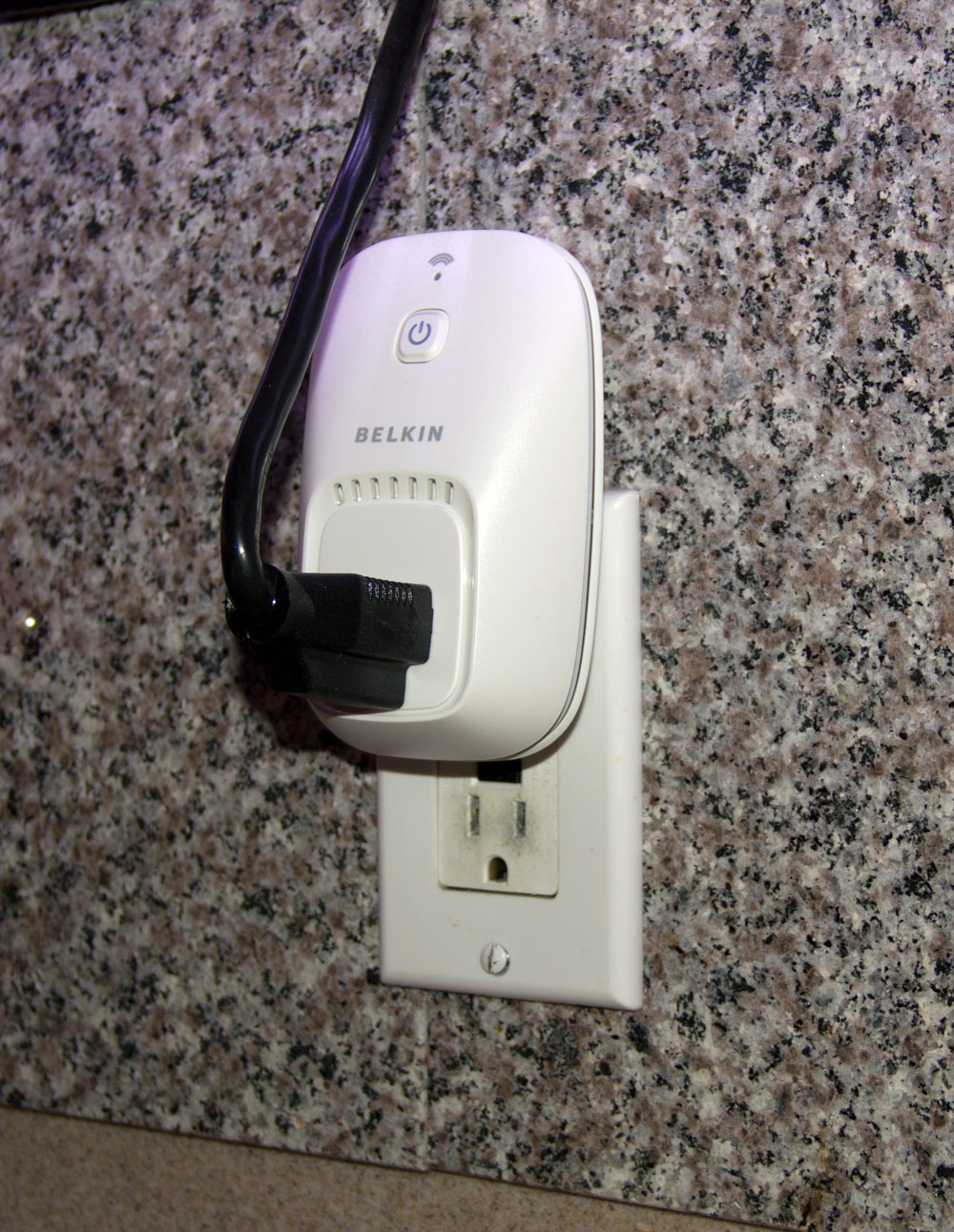 The Switch and the Motion, show up as two separate devices on the iPhone/iPad app.  That would lead us to believe that one can configure one motion sensor – “Motion” to trigger more than one wall Switch.  And that makes a lot of sense.

We’ll verify that in the full review.

Note that the Switch and the Motion are not next to each other on the list.  It finally occurred to me that the Belkin WeMo app lists the devices in alpha numeric order.

Translated, that allows you to arrange the order of the various Belkin WeMo devices.  You might start off all the ones in the living room with Living Room, or just use a numbering scheme. But it gives you control to organize!

Below are some of the main WeMo app screens for the Switch + Motion.   Each is described.  These images are cropped, click to see the entire menus. 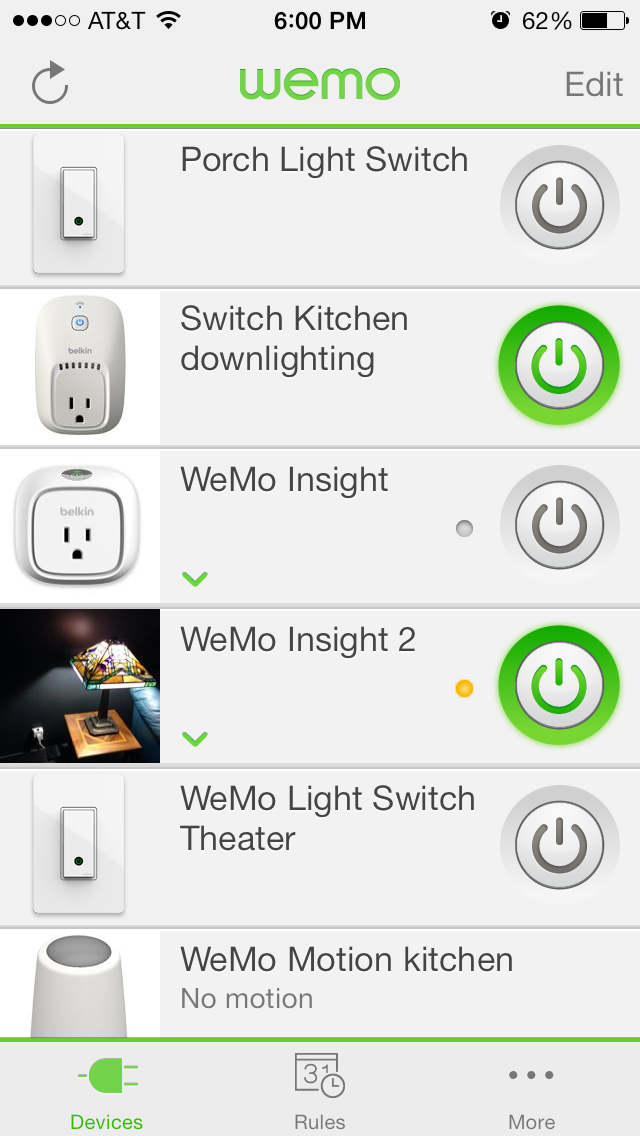 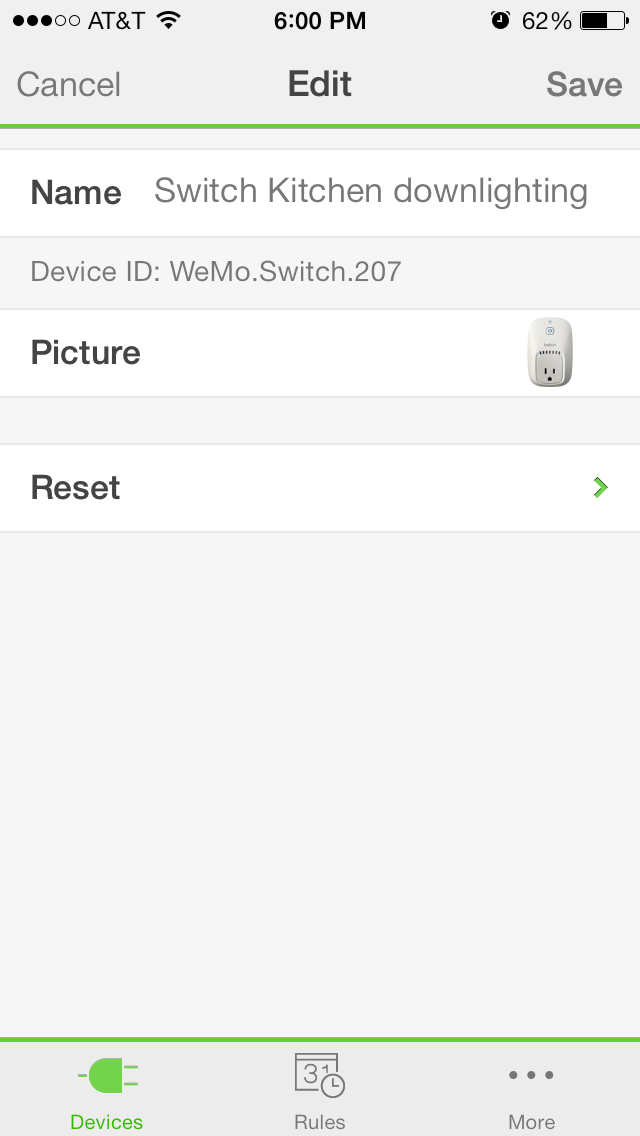 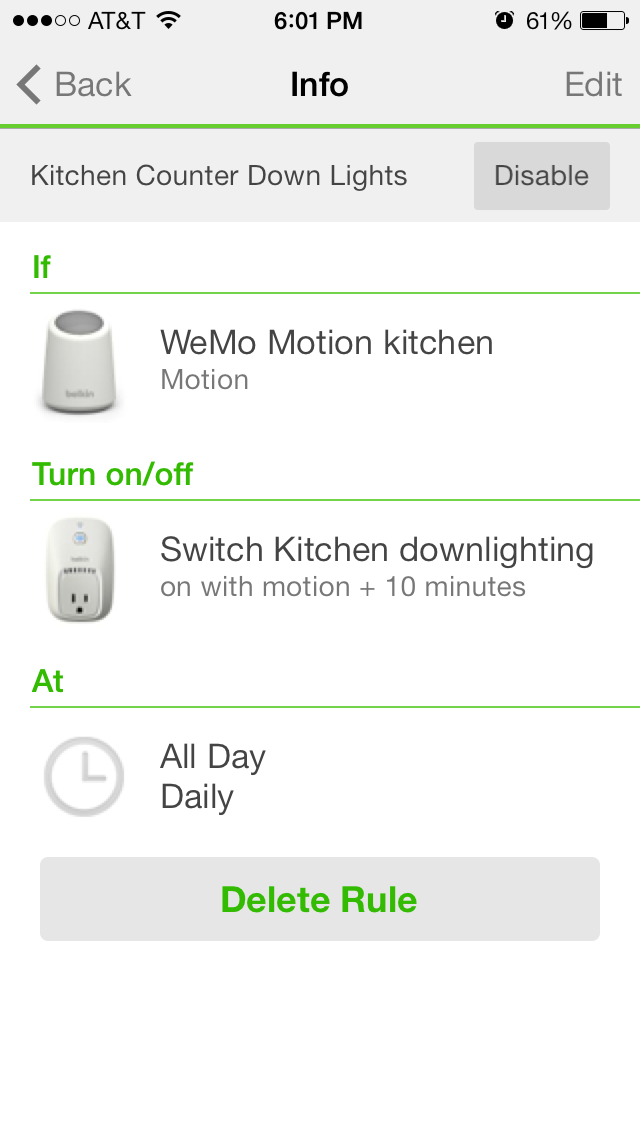 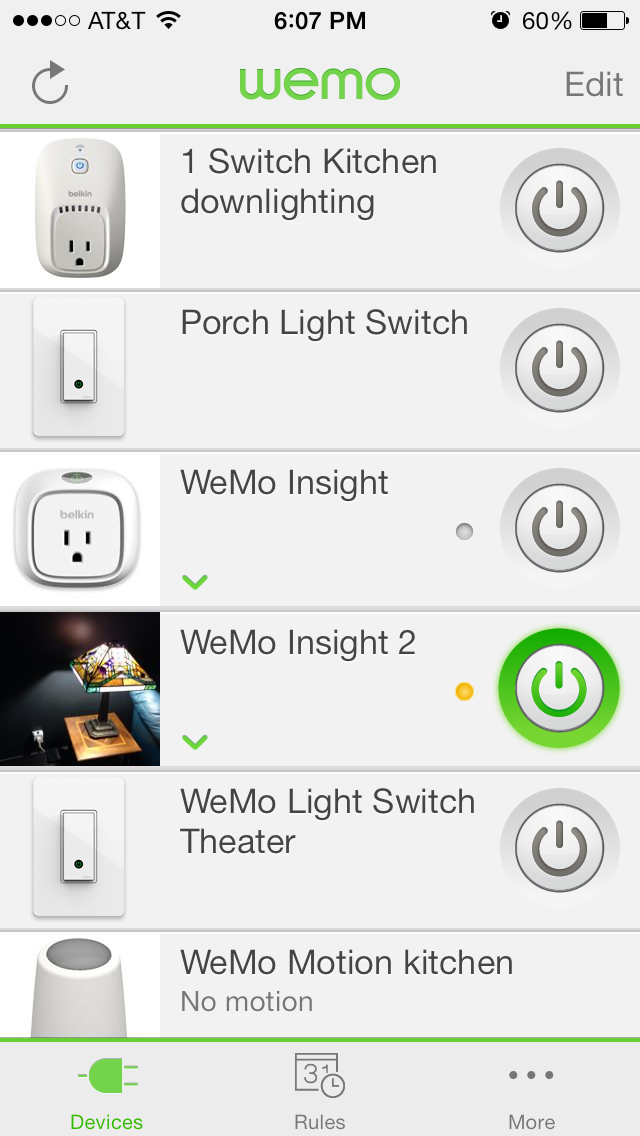 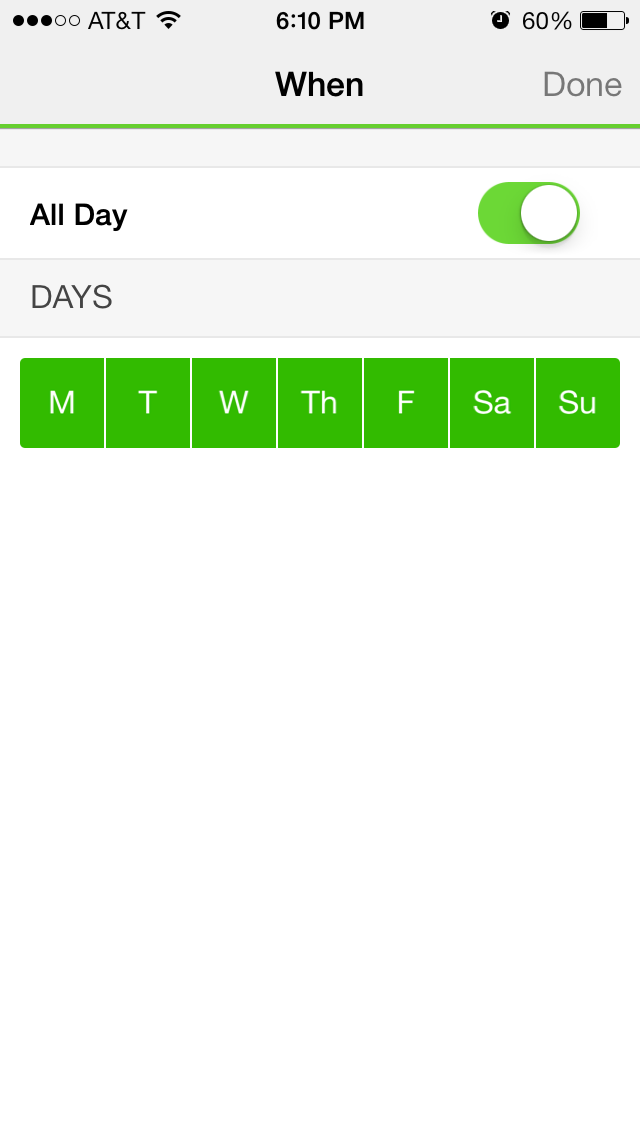 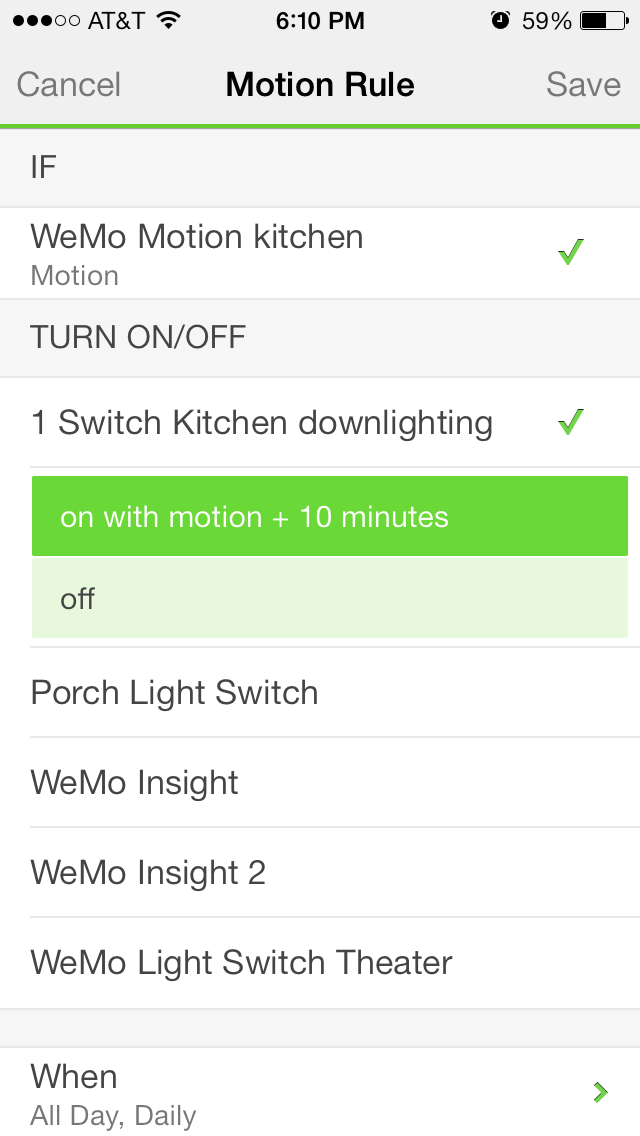 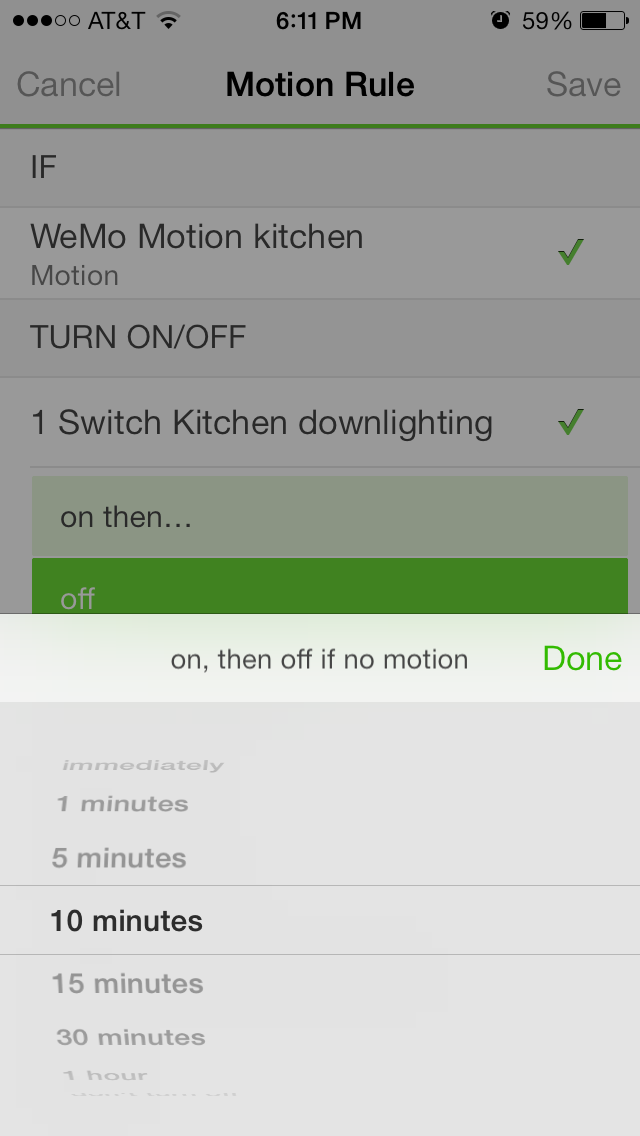 The Belkin WeMo Switch + Motion works extremely nicely.  We’ve had not an issue since the firmware upgrade designed to help WeMo devices to function better when an Extender is used with a Router in your home.

Our own setup, if turning on the Counter down lights, has likely reduced the total time of day usage from about 6-8 hours to perhaps 2-3 hours a day.  With the lights drawing about 35 watts (about 15 feet of rgb LED strip lights), you wouldn’t get rich from the savings, but here in California, that 4  hours a day savings, works out to about 3 KW a month.  At our top tier that’s a savings of about $1 a month.

Once you figure out how to set up the capabilities of Belkin’s Switch + Motion in the app, (it’s not as intuitive as it could be), life is simple.  You can manually override the motion functions with the power button on the Switch, or by just turning it on and off from the app itself.  I worked only with the iOS app, but Belkin also offers an Android app, as you would expect.

If there’s a complaint, between the gear, the wifi, and our RGB LED under cabinet strip lighting, it’s that it takes about 3 seconds from motion until lights on.  At least 1 second of that is the lights themselves, so not bad!

I think the WeMo + Switch is pretty cool.  My wife thinks its great.  On only when needed, and no having to run around to turn off the lights at the end of the evening.

At $79 this WeMo is hardly inexpensive, but the pricing is in line with other smart gear.  Prices for products like this will likely drop significantly as they become more popular.  Depending on what you are using it for, one could save you some significant money – several dollars a month on your electric bill, while making your life more convenient.   Most likely the range of control from the apps will be expanded to provide more variations.  For example the WeMo app allow for turning on (or off) at sunrise or sunset, but there’s no easy way to have it turn on 10 minutes before sunset.  .

Very bottom line?  The WeMo Switch + Motion works well.  Belkin offers a home automation solution one device at a time, rather than a fully integrated whole home system.  Still, they will keep adding devices, and there is a compatible service that allows you to build multi-device instructions.  I find I have created a few rules for the six WeMo devices (5 installed) here, and it’s all very manageable from the iPhone app.  I’m not sure I’d want to 25 separate light switches, 20 outlets, and other devices  based on this straightforward an app, but again, apps – that is, capabilities will evolve.

We really put this WeMo Switch + Motion to good use, and it serves a practical, green solution.  I would say if you have a good reason to want one, that is a good place to put it, and the cost seems reasonable, definitely go for it.

I’ll give it a Pretty Cool!