KEVO BY KWIKSET – PAGE 2: Installing and Configuring the Kevo lock, FOB and Keys, Cosmetics, the Kevo Experience and Summary (The Bottom Line)

Installing and Configuring the Kevo Lock

I am not a handyman.  Oh, I’m decent with tools, but lost interest long, long, ago.  We have a local handyman we use for the usual variety of things around our house (aka, our Dream Home Project).  Our handyman was by recently, doing some work on some fencing along the side of our house.  I had been staring at the Kevo lock for days, never getting up the ambition to install it.

I did the only smart choice to get things moving along.  I asked our handyman to replace our existing deadbolt with the Kevo.  I wandered off, to do some writing, and in something between 10 and 15 minutes (closer to 15 I think), he called me down to show off the installed lock (he loaded the battery compartment with the 4 AA batteries as well).  From our conversation, be aware, there were a lot of parts, screws, etc. and even some wiring to connect (since the outside of the deadbolt has lights – and sensors, and derives power from the inside part, which has the battery pack).  Our handyman said there were no challenges to deal with.  That’s a good thing!

BTW, we’ll be changing out our front doors in the near future, in case you are wondering from one of the photos, why I chose a satin nickel finish Kevo, when the rest of the handles are polished brass.

Back to the installation.  Now it was my turn.  I followed the instructions, to pair my phone to the lock.

It worked out this way.  Access is needed to the inside of the indoor portion of the lock.  The top slides off easily (no screws or fasteners), exposing the battery area, and a couple of buttons and switches. as you can see in the photos.  In one photo, my finger is pointing to the pairing button.

With my phone in hand, I pressed the small button in the lower left side of the exposed section. (I already had made sure my phone’s Bluetooth was turned on, and I had previously gone to Apple’s App store, and downloaded the Kevo app.)

I then touched my phone to the lock itself, up by the top corner.

Bingo, they paired.  Talk about easy.  To finish part 1, all I had to do was slide the cover back on.  It may have taken my handyman almost 15 minutes to replace the lock on the front door, but it took me less than 90 seconds to get it working!

Now it was time to see if it worked.  Coward that I am, I decided to try the door, while the door was partially opened.  I didn’t want to go outside, and then find myself locked out (not that I didn’t have the regular key on me).

Standing there facing the outside of the door, I touched the “outside” of the Kevo.  Bingo!  The blue led lights on the lock start spinning, and a couple of seconds later, the whirring sound of the deadbolt locking the door.  Since the door was not closed, I could see the deadbolt extend.  After the door was “locked”, the Kevo’s light ring flashed a yellow orange, (see the image above).

A few seconds later, I touched the lock again.  Again the blue light started spinning.  Again, about 3 seconds later, whirr, and the deadbolt retracted.  This time the light ring flashed green, to indicate that the door was unlocked.

Great, my phone is now controlling the Kevo, so the next step was to see how to get others to also be able to use Bluetooth to work my lock. 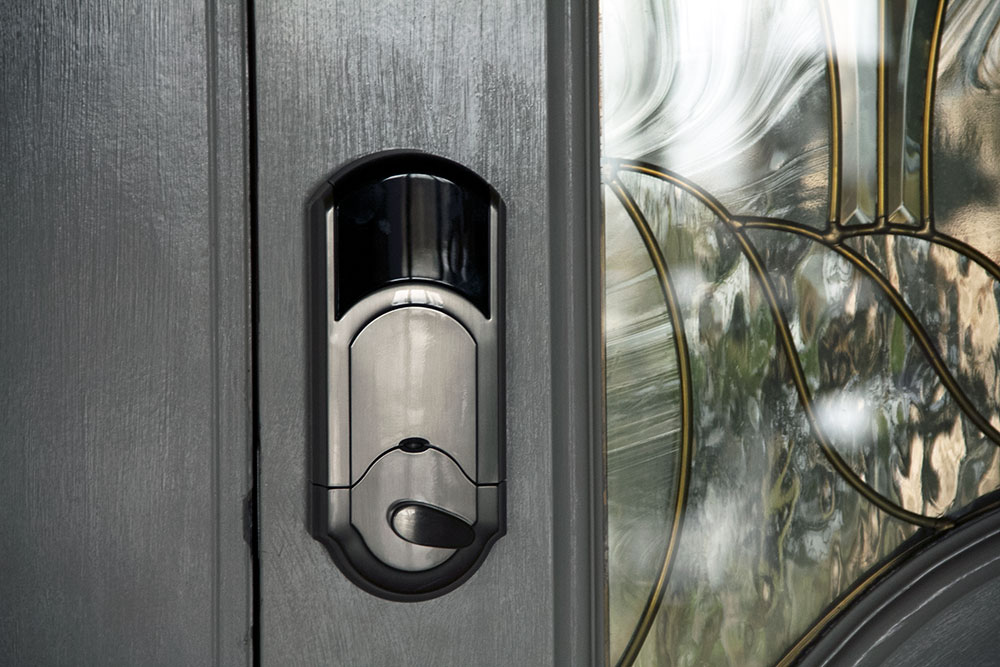 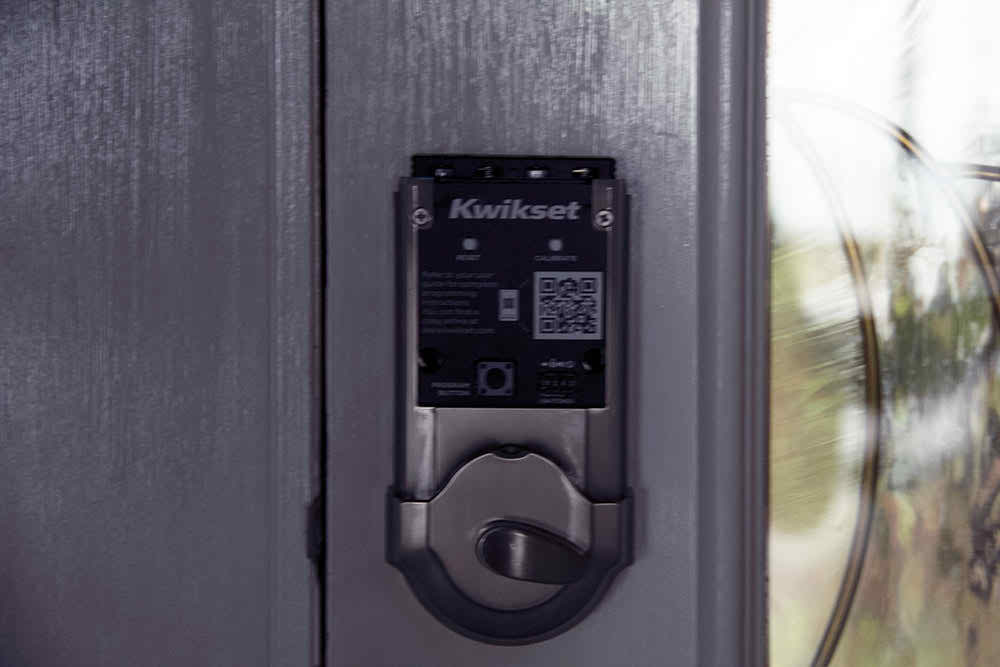 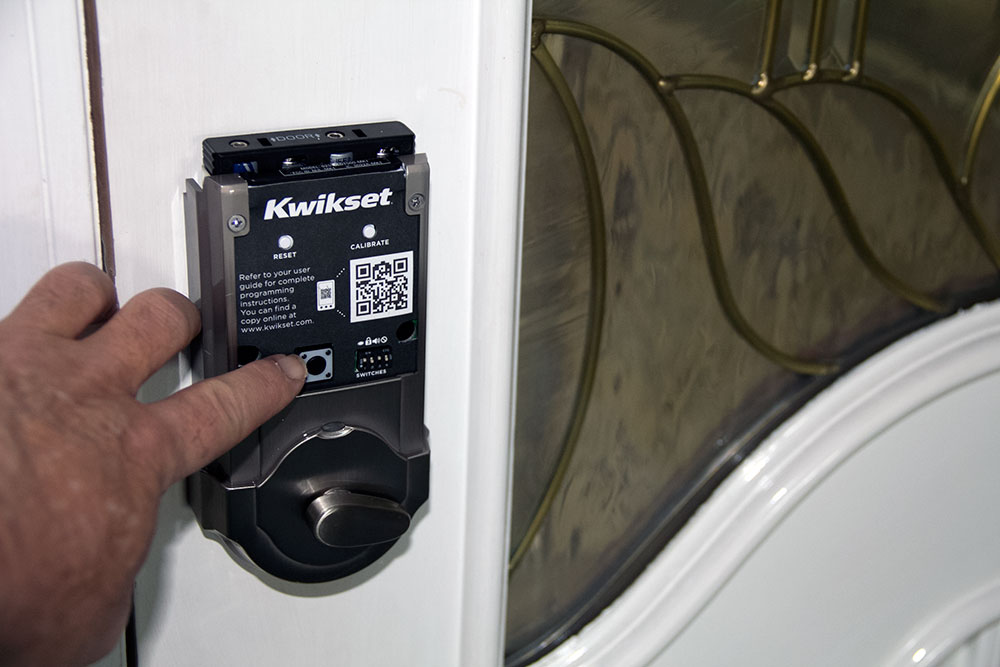 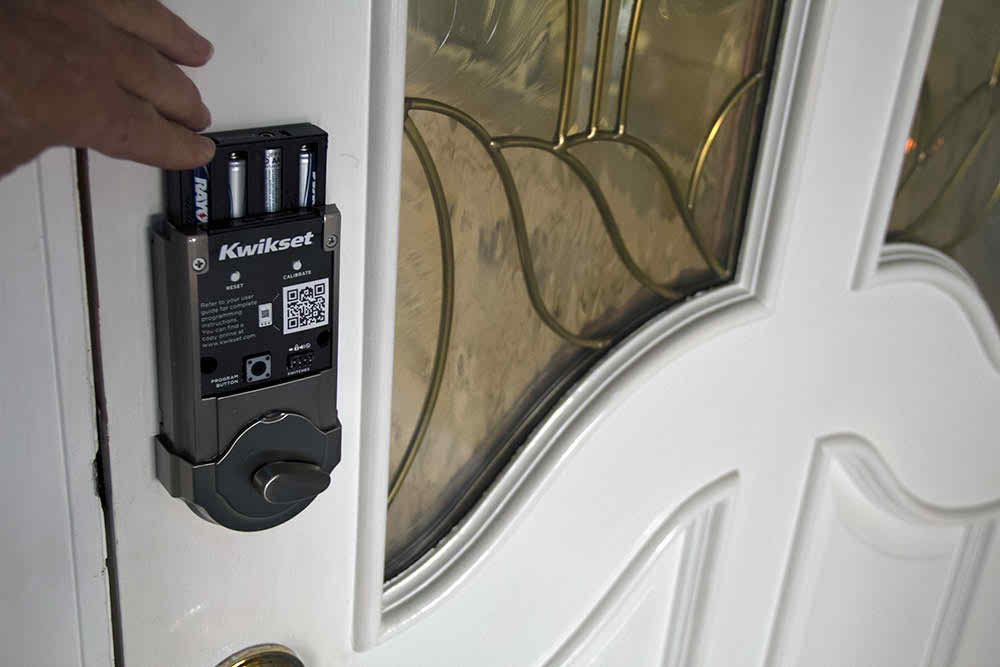 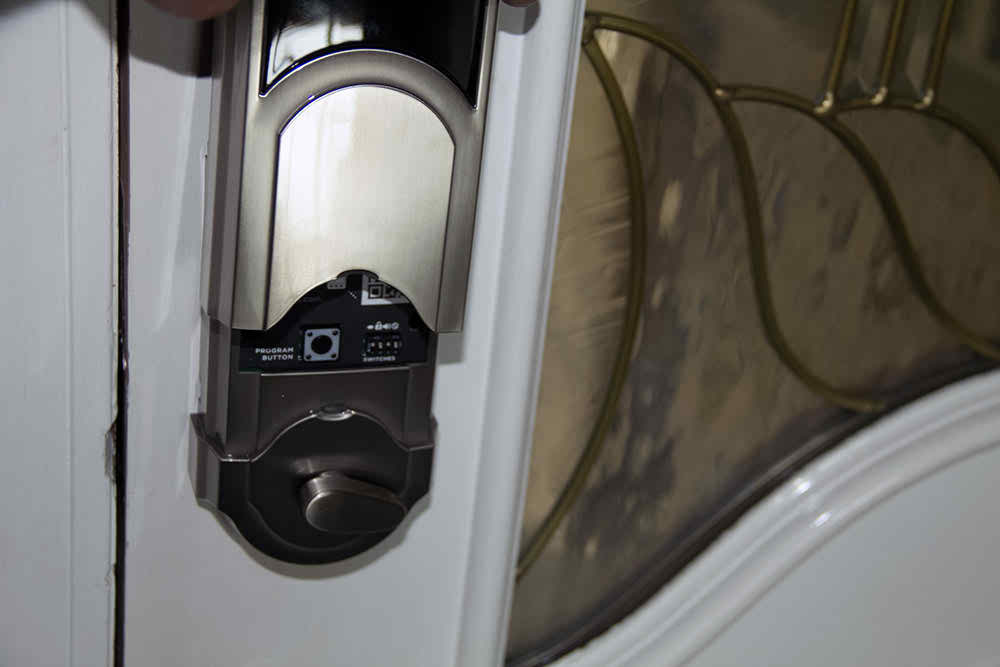 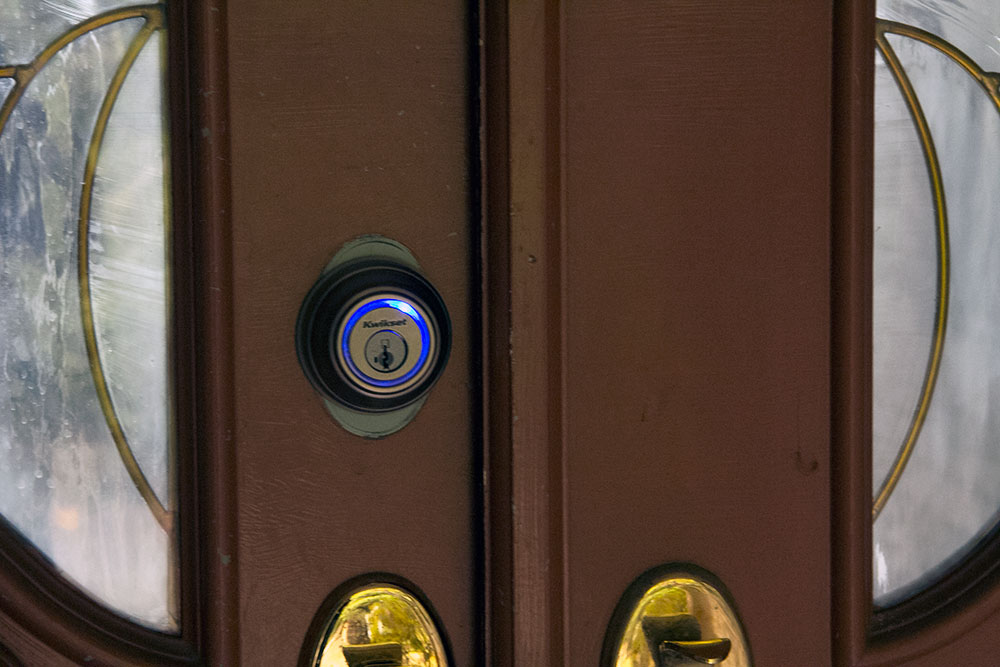 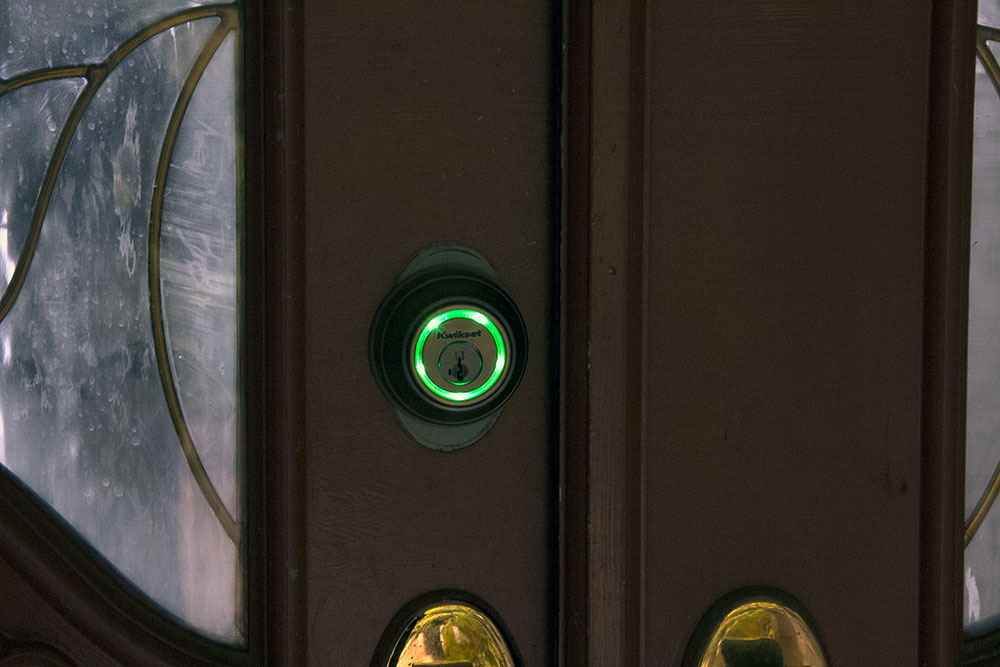 This slideshow shows a number of screens and descriptions about the Kevo App (and the similar functionality if one logs onto the Kevo site from a computer).

The key thing is this, there’s only one primary person (me in this case).  I’m the only one with a user and password that can talk to the Kevo.

In order to have my wife’s iPhone also control the lock, I cannot use the same process of pairing via the button and touching her phone to the lock.

The process for all additional eKeys as Kwikset calls the Bluetooth control, is done by the primary.  I instruct the app that I want to create another eKey.  I have to feed it the email address of the person I want to have it.  I tell it which lock (in case one has multiple Kevos), in my case the one I call:  Front Door

I then tell the App to invite that person –  my wife.  She receives an email, follows the process (including downloading the app), and she’s up and running.

We tested it with her phone which locked and unlocked the Kevo exactly as mine does.

Let’s say I want to add a 3rd or 4th (or more) people, so they can use touch to unlock and lock the Kevo – perhaps in your case, you have a family of 5, all equipped with iPhones or iPads. Just remember that for #3, #4, or #25th person, there’s a fee. When I invite these additional people, there’s a $1.99 charge per eKey.

Considering the lock sells for around $200, I don’t think anyone’s going to care about 2 or 3 or 4 extra eKeys beyond the two free ones.  Again, you buy those extra keys via your iTunes account. 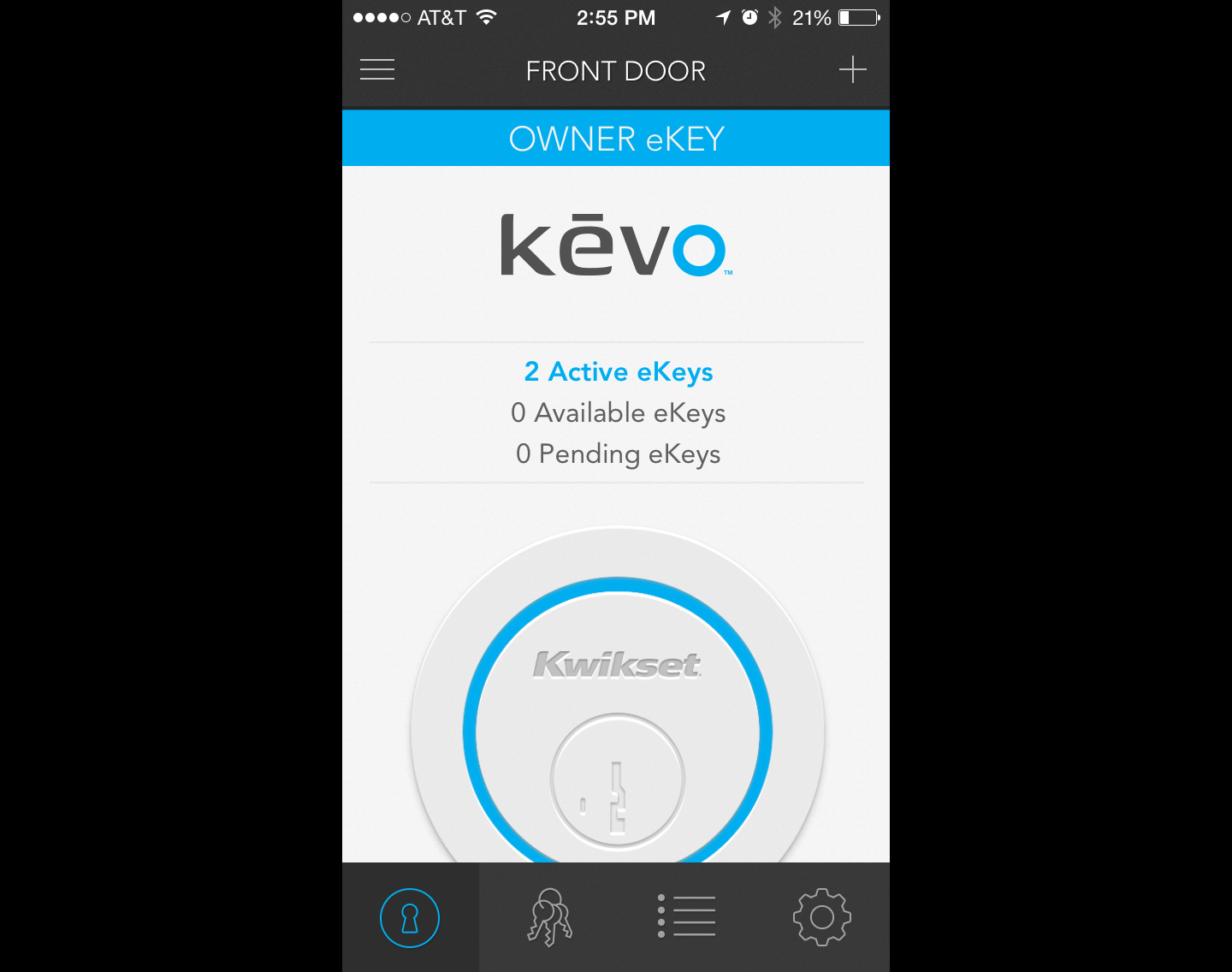 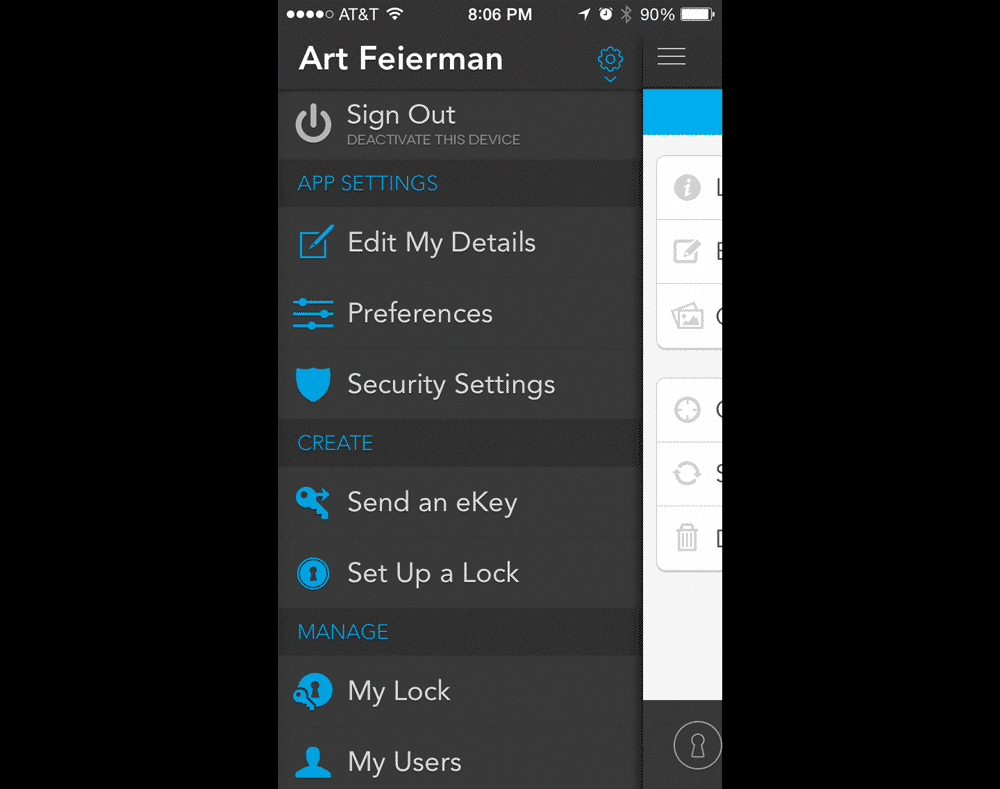 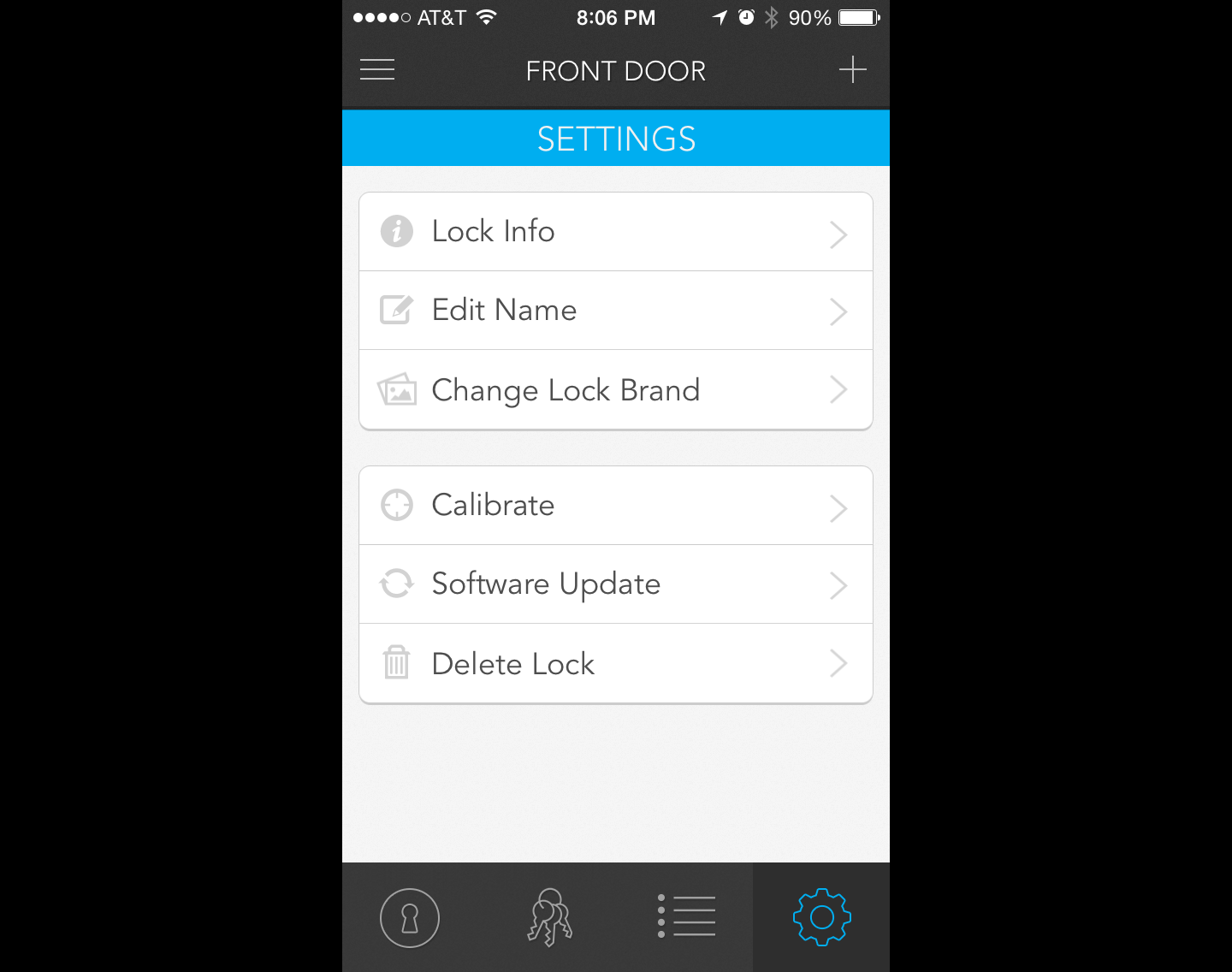 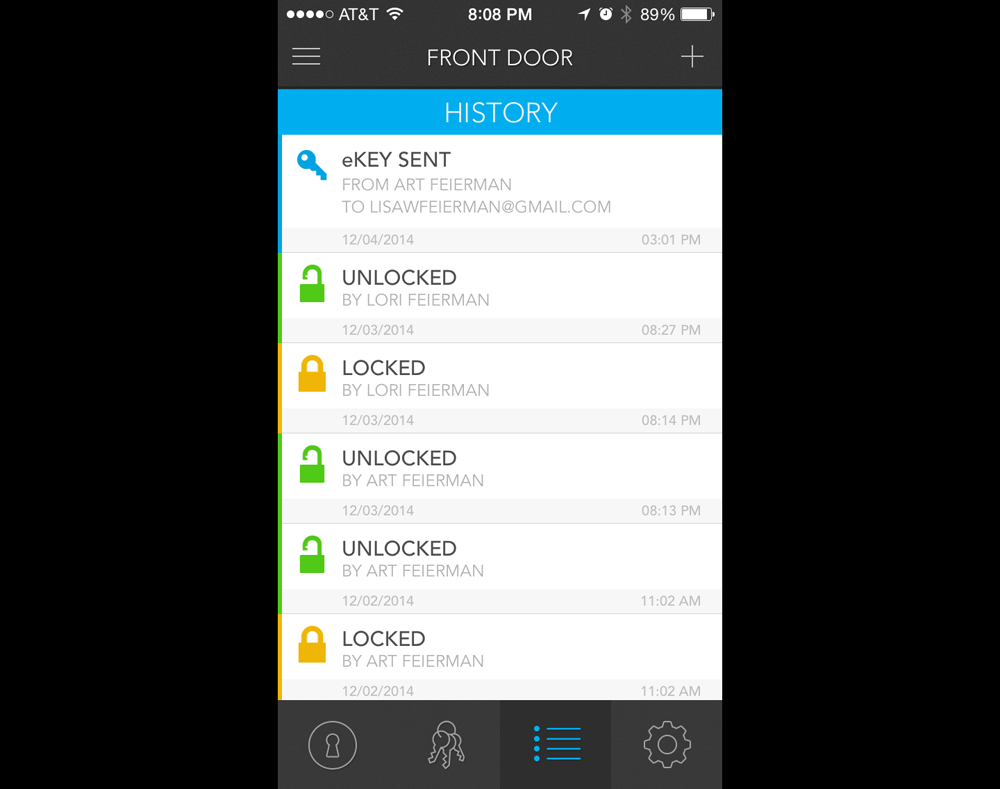 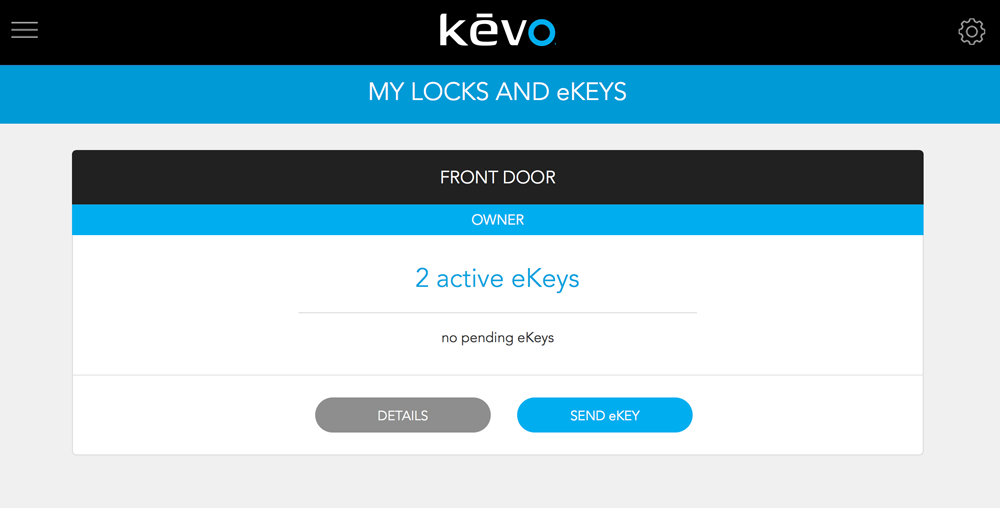 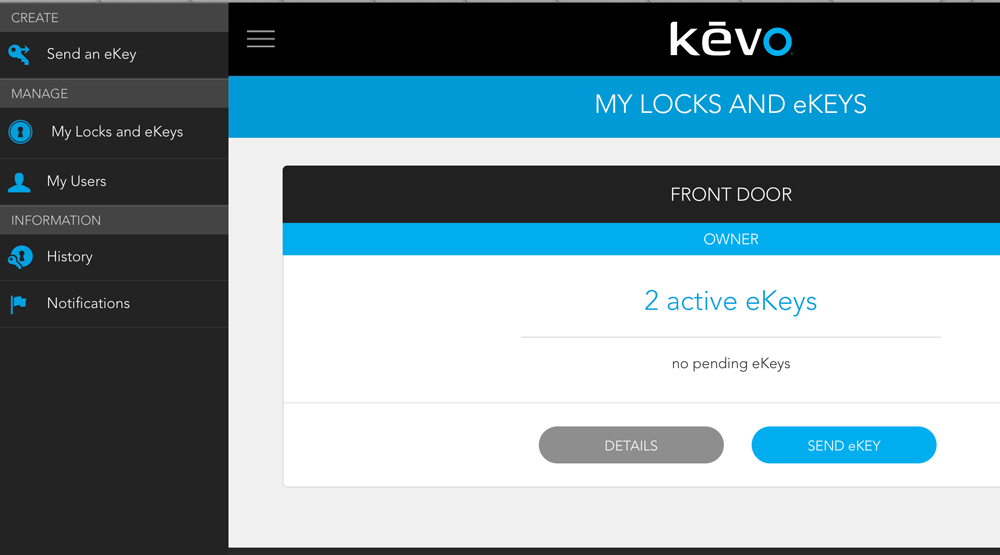 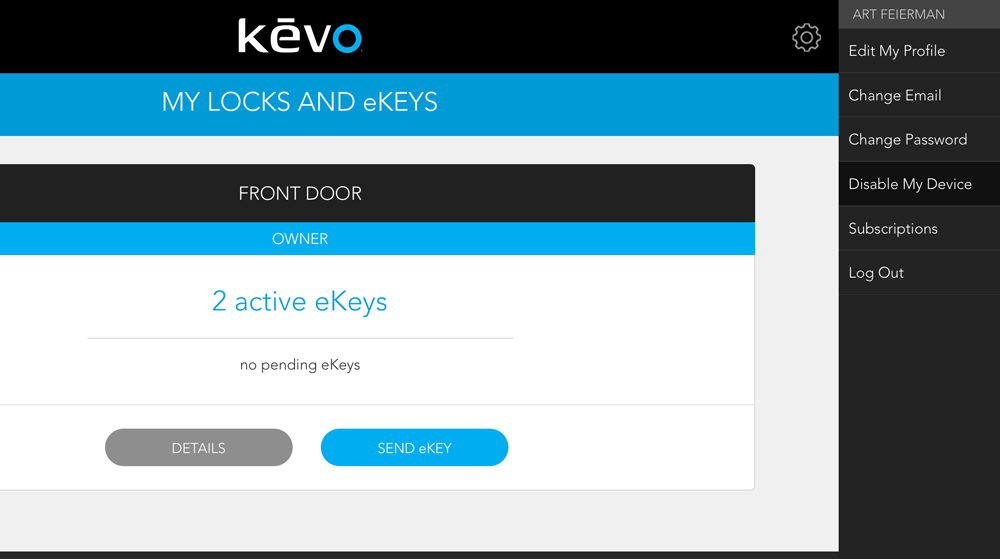 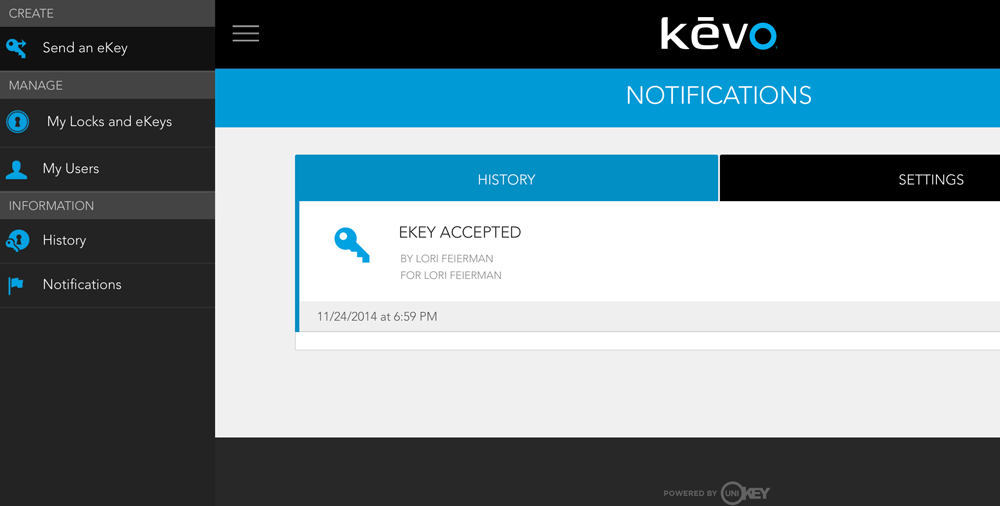 The Kevo comes with one FOB (not sure why I capitalize FOB all the time).  If you have a car with keyless entry, that too is a FOB.  For those not familiar, a FOB is a device that can talk to a security system.  At my old company my employees who needed to be able to open up, or lock up were all given FOBs.  They would wave them past a sensor by the front door, and that would turn off the alarm, log them in.

Same thing here.  The FOB will unlock the door.  It gives you another alternative to the conventional keys, and Bluetooth.

Two traditional house keys come with the Kevo as well.

One thing interesting about the SmartKey design of the lock mechanism is that it makes it very easy to rekey, so that when you buy a Kevo, you can keep using the conventional keys you were using at home with your previous lock.  Of course you can make more copies of the provided keys.

If you want more FOBs to distribute, those are available.  A quick check online found Amazon and Home Depot offering them for about $25 a piece.

As you’ve seen, the outside half of the Kevo is about the size of a normal deadbolt key mechanism.

What’s unusual about the inside half, is that it’s rather large.  With a conventional dead bolt, the inside’s about the same size as the outside, but here we have a large piece, because it has to house electronics, and the batteries.  The photos in this review give you a pretty good idea of how large.

The Kevo Experience, and Bottom Line

I’ve been using the Kevo for two weeks now, as has my wife.  It really is “touch and go” virtually all of the time, and considering I’m always looking for my keys to lock the door when leaving.  Once in a while – every 20 or 30 touches it seems, the touching of the lock doesn’t fully engage the mechanism.  In those cases the blue light spins as usual, but the lock doesn’t lock or unlock, and the lock flashes red.

Touching it again right away, has always worked.  Perhaps its my body between the phone and the lock, and the angle of the iPhone, but it’s so infrequent as to be a non-issue.

All considered I think the Kevo’s pretty great.  “Smart home automation” gear tends to be expensive so the $200-ish street price doesn’t seem out of line, considering smart thermostats are often $200 – $300, and even smart outlets and light switches can run $40 to $100+.

The Bottom line on the Kevo:   It is convenient. The Bluetooth design seems to provide some pretty bulletproof security compared to devices that talk to a home network.  Once the lock is installed in your door, configuring it for the primary user is quick and easy.  Adding more eKeys is a snap (and $1.99 each for the 3rd and beyond).

By being a Bluetooth device it doesn’t talk to your home networks which means it should be as hack proof as Bluetooth itself.   To configure the lock requires physically pressing a button on the inside half, so that eliminates the ability to configure it from the outside.  I’ll take my chances from a physical standpoint, with a lock that requires expertise and physical effort to break, so I don’t think being a “class 2” lock should be an issue.  Anyone who wants in that badly, will find another way.  Besides, if you have a home network and alarm security based on door and window sensors and Z-wave, then someone coming in through the door needs to both take out your network, and break the lock.  Now that sounds like it requires a very talented thief.

I’ll stick with my Kevo, and take my chances.  I’m pleased to award Kwikset’s Kevo one of our Too Cool awards.  It definitely deserves it.