From a hardware standpoint, installing this Smartcode 916 (or other Kwikset Z-wave lock) is basically like installing a traditional deadbolt lock. Remove your old one, install this one!  But there are differences.

The lock supports standard cut out holes of either 2 – 1/8” (54mm) or 1.5 inch (38mm).  Because the lock is “smart,” there are a few extra steps as well. The short version is that you mount the outside assembly (Key, display pad) to a plate on the inside of the door. Then the main assembly of the inside, attaches to that plate. While you are putting these pieces together, there’s a cable from the main assembly that runs through the plate to the outside assembly, to provide power and communications for the display keypad. The main assembly has the motor that opens and closes the lock, and it also houses the electronics.

The SmartCode 916 needs electricity. As previously mentioned, it runs on batteries. The battery compartment is on the inside “half” of the lock, as is the knob to rotate to lock or unlock the deadbolt from the inside.

There is a battery compartment that holds 4 AA batteries, that just slips into place. You’ll need power, of course, to configure the lock to your home automation network. You’ll also find a pair of buttons near the top of the back panel: A, and B. A is used for setting up with a Z-Wave network. Pressing it will change the state of the lock from Inclusion to Exclusion (or the other way around).

In other words, you’ll need to press A once for inclusion to “pair” or “include” the lock into your Z-Wave network. 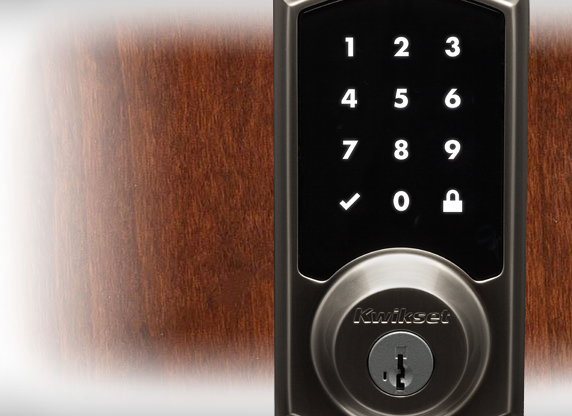 Not exactly rocket science. The whole thing set up simply enough. My Nexia Controller found the lock and quickly added it to the Z-Wave network.  I mean adding in the SmartCode 916 could not have gone any faster or easier.  Score that a plus – for both Kwikset and my Nexia Controller.  (I still wish my controller would support the full feature set, as mentioned on the previous page).  It would have been nice to have unlocking the SmartCode at night, automatically turning on some interior lights.

Before we get to programming the lock, the lock needs to know if it’s on a left or right door. When you first drop in the battery pack (after the lock is installed) it will automatically open and close to determine the correct orientation (“handing”). If you end up moving the lock from one door to a different one, and it is of the opposition orientation you can manually engage the “handing” process.  Again, the documentation, even if just one giant, two sided pice of paper, is very good.

First, let me mention that the documentation was truly excellent, throughout the entire installation process, but especially so, for the programming.

Choice number 1: To Mastercode, or not, that is the Question!

Kwikset gives you a master code option. What that means is that you can program in a single 4 to 8 digit master code. Only using this master code can you then setup codes for different individuals, or delete them,  or change them etc. The Mastercode itself will not lock or unlock the door. Perhaps “Mom” wants to make sure things stay secure. If she’s got the Mastercode, she’s setting up all the other family members’ codes. You certainly wouldn’t want #1 son to set his code to 0-0-0-0, or 1-2-3-4 or any of the other simplistic codes that would stop a burglar for about 10 seconds.

To set a Master Code one presses the Program button for about five seconds until the checkmark appears on the display. You enter the mastercode press lock, then re-enter the master code, and hit the lock button again. Done.

Now you can create multiple locking codes, but only after entering the Mastercode.

If not using a Mastercode (as I chose to do), it’s much the same thing, but press the program button once and the display will appear, and press the checkmark. Enter the 4 to 8 digit user code, and press the Lock icon. Done!

You get the idea. I won’t go through every possibility, including deleting codes but the documentation makes it all very straight forward.

#1: Controls the LED light on the inside. Which blinks every 6 seconds and tells you if the door is unlocked (green), locked (amber) or batteries are low (red).

#2: Relocks the door after 30 seconds. This sounds great if you live in a really dicey neighborhood. You unlock the door, enter, close the door and it relocks automatically. (Nice option, I hadn’t thought about that, even if relatively few will use it.)

#4: Secure System: This is the previously mentioned option of having those two extra digits show up before entering the locking code, to prevent “smudge attacks” (seeing that only some keys have fingerprints). Consider – if you use a single 4 digit code, and a burglar knows which four digits, there are only 24 different combinations. Far less if you use any one of those digits more than once. (For example, if someone decided to use a code of 1212, and our thief could tell that only one and two were used).

When all is done, your codes are in, your SmartCode 916 is talking to your Z-Wave (or Zigbee) network, (and they are talking to your phone, and other Wifi devices), you are all set up, to control the lock by key, keypad, and home automation system. 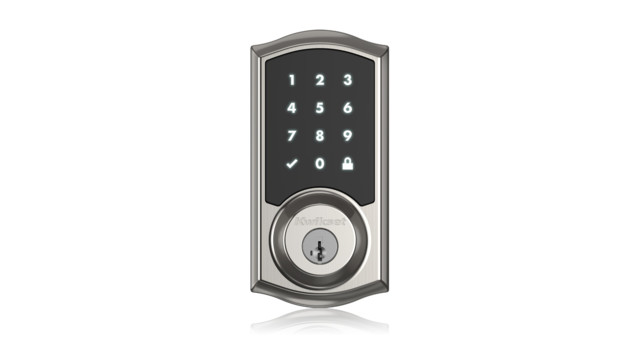 For those of you who would like to see a detailed video of the installation, I found this one on the web: KwikSet SmartCode Installation Video. It’s a slightly different model aesthetically, but seems to be the same, overall, when it comes to showing you the installation and programming.