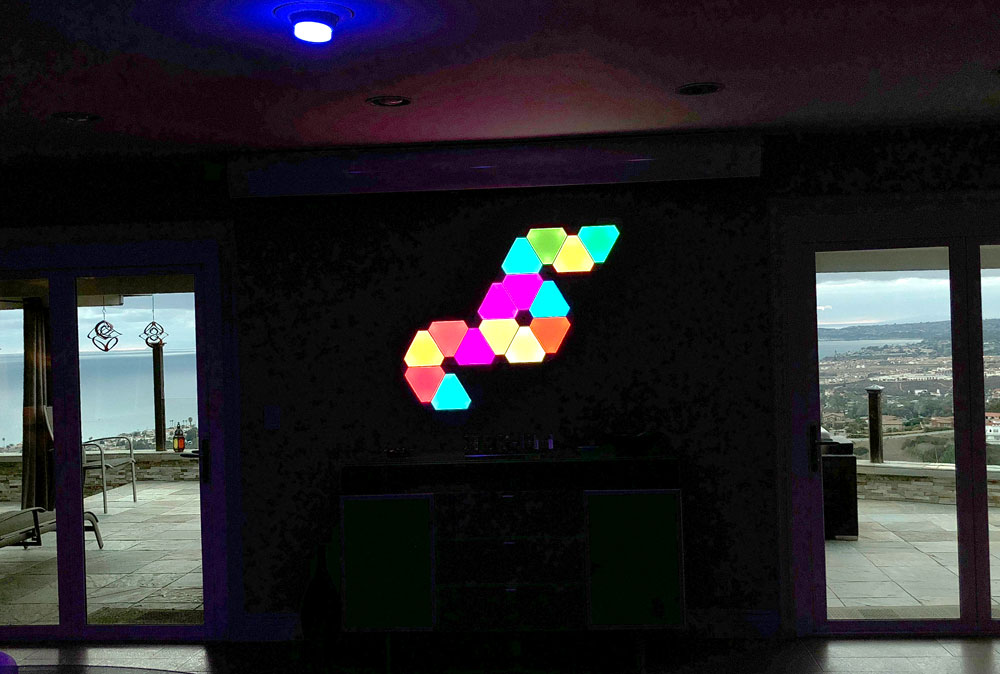 I’ve been excited about the Aurora by Nanoleaf since I first saw a demo and shot a video at CES in 2016 – that’s about 23 months ago. Since then we’ve posted some updates, such as when they started shipping earlier this year.

Finally, this summer Nanoleaf (after much pleading, etc.) shipped me a starter kit to review. The Aurora starter kit consists of 9 of the triangular color panels a controller which supported at the time Apple HomeKit – it now also supports Alexa.  The kit also includes some necessary accessories, that you need to mount it to your wall, and get it working.  And of course there’s the Nanoleaf App to download. 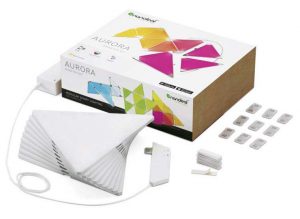 Standard $199 Nanoleaf Aurora starter kit. Does not include Rhythm option.

Now that I have an Aurora mounted to a wall in my living room, I’m downright loving it.

Pricing for the Nanoleaf Aurora – which can found online including Nanoleaf’s own store, at Apple Stores, big box houses, etc is $199 for the starter kit. 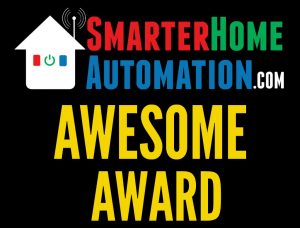 Consider our Awesome Award – our 2nd highest review award – to be a 4.5 on a 5.0 scale. In other words, great product, but some room to be even better.

In addition there are some options available. When I got in my shipment, the Aurora could do lots of things, but changing lighting to music was not one of those. Since the summer, Nanoleaf now offers Rhythm, which adds that capability. As I still don’t have one at the time of this writing, we’ll do the review without having tested that optional ability.  If you, like me have the original starter kit, you can buy the Rhythm module for an extra $49.

Starter kits with Rhythm pricing seems to vary, with stage prices on Amazon at this time (over $300, which makes it cheaper to buy the regular starter kit and add the Rhythm module, assuming Nanoleaf doesn’t kill off the standard version.

These seemingly high prices this fall (2017) may be because of shortages, or newness, so prices may settle down. 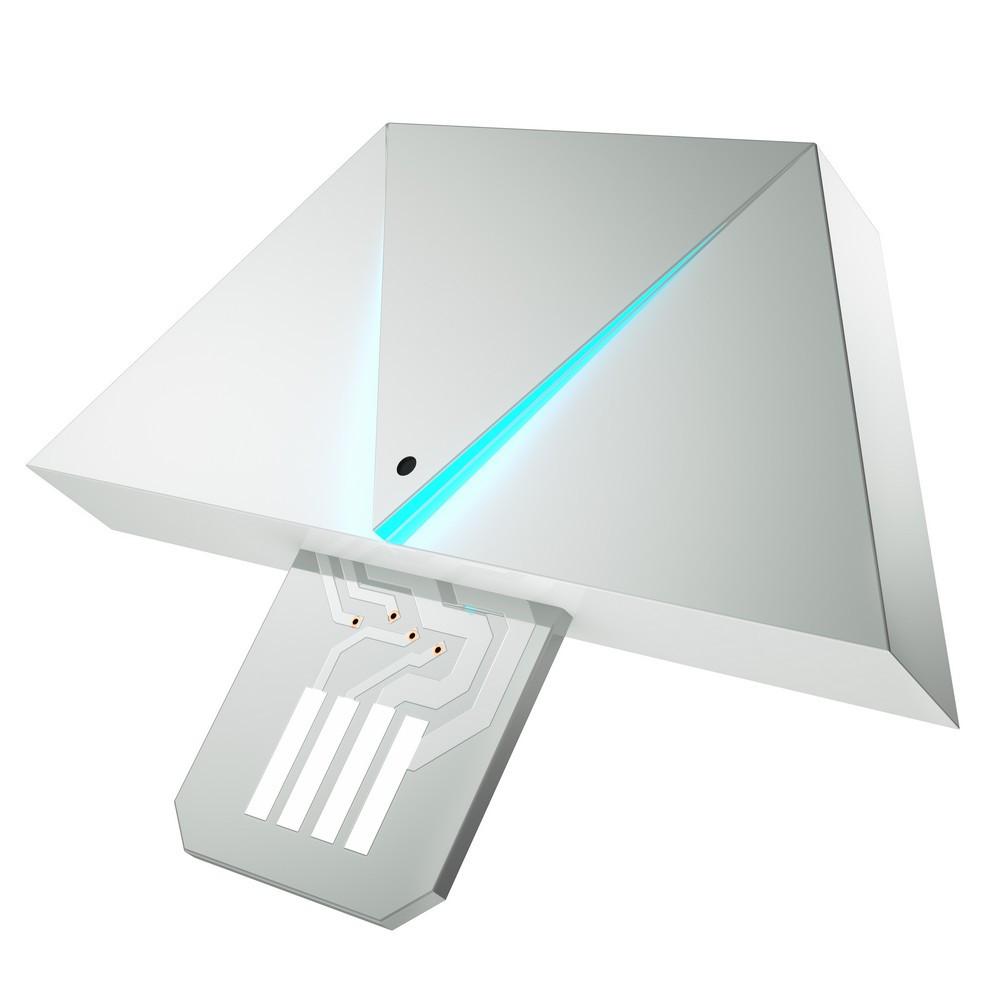 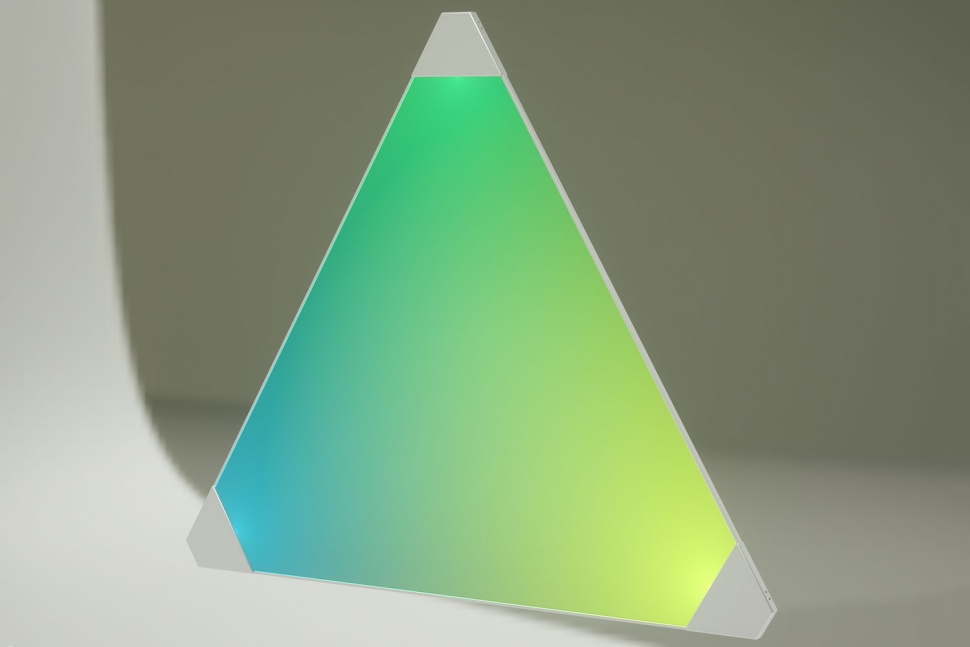 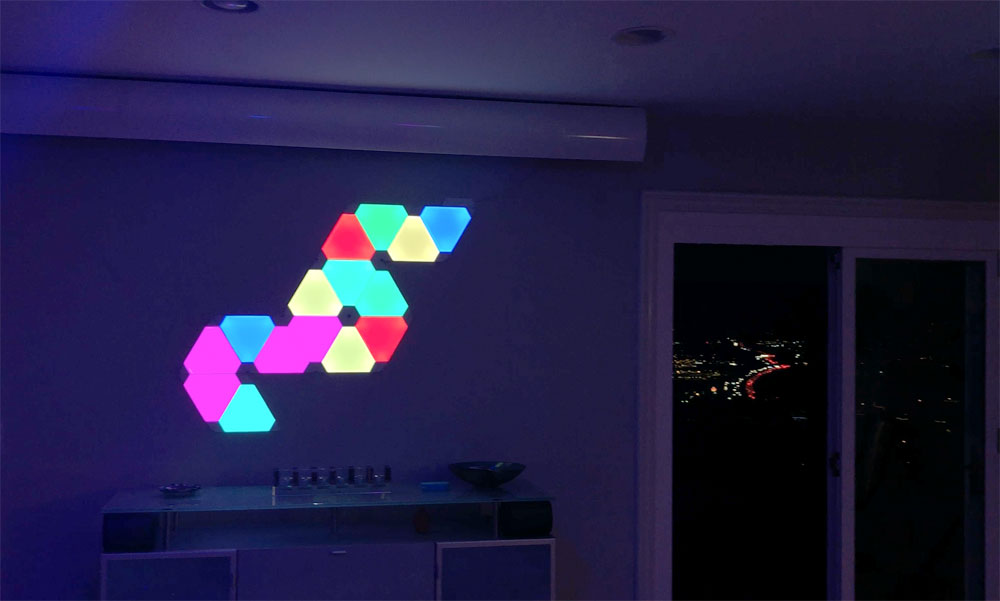 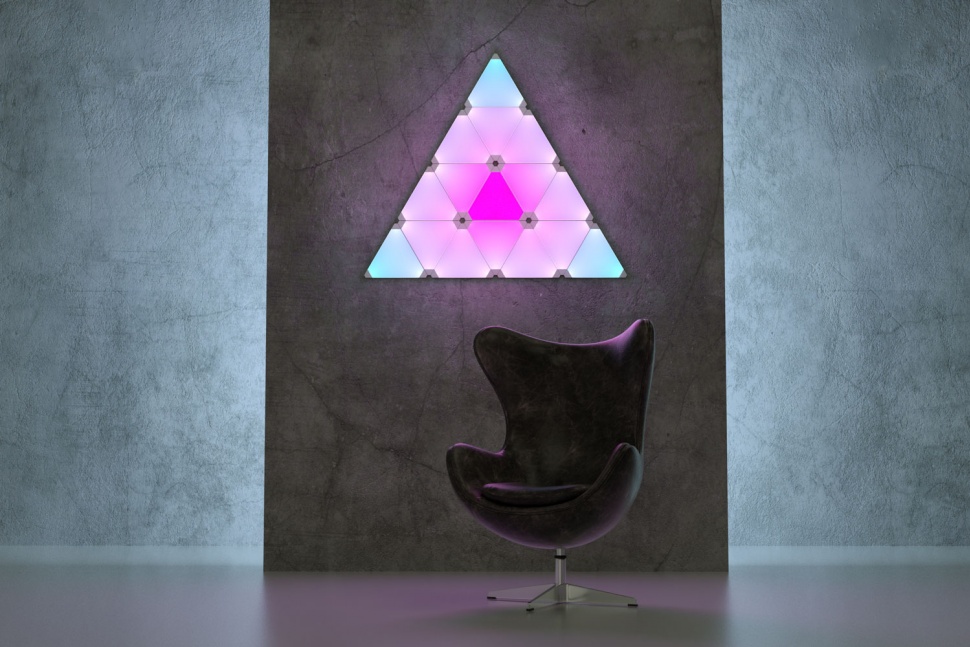 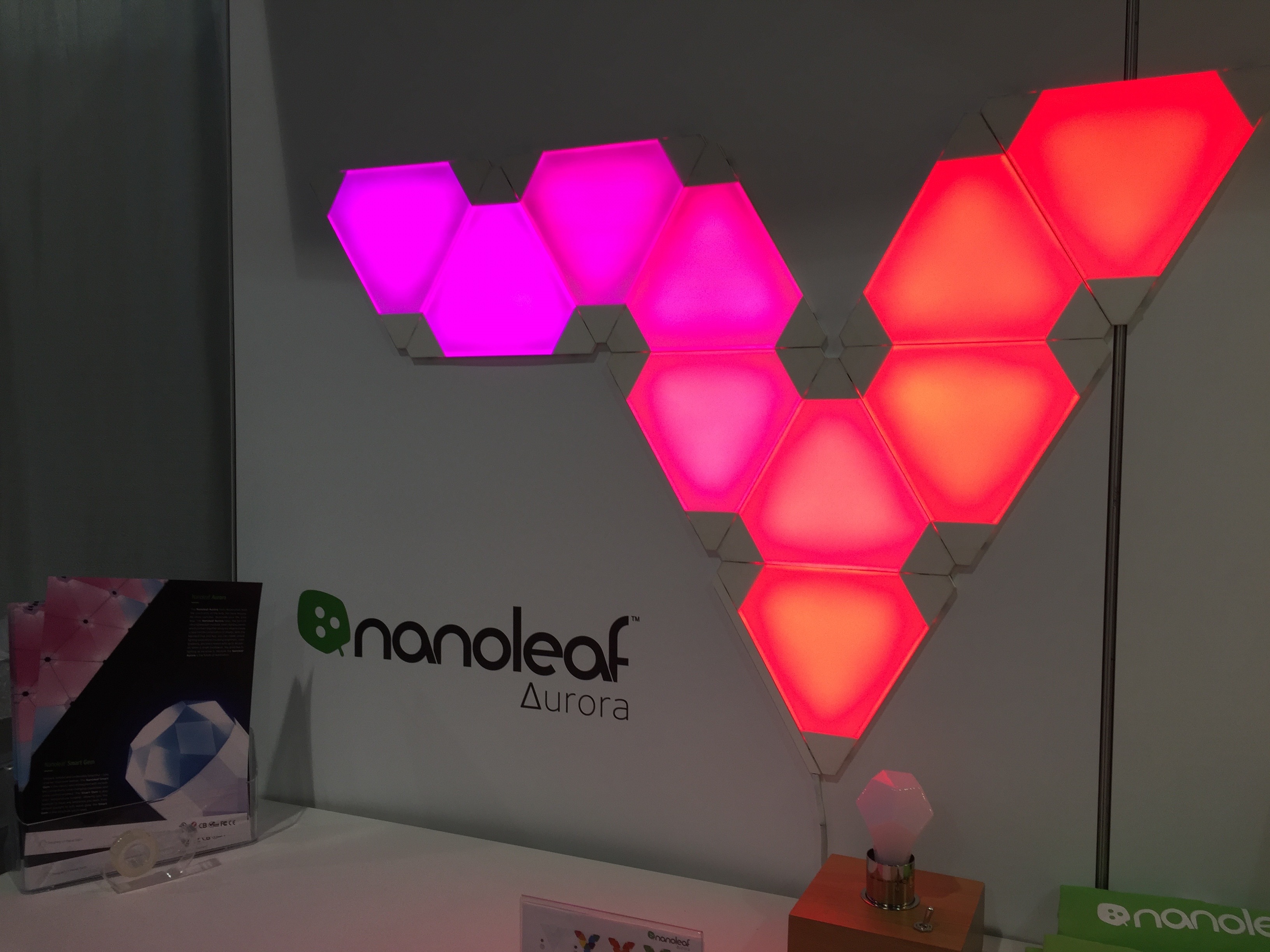 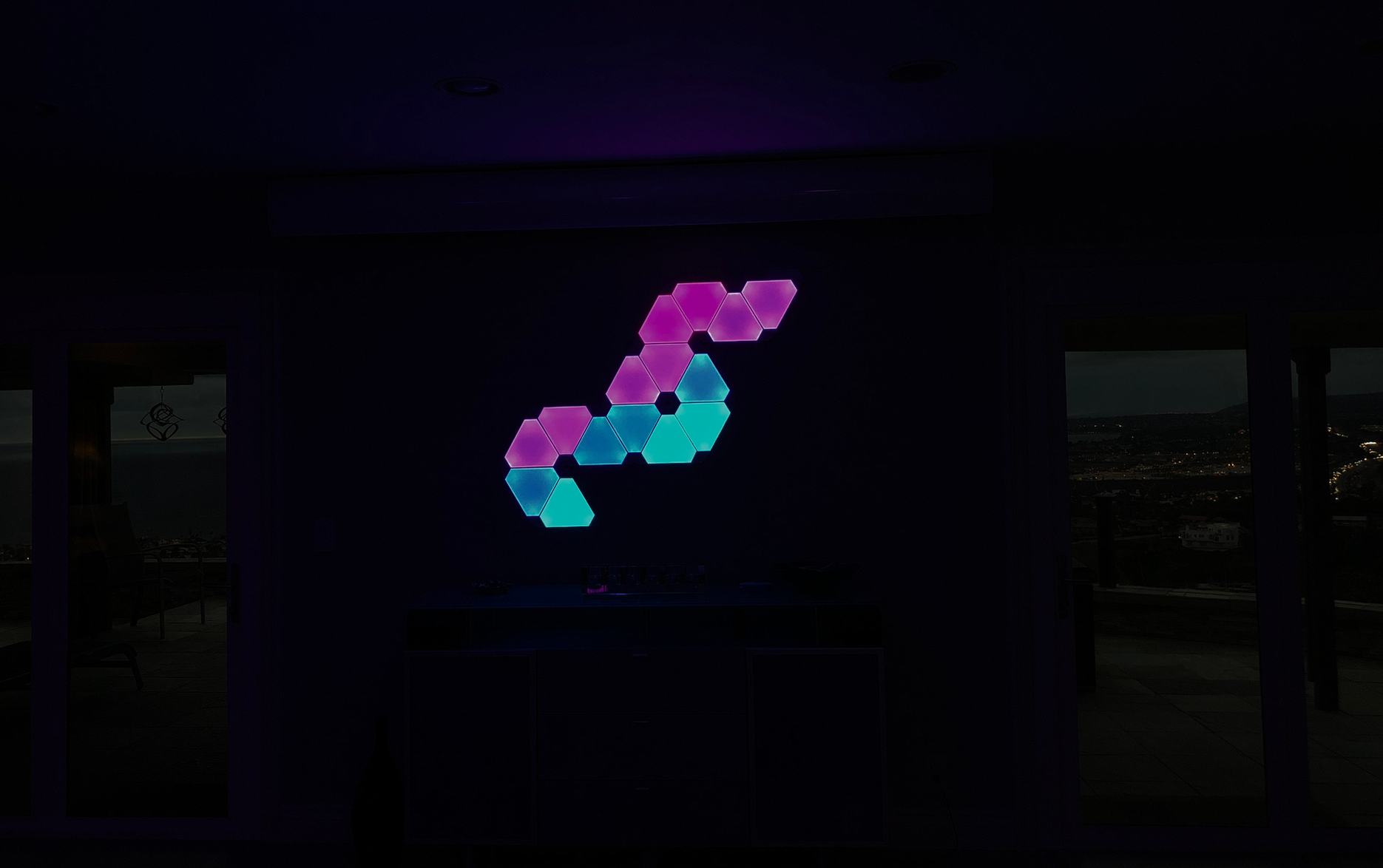 The other, and probably far more important accessory for most Aurora owners is the expansion kit, consisting of three additional triangular panels and, of course, the necessary accessories.

The Aurora controller supports up to 30 panels. Want a really huge display, you’ll just need additional controllers, although I don’t think you can control more than 30 as a single installation and single patterns.

Installing the Aurora in our “Dream Home” – Twice!

Do to the almost ongoing remodeling in our “dream home” aka our smart home project, aka the house Lori and I live in, it took some time before we were able to install the Aurora on our back wall – between our two sets of bi-fold doors leading to our back patio. That same wall has a motorized projection screen. 95+% of the time, if we’re home, and not sleeping, the Aurora is doing its thing, following one pattern or another from the almost infinite choices. The other less than 5%, the screen is down and we’re watching some sports, news, or general HDTV. Primarily we view “TV” and movies in our home theater or Lori’s own media room.

The Aurora was finally live in August, but not for long. After enjoying it for perhaps 2 months, it was time to paint the living room, so down they came. I hoped to put them back up in early November after the painting, but after much consulting with Lori, we agreed that we wanted more than the nine panels that came with the starter kit.

I rushed online only to find that Amazon, and, well everyone, it seemed was out of stock on the expansion kits. No problem, I figured, I have contacts at Nanoleaf, I’ll reach out to them. They were great, but told me basically that there simply weren’t any available, which I took to mean that the Aurora was selling so well, that Nanoleaf needed every panel they could produce, just to do the starter kits.

The good news was that Nanoleaf said that within 2 weeks, there would be expansion kits in stock again. So, I ordered two.

That gave me 15 total panels to work with. Well there’s a lot more combinations possible with 15 than with nine, so, we started trying out different configurations on our dining room table. We agreed (Lori’s idea though), that we wanted to go with something asymmetrical (the original configuration we created was symmetrical, most friends thought it looked like the Wonder Woman emblem or maybe Batman – you can judge yourself from the videos we shot and included.

Two weeks or so after the panels arrived our handyman was back in town, so just last week, he installed our new configuration on the wall – same location. My wife in particular really likes the new look. Me, I think I sort of miss the Wonder Woman-esque pattern. But I do like the new one too.  If I have a complaint it’s that with all those adhesive tabs, there’s no really easy way to just change the physical layout easily.  It would be great if they held to each other securely with only one or two panels being physically mounted to the wall.

Speaking of which, you’ll see some general images showing the aurora part on a ceiling, part on the wall. Just a note, there’s an adapter for screwing in the panels into the ceiling.  Those adhesive tabs aren’t enough, apparently to hold the panels to the ceiling.  It’s that pesky gravity thing!

Next page:  Setting up the Aurora, and a close look at the Nanoleaf (Aurora) App.