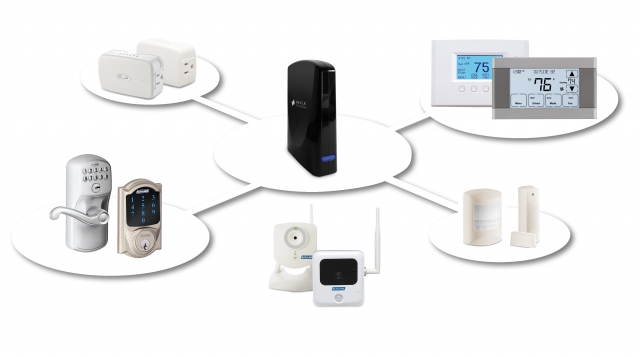 Six weeks ago a Nexia Bridge controller replaced the HomeSeer controller I had been playing with for many months. The HomeSeer is a bit old, so I didn’t want to launch this, our new site with a review of outdated gear. Let me start by saying that the Nexia Bridge is suitable for both the DIY crowd, and for those happy to pay others to automate their homes with a Z-Wave (and Wifi) based solution, but don’t have the really big bucks for Crestron, etc.  The Nexia Bridge will be replaced in a few weeks, so we can review another controller under real world conditions.

Right now the Nexia is acting as the Z-Wave hub for my house, aka, our Dream Home project.

By the time the Nexia was plugged into my router, we had a number of Z-wave devices installed in the home. That list included several wall outlets from different companies , also several smart light dimmers (Linear and GE).  Other Z-wave devices ready to go included Zipato RGBW smart bulbs, and a Kwikset SmartCode 916 door lock.

Nexia was also nice enough to send me some additional Z-Wave devices, including a Schlage indoor/outdoor security camera, and a pair of Linear smart LED light bulbs.

Side note: Linear, product wise, BTW, seems to have their act together. When I was shopping for a variety of Z-wave devices from different brands on Amazon, I found Linear to be receiving especially good reviews reporting little problems, compared to a number other companies’ products. For example, overall, their comparable devices were getting more stars than most GE devices (and others). So, if you need one brand for outlets and basic dimmers, it’s one brand that seems, at this time, to be “a cut above” a number of others.  We have yet, of course, to look at some “higher end” more expensive plays such as devices from Lutron, but that’s coming. – ed.

In addition, I was looking forward to setting up the Zipato smart RGBW light bulb.  It was ready to install, but I never successfully configured it while playing with the Homeseer controller. I truly expected the Zipato to be the real challenge (and it proved to be). BTW, I hear that the newest HomeSeer controllers now support the light, but my Homeseer is roughly a year old and is sidelined at the moment.

My take on Nexia’s basic business model is their goal is to sell affordable controllers, provide a quality, functional set of  apps, and support key partners products.  I see their primary revenue stream, however coming not from hardware.  Rather, I expect that the lion’s share of their revenue and profit stream is their $9.99 a month subscription which, among other things, allows remote access when away from your house and its Wifi. Essentially Nexia is providing a remote IFTTT type capability (IF This Then That), that is secure. (IFTTT so far remains a free service.)  Nexia provides myNexia.com as their secure website. Once logged in, I can even do some things that haven’t been implemented on their apps yet.

That again brings me back to the importance of solid and secure Wifi.

Remember, you need your Wifi at home to be up and running all the time. Otherwise you can’t talk to your controller (to control devices) from apps or online access.

When my Wifi was down, a while ago, I thought I could still log in to do some housekeeping, such as setting up a few automations.  You know, perhaps one to  turn some lights on, 15 minutes before sunset. I also needed to shoot screen shots of the process of building automations to post in this review. Unfortunately, I couldn’t get past that “enter your pin” page. In other words, taking screen shots of menus for this review, or building automations, wasn’t possible without the Wifi…

…Unless:  Unless I had previously (when connected) gone to the App’s settings menu, and turned off the PIN requirement (see Settings menu above), then I could have used the App without it reaching out to the Nexia Bridge.

I hope they give the app its own security (the same PIN would do), so that people can use it off line but still have some security. That would be an nice improvement.

Nexia documentation (not surprisingly) advises to start configuring first the closest Z-Wave devices when building out one’s network. For those not really familiar with Z-Wave, is because Z-Wave is a mesh network. Each device acts as both transmitter and receiver, passing along commands to every other Z-wave device in range.

As a result, the more Z-wave devices, the more bulletproof your home Z-wave network will be. Perhaps, someday soon, Wifi will catch on, and become a mesh network. There is already, at least one mesh based Wifi router/extender combination out there, but it needs to really be part of a future Wifi spec.

After all, as most people with larger homes (or businesses) are aware, if your Wifi controller doesn’t have the range to cover your home or building, you will need a solution. Jon has recently written an article about the importance of a rock solid Wifi network if you are serious about smart home automation – click here.

Truth is, if you are serious about Wifi based Home Automation, as opposed to Z-Wave, make sure your home Wifi is pretty bulletproof.  We have already reviewed some Wifi home automation devices, including the Belkin WeMo products.  But even if you are using a Z-Wave controller with its “bulletproof mesh networking,” you are out of luck if your Apps can’t reach your Wifi which talks directly to the Z-Wave controller – in this case, the Nexia Bridge.

I mentioned recently beefing up my home Wifi (covered in Jon’s article). One reason I had to, was my back patio, my Wifi was intermittent, so I often couldn’t control my Z-Wave gear. If I wanted to dim some nearby lights, I couldn’t.  But, I also have Wifi devices, including my Wifi based Sonos speakers.

Talk about a bummer! I’ve got the Sonos playing in the living room, off of my phone’s music library.  But if I go outside onto the patio, my Sonos speakers in the living room would stop playing because of the loss of the Wifi connection. It’s just one more example.

Let’s get back to configuring the Nexia controller. Following their advice, I started with the closest device, which was a Linear smart white LED lightbulb which was installed in a table lamp nearby.

It really was simple to follow the screen prompts (there are time limits which were very reasonable). Voila! Less than two minutes later, that bulb became the first device in my Z-Wave network. Next came a Linear smart dimmer located at the bottom of my stairs. That was not my intent. Closer than that were a pair of GE dimming smart light switches, but we found the documentation confusing and on first pass couldn’t get the wiring right (the GE switches had one more wire than the documentation explained).

No problem though, even with only a total of 8 devices set up with the Nexia scattered throughout our 3600 sq ft two story “dream home”, the Z-Wave network is proving rock solid reliable.

HomeAutomation TIP: Documentation with many basic Z-wave devices (wall switches, outlets, etc.) is sketchy. A good solution that has been pretty successful for us, is to head directly to YouTube and see if there’s a video relating to the device that has you stumped. We will be linking to the ones we find helpful when we think it might simplify your life when it’s your turn to install the same device. 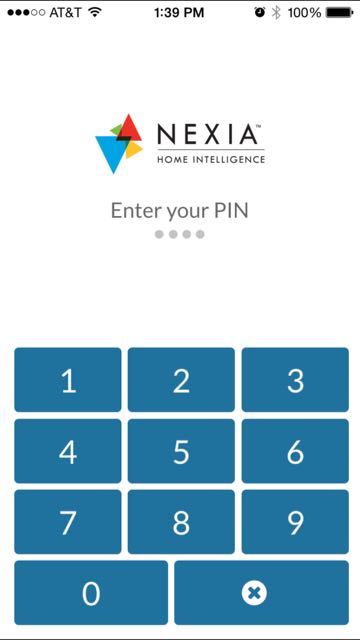 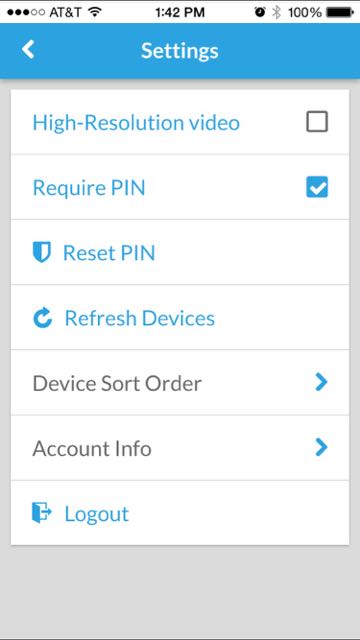 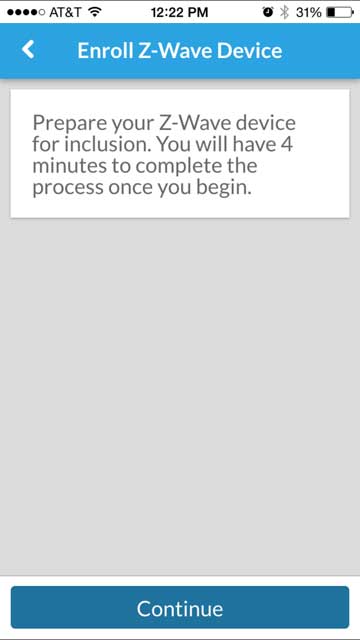 Next:  I installed another dimmer, in what used to be my daughter’s room. Whenever she was back home from college she’d have a tendency to leave the lights on. That can get expensive with a dozen recessed lights in the ceiling. I used to remove several bulbs as “punishment” for leaving the lights on. (By the time she was gone only 5 lights remained!)  Still, she really could spin the electric meter.  Now there’s a single smart dimmer controlling all of them. It is set so that those lights are off by midnight in case anyone should leave them on.  Home Automation saving money!

I continued to add few more outlets and dimmers, and one more smart bulb until I had the controller talking to 8 assorted devices.

I still haven’t gotten around to hooking in the Schlage indoor/outdoor video camera. Again even with a limited number of dimmers, wall outlets, lights and a front door lock, the mesh network works great –all the time! Go Z-Wave.

Also, of note, the App does not support color for the Zipato color bulb (major bummer).  I’ll discuss that on the next page. There’s a work around, but it isn’t “pretty.”  Just remember, standard Z-Wave support doesn’t mean a controller supports every feature that a device has, only “standardized” ones.  Often controller software manufacturers partner with various other device companies to support those extra features.

Because this is a “Dream Home” project I plan to run at least 2 separate Z-Wave systems, as well as Wifi, Bluetooth, etc. all simultaneously and let’s not forget Apple HomeKit. Eventually I’ll replace the first two controllers, so I can review how others work.

On the next page of the review, we’ll discuss setting up automations, groups, looking at events (history), and more of the overall operation.

Not only do we have more screen shots from the iOS App, but also doing many of the same things from my MacBook Pro, using the myNexia.com software.