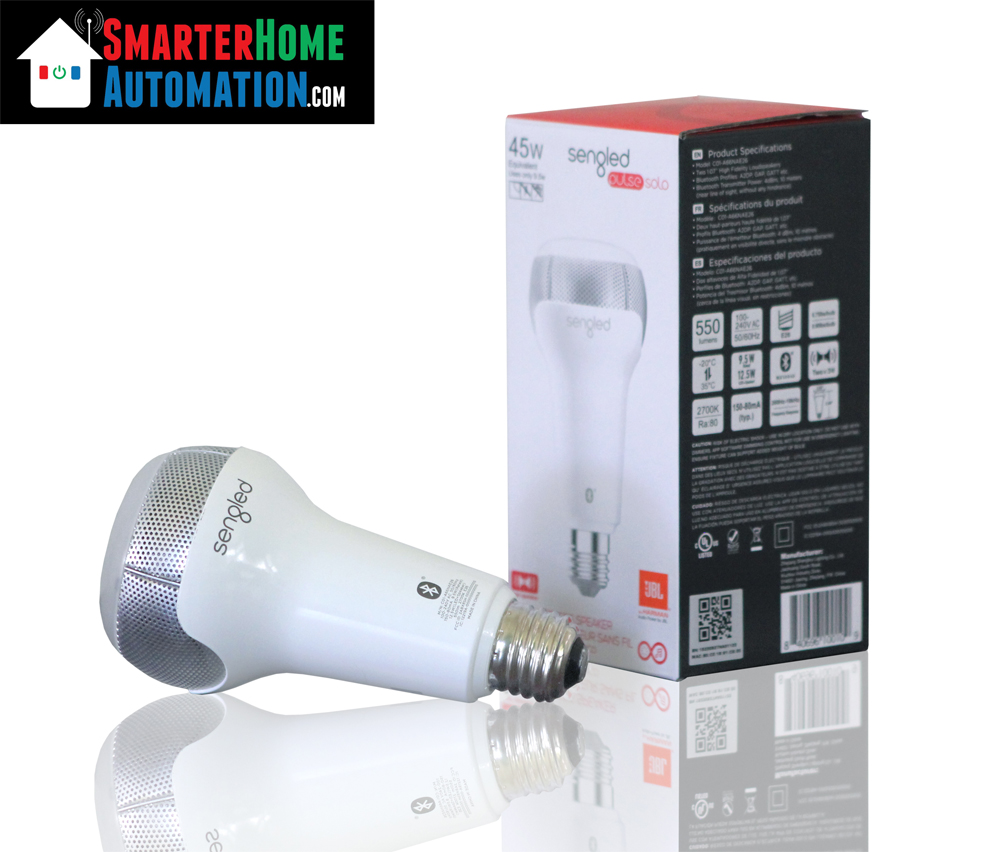 A $59.99 smart LED bulb is nothing unusual but what sets this SengLED Pulse Solo apart is the pair of built in JBL speakers. A single room smart LED bulb that plays music, in stereo, straight from your smartphone or laptop is exactly what the Pulse Solo is.

This is one heck of a gadget that effortlessly provides you with music, and light of course, in any room of your house!

This 550 lumen bulb fits right into any standard screw in light socket just like you’ve been used to since forever. To be clear, these are called either E26, E27 and B22 style sockets. The Pulse Solo also delivers a warm 2700K, 45 watt equivalent glow while claiming only a maximum 9.5 watt draw. As mentioned before, this bulb also contains not one, but two JBL speakers each boasting a clean 3 watts of performance with a moderately full frequency range (between 260Hz-18kHz). The Pulse Solo is also fully controlled through Bluetooth allowing the user to click it on and off, access full dimming controls and so on, but we’ll go into that later. We will also be discussing brightness, color temperature, energy draw and placement flexibility, but first a little background on SengLED.

SengLED is one of the more visible Chinese home automation companies offering products to the US through major retailers like Amazon, Home Depot and Houzz and, as you can probably tell, they have a thing for sticking odd technology into lightbulbs. A quick look on their website shows seven different consumer grade products within three separate categories. These categories include “audio,” “security,” and “connectivity”. Not only have they taken to shoving speakers into light bulbs but also security cameras, WIFI repeaters and other networking solutions. The most recent product of theirs we reviewed is the big brother of this Pulse Solo, simply named Pulse (which received our “Pretty Darn Cool Award”).

The more expensive Pulse comes with two floodlight style bulbs, each with a built in speaker, which connect over a combination of WIFI and Bluetooth. They even allow for added “satellite” speaker-bulbs which you can read about more on our full online review. What we’re talking about today, the Pulse Solo, is the entry level product from the SengLED consumer line, performing stereo from one bulb, whereas the Pulse requires two bulbs, one in left and one in right, for stereo. 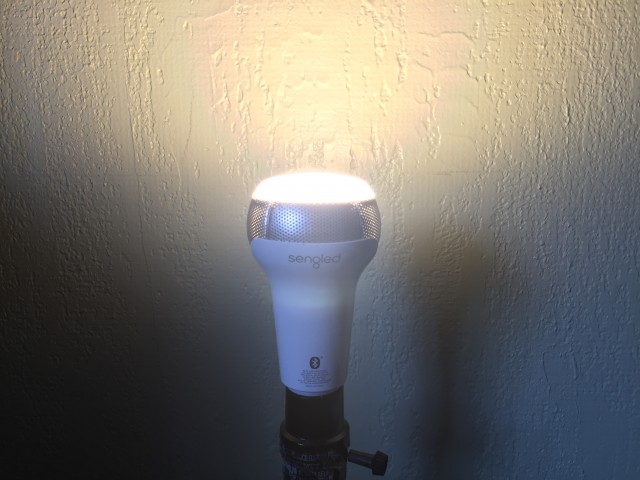 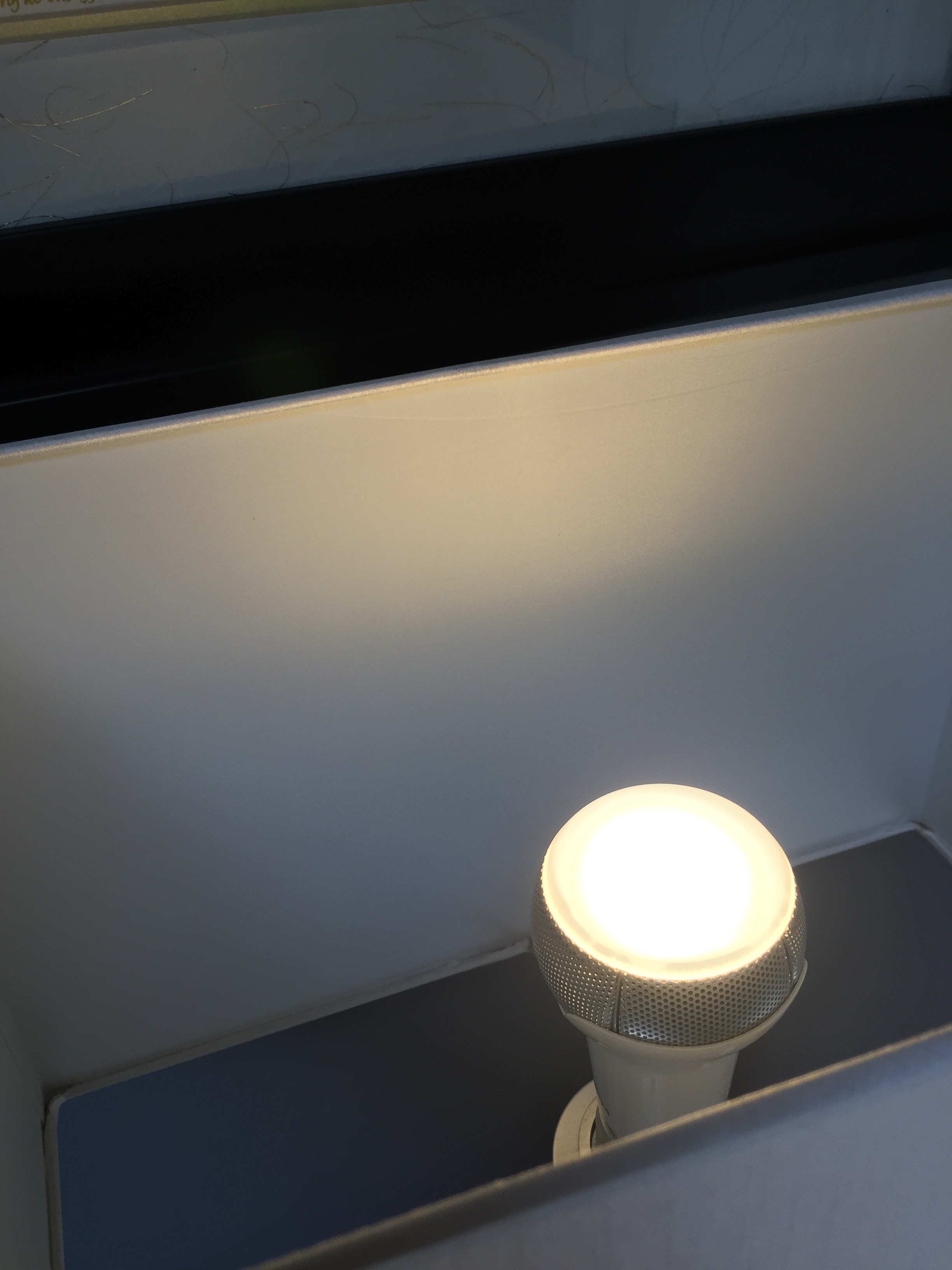 I’ve already gone through some of the basic features of the Pulse Solo, from claimed lumens to frequency response, but I’d like to explore those details a little further. First, let’s talk the bulb itself; brightness, color temperature, energy draw and placement flexibility.

Sengled claims that the Pulse Solo emits 550 lumens which is roughly the same as a 45 watt incandescent bulb but at a fraction of the running cost. This bulb also has full dim controls, however they recommend against running the Pulse Solo through a dimmer circuit as the free app and the circuitry within the bulb will handle all of that.

I found 100% brightness to be great for lighting a small bedroom, home office or craft bench without any need for additional light sources. 80% brightness closely resembles the mood lighting of a fancy restaurant. Lower levels from there tread into the seductive and intimate moods at 30-40% and into late night reading territory with 25% and below. As we dim at levels under 60%, the bulb begins to flicker between brightness changes whereas the transitions between levels above 60% were very smooth. The light remains on at levels as low as 1% but there is no visible difference between 5% and 1%.

2700K is usually the “warmest” LED while LEDs emitting higher color temperatures, such as 5700K and 7000K are “cooler” or much more blue. For example; your everyday energy-sucking 45 watt incandescent bulb, which uses tungsten filaments, emits roughly 2700K which comes off pretty darn orange. You can see this for yourself when you’re driving around at night. Nine out of ten streetlights appear orange, where as newer more modernized parts of town will have lights that appear more white. When we start dimming the Pulse Solo, the color temperature goes down slightly from 2700K and consequently gets a little more orange.