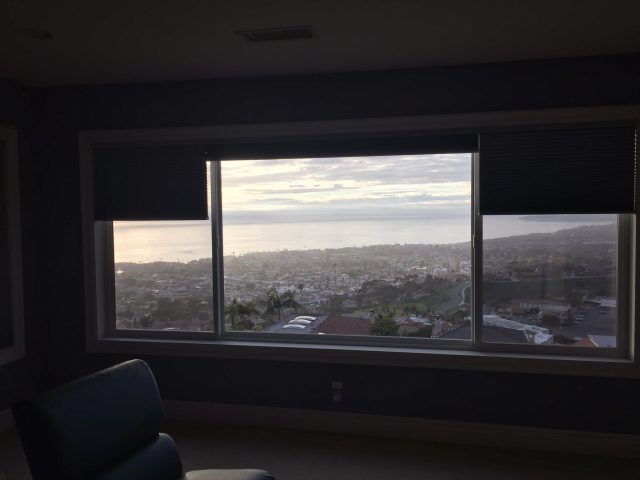 Somfy myLink controls our motorized shades. Somfy isn’t a household name. That’s because they make the motors for many products including motorized shades, curtains, shade screens, and, where I first discovered them – projection screens for home theaters. The motorized shades we have are from 3 Day Mini-Blinds, and have Somfy’s standard RTS motors.  In truth, though, my first Somfy motor was in an expensive motorized Stewart Filmscreen 128” projector screen.

Consider this award to be the equivalent of 4 stars – that is: A solid product, but one that could be further improved

As long as I’m telling a story, when we bought our “dream home” (aka our Smart-Home-to-be) I needed a different screen – that was 6 years ago. I mention it because my newer motorized screen in my theater also has a Somfy motor, and it comes with the same remote control that came with our new set of three 3Day MiniBlinds motorized, pleated window shades (I wasn’t the least bit surprised, of course).

I intentionally went with 3Day Mini-Blinds because it was easy, pricing was reasonable – but especially because I knew they used Somfy motors, so that I could go beyond the basic point-and-click remote control, with two options.  The first of these options is the one I’m writing about/reviewing here, called myLink. 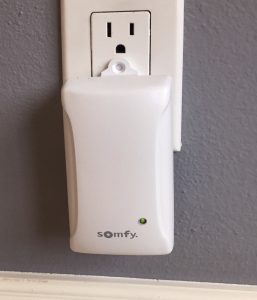 myLink consists of a medium-small controller (4.11” H x 2.23” W x 1.52” D) that you just plug into a nearby outlet (to the shades). And you download from the usual places their  App (iOS and Android available, of course). myLink sells for slightly over $200 online.

Of course, the myLink needs to be within range of your Wifi, and to your shades (or other Somfy devices). Remember, Job 1 for any “new school” home automation – using smartphones, tablets, etc. – is to have bulletproof Wifi covering your whole home.

The Apps talk to the controller via WiFi, of course.  The controller – labeled myLink – then talks to your shades or other Somfy motor controlled devices. 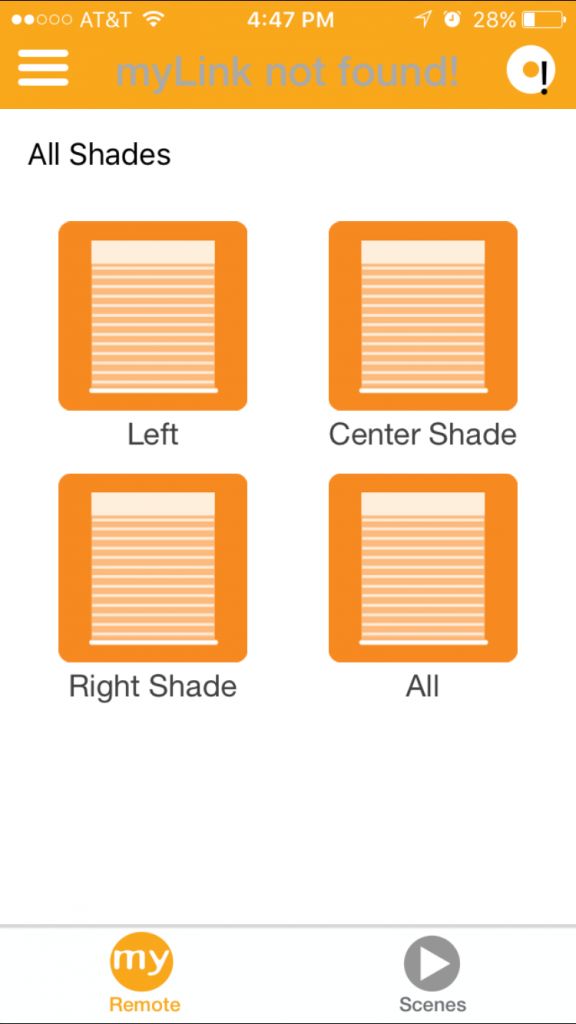 As you can see from the photo, I’ve got three windows (one large, two medium) with the motorized shades, on our view wall. 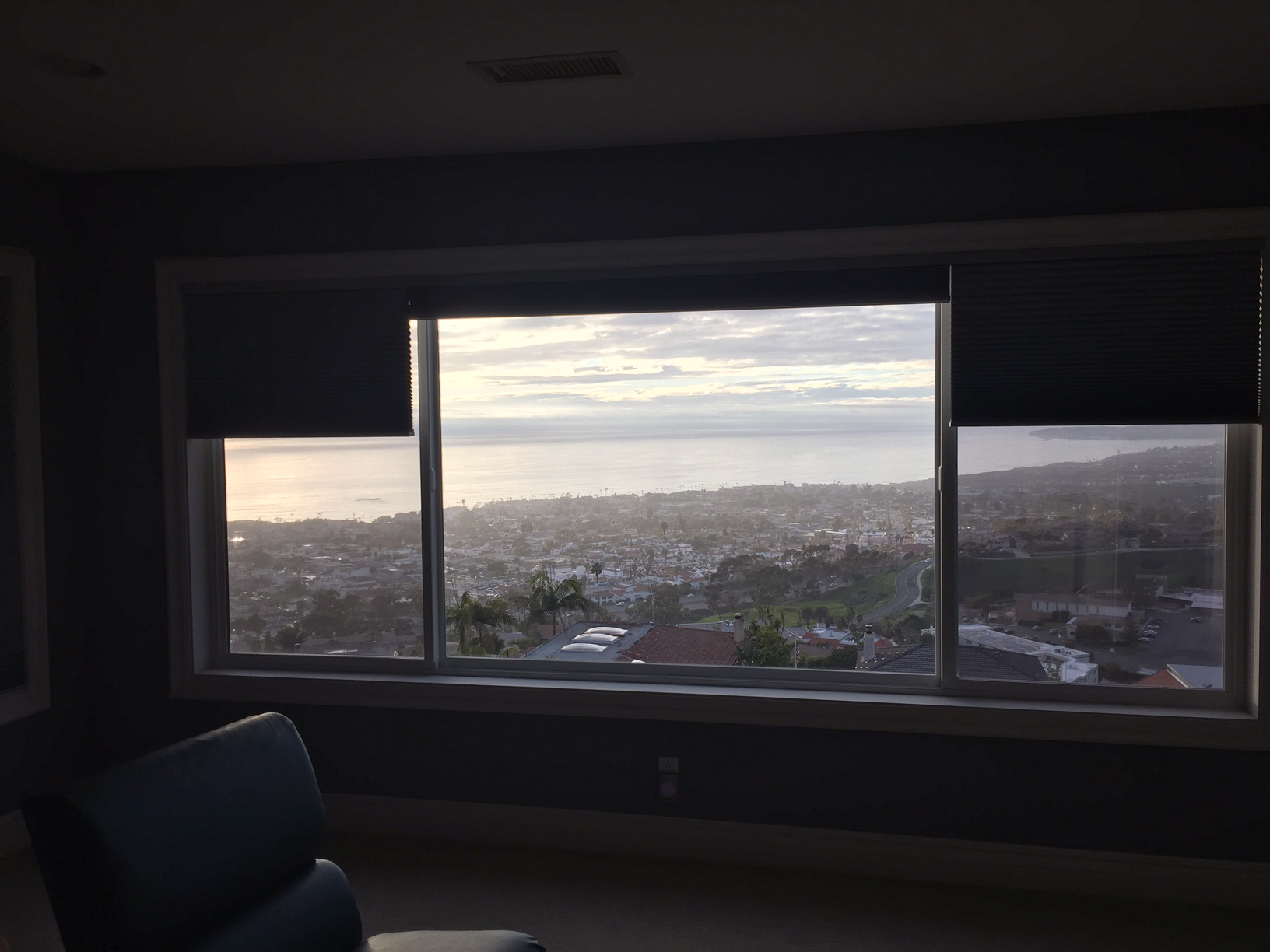 With the basic remote, I could control each separately, with the remote having four positions.  I had set one for each shade, and one to control all three together. In truth, the folks installing the shades actually configured the Somfy remote, but it’s easy enough. With the plain old remote, I can raise, lower, and stop each shade at any point – but that folks, is it.

With the myLink App, and the remote control which is used to setup myLink, I duplicated the remote’s abilities – setting up left shade, right shade and center shade controls, each with an icon I named appropriately if unoriginally (Left…).

To configure the App, you set the remote control to the shade you want to control (the remote was configured when the shades installed). Then, while in the App, put a paperclip in the pinhole, and the shade will do a quick jog up and down.  It will do this again before you finish, but that’s how you can tell the app is talking to the desired shade. 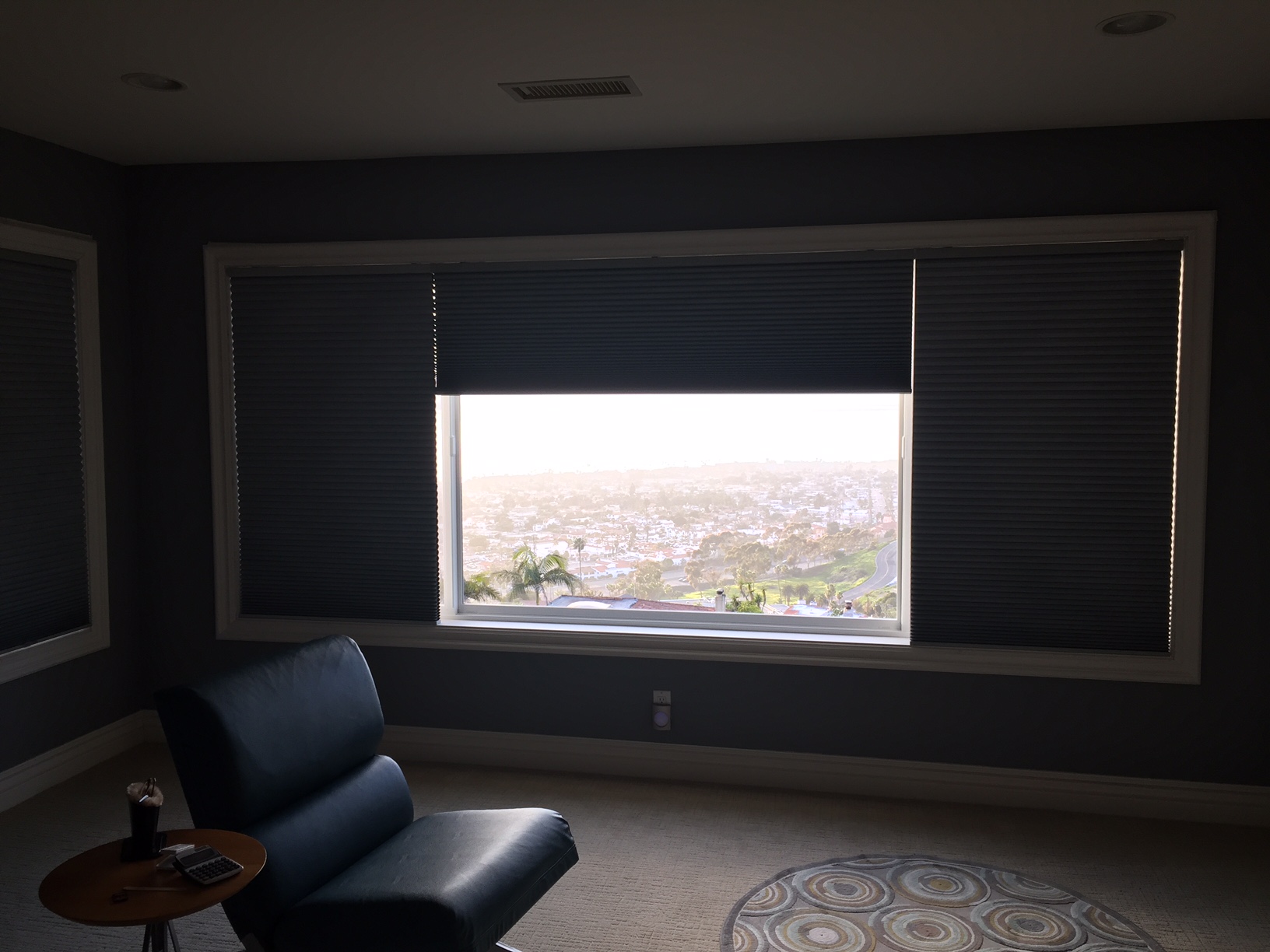 I created a fourth icon designed to control all three shades together. I’m adding a fifth icon that will only control the left and right shades. That way I can easily lower the left and right shades while leaving the larger center window’s shade open.  It creates a different effect in the room, but it’s also a quick way to leave the center shade open in the late afternoon when the sun is pouring in and may be hitting where my wife likes to sit while watching TV or working.

The App, naturally, is more powerful than that old fashioned remote. If I had more than three or four shades, the App is there to support, if necessary, a whole houseful of Somfy motor powered devices.

Before you ask, yes, you can set schedules, but there are limits to what myLink can do. For example, myLink has no way to know you just left the house, so as to lower the shades. That is, myLink is a standalone application.  It does not tie into a whole home system, so that it can work with fancy stuff like Away features, or geo-targeting, or brightness sensors, temperature sensors, etc.

When I originally published this review I reported that there was no way yet to delete an extra schedule or scene, if no longer needed.  That was incorrect.  In either menu, select the pencil to edit, and then swipe to the left, the schedule or scene you no longer want.  That will bring up a big red delete box.  Tap, and voila’ the unwanted scene or schedule is deleted.

Fear not, if you want to integrate your motorized shades, awnings, pergolas, curtains, etc, into a whole smart home control setup, Somfy’s got you covered.  It’s just not this myLink, instead:

I also received Somfy’s other smart interface, called their Z-Wave to RTS controller. Note: RTS is what they call their motors in these shades and other Somfy powered products, that support myLink and their Z-Wave controller.

With that device, I will interface the motorized shades with my current Z-Wave controller (A SmartThings Hub). That will allow it to tie into all kinds of capabilities, such as opening the shades automatically when I get home, or closing the shades when the temperature outside is over 80 degrees, etc.

We will review that controller in a separate review that we’ll tie to this one, but, one thing at a time. 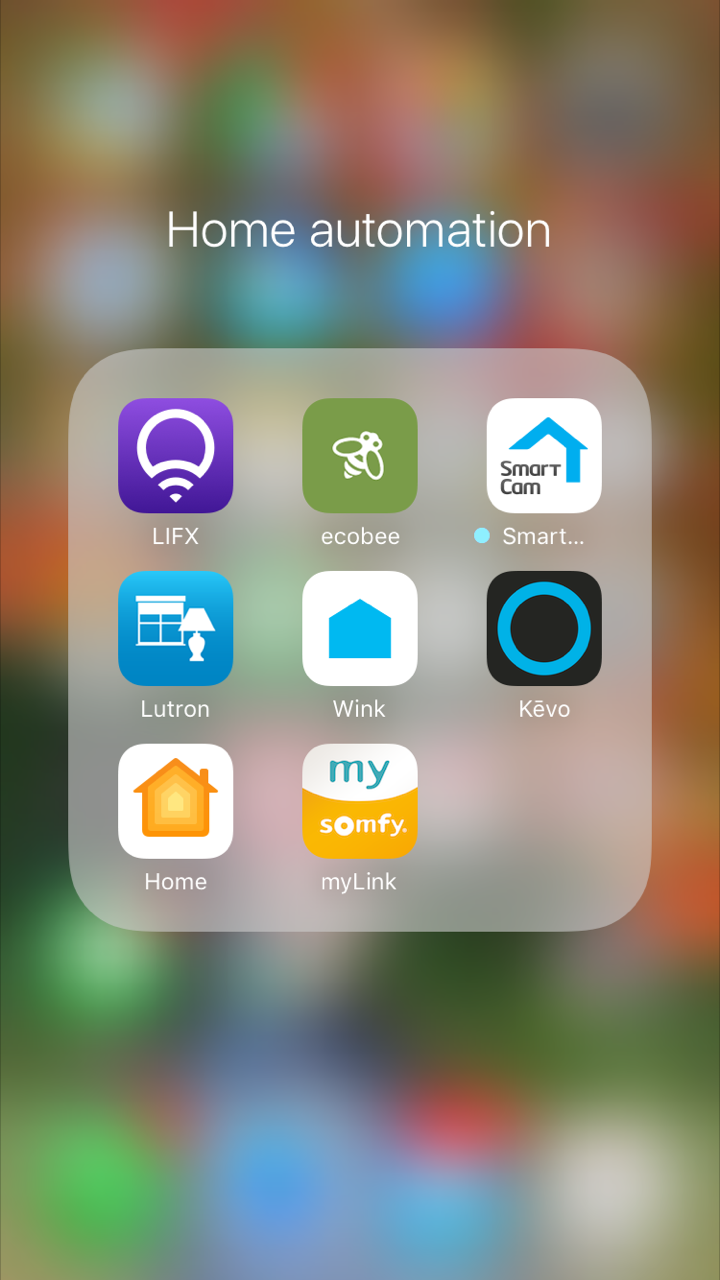 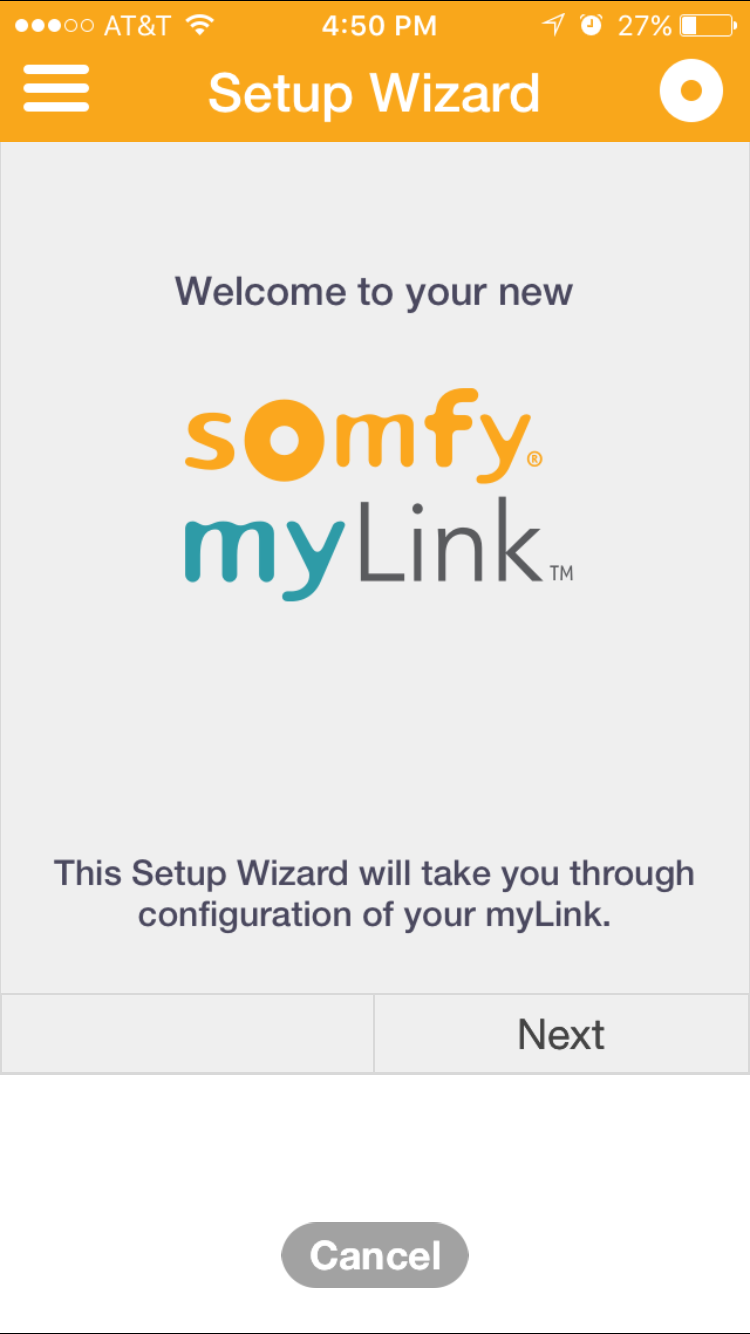 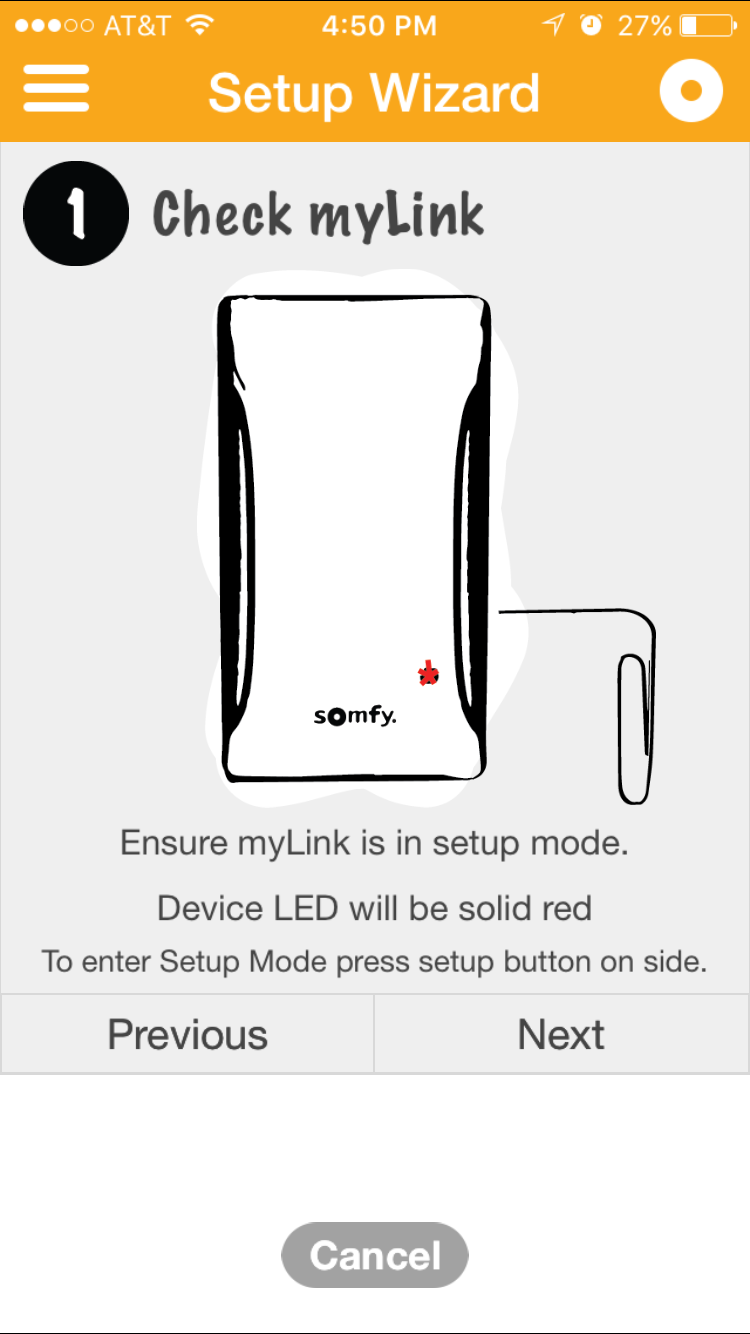 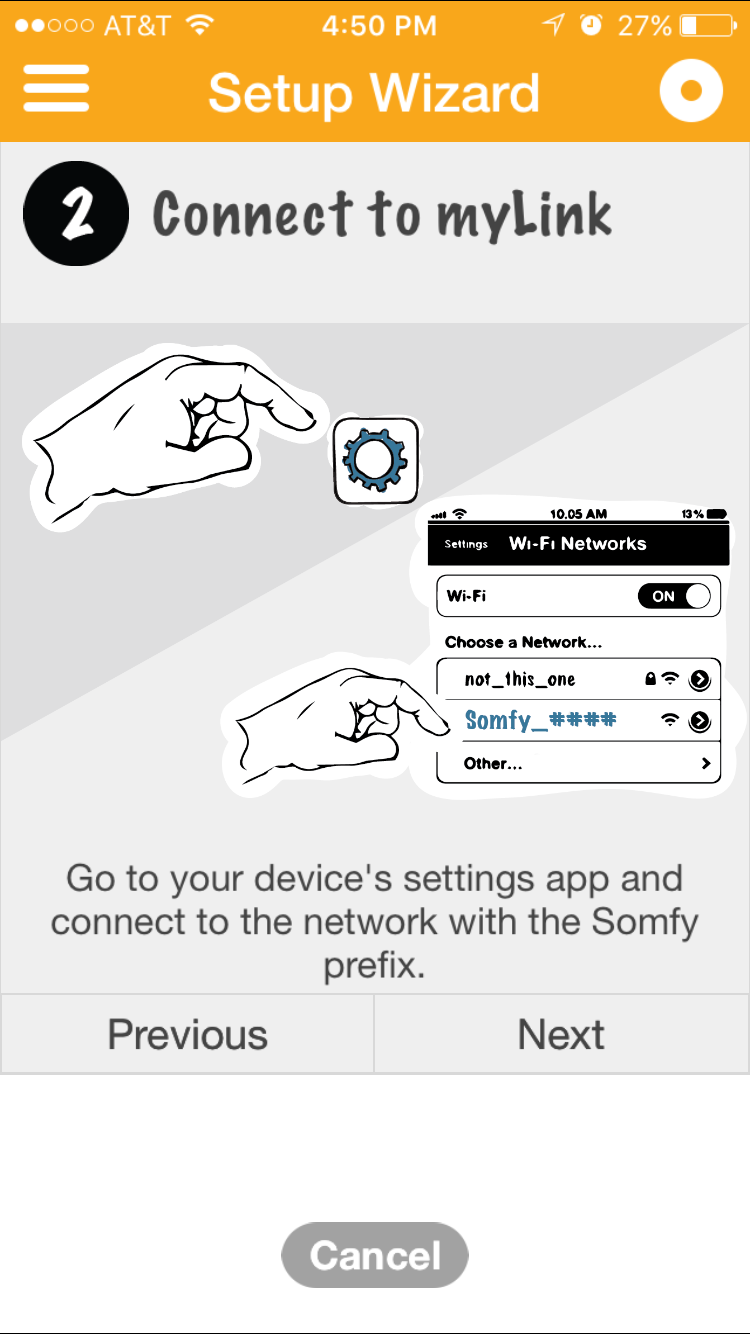 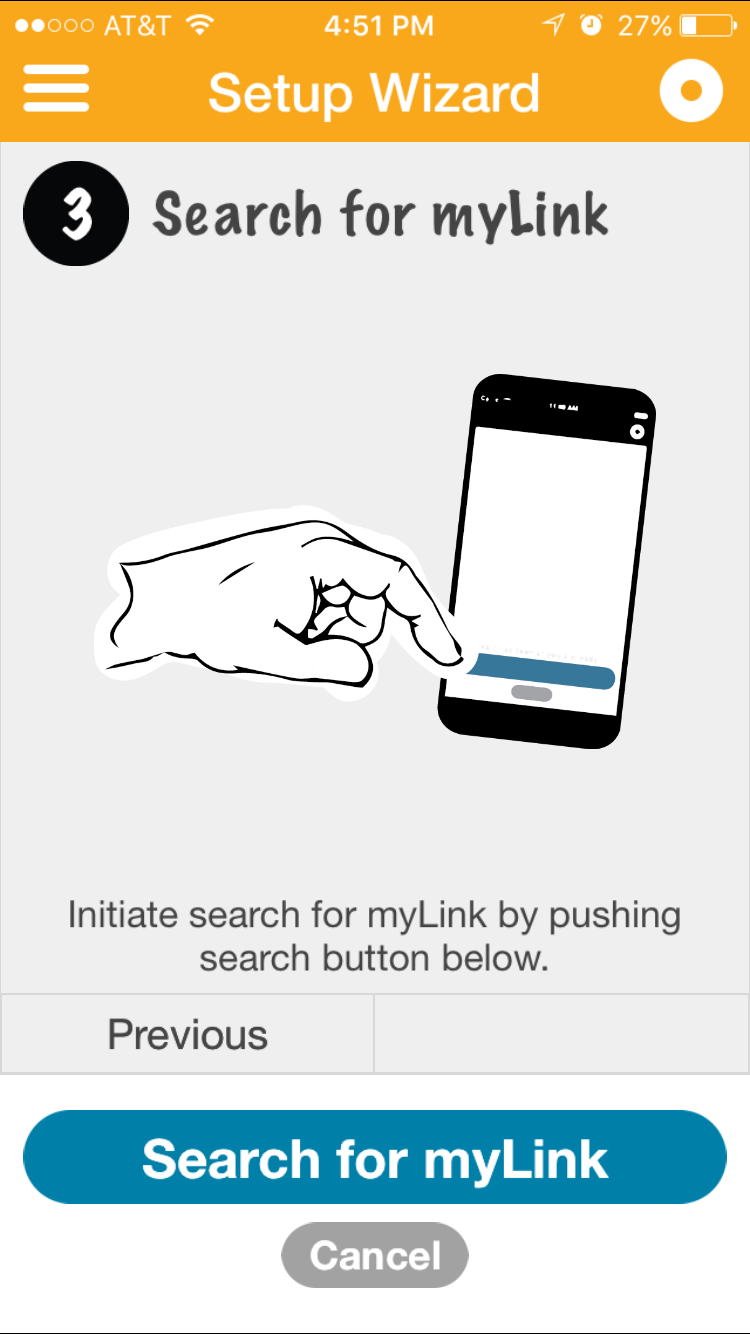 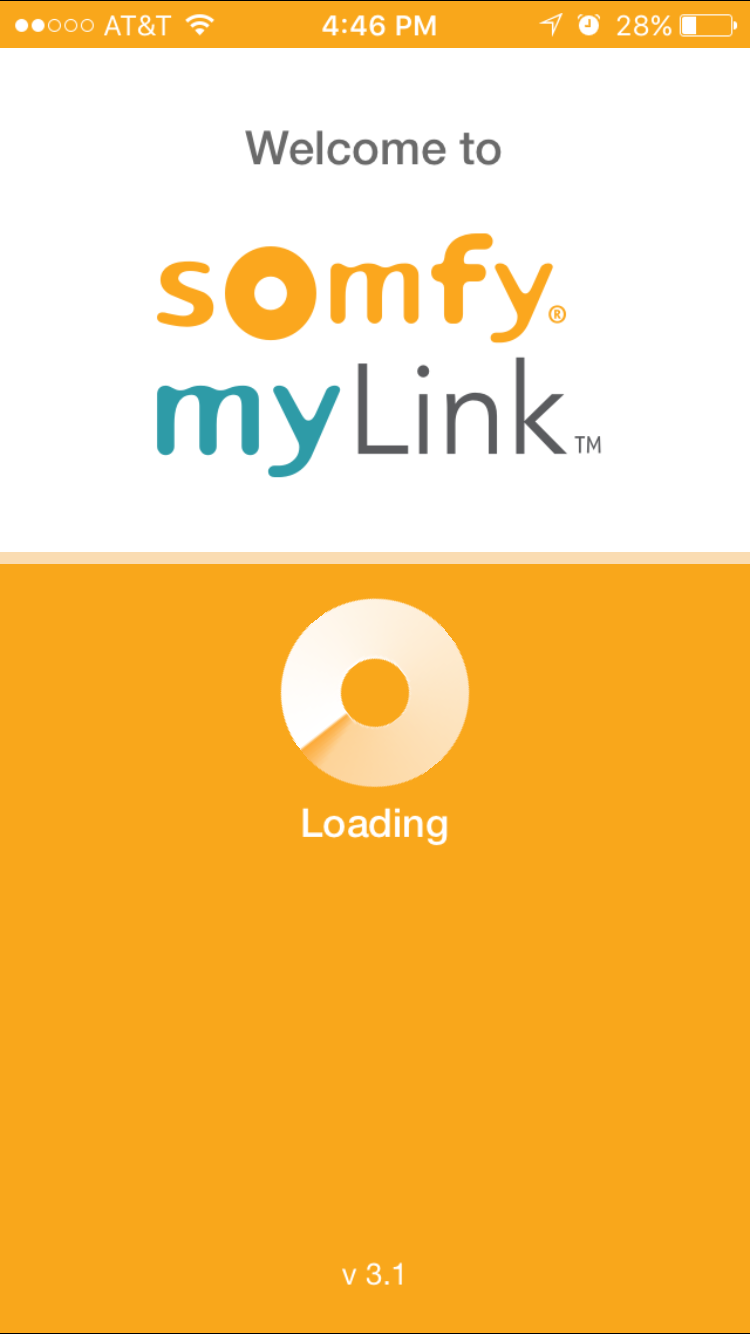 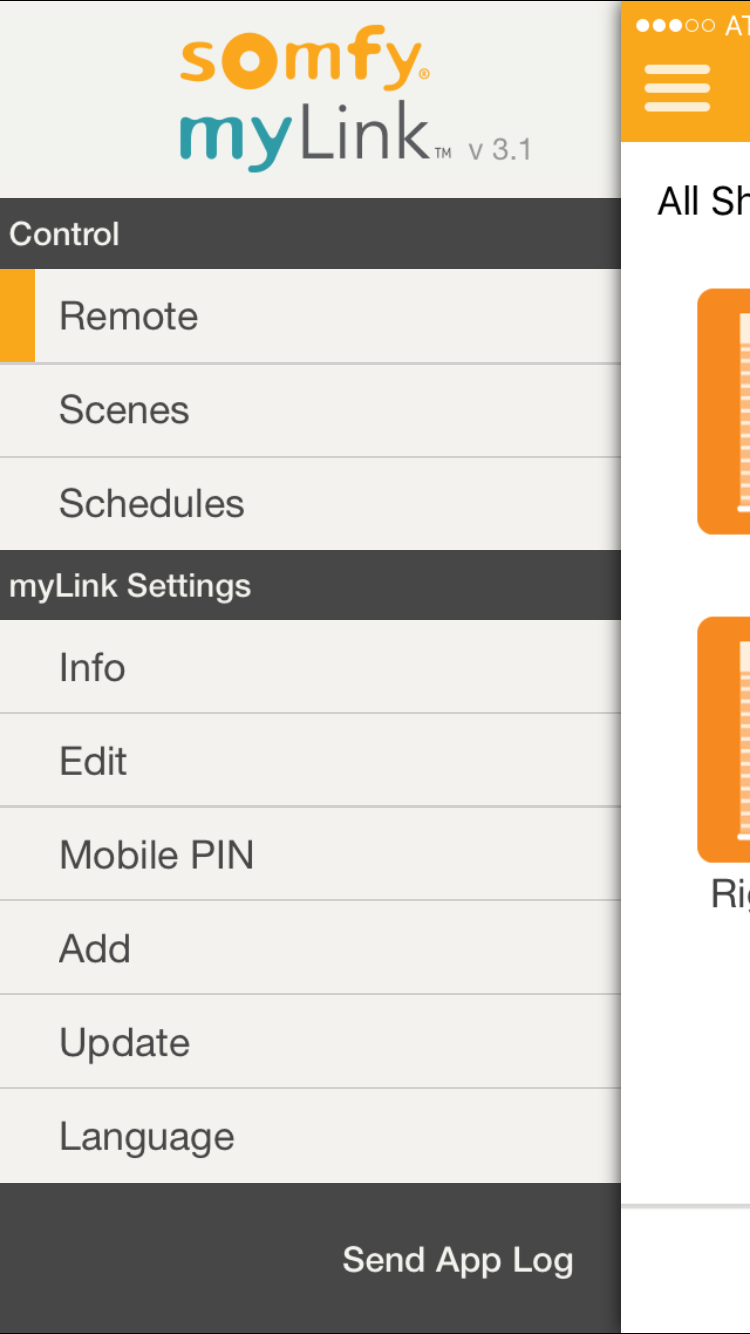 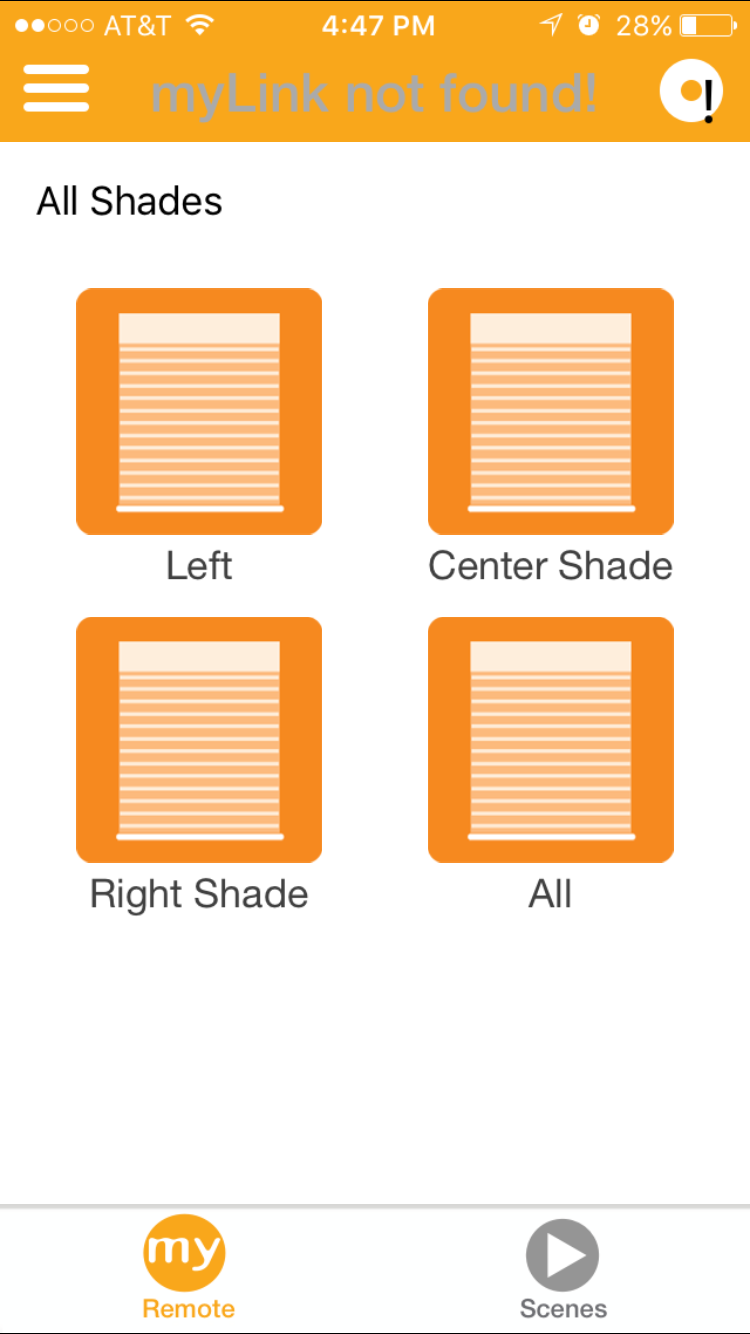 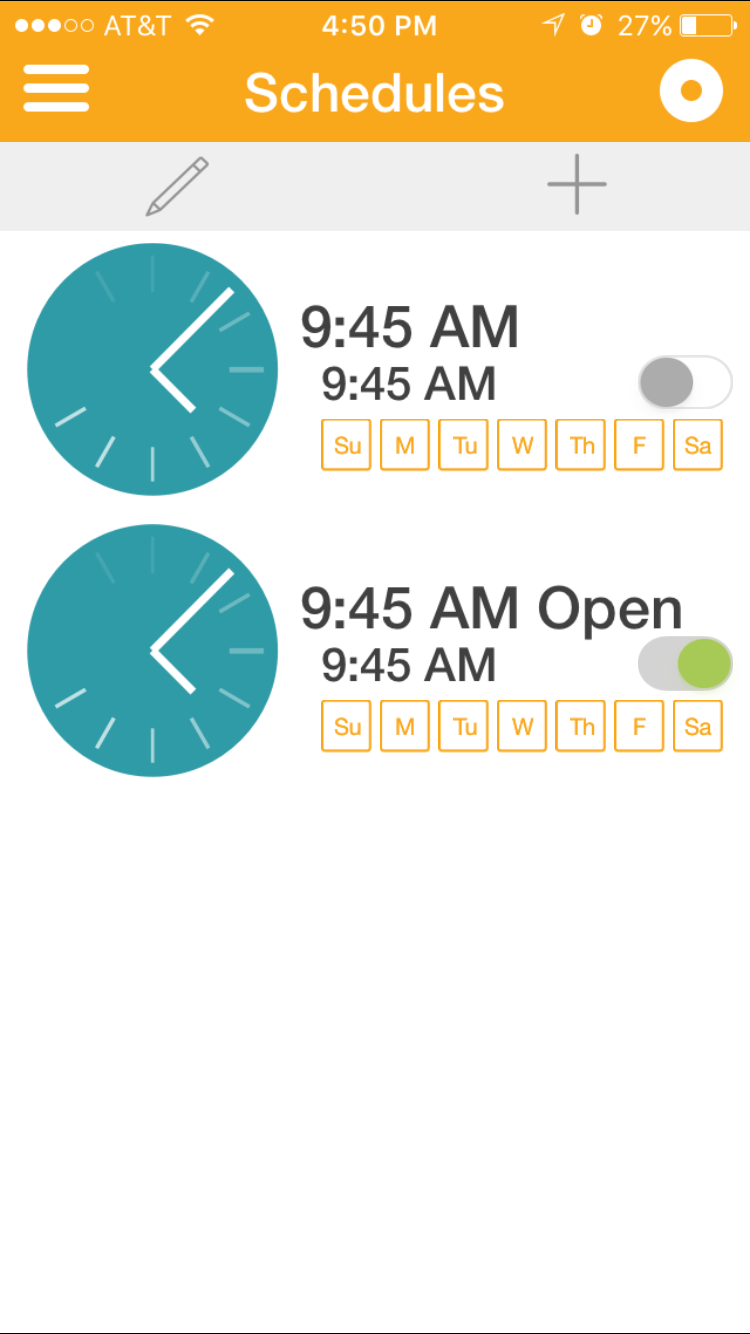 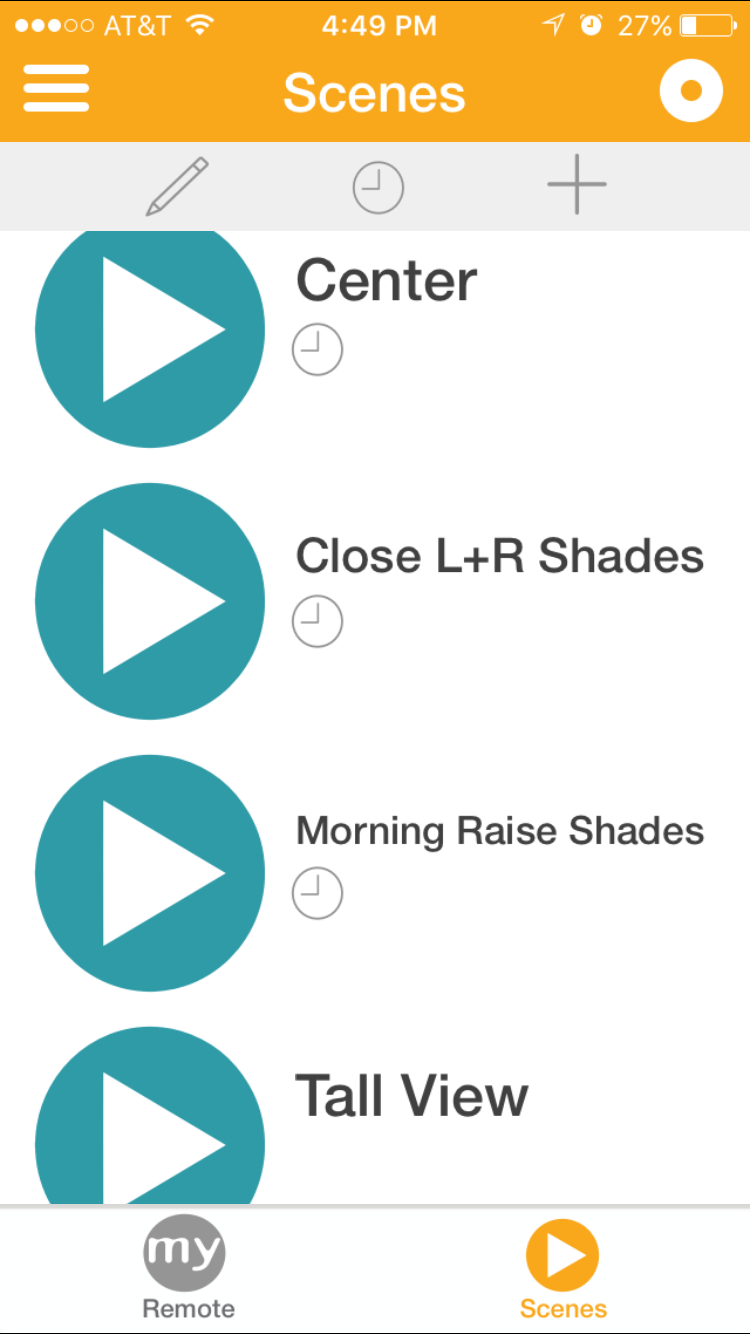 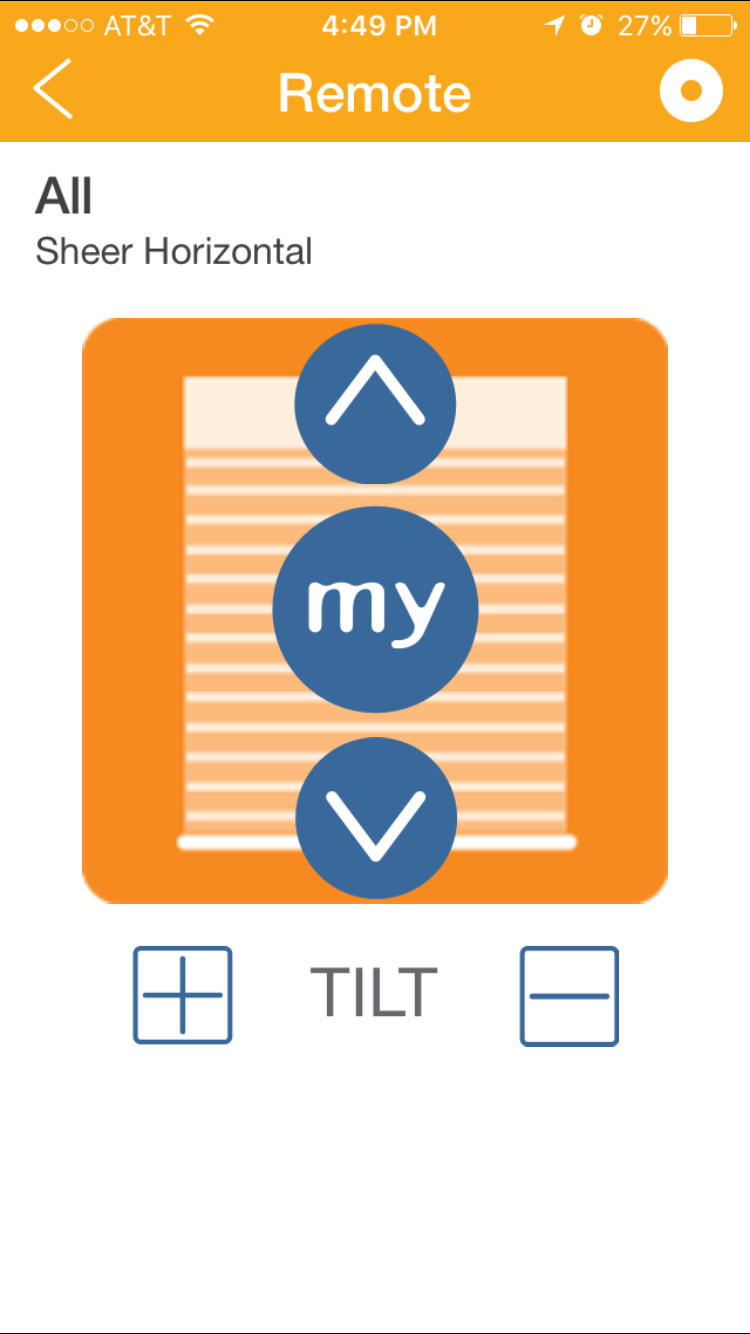 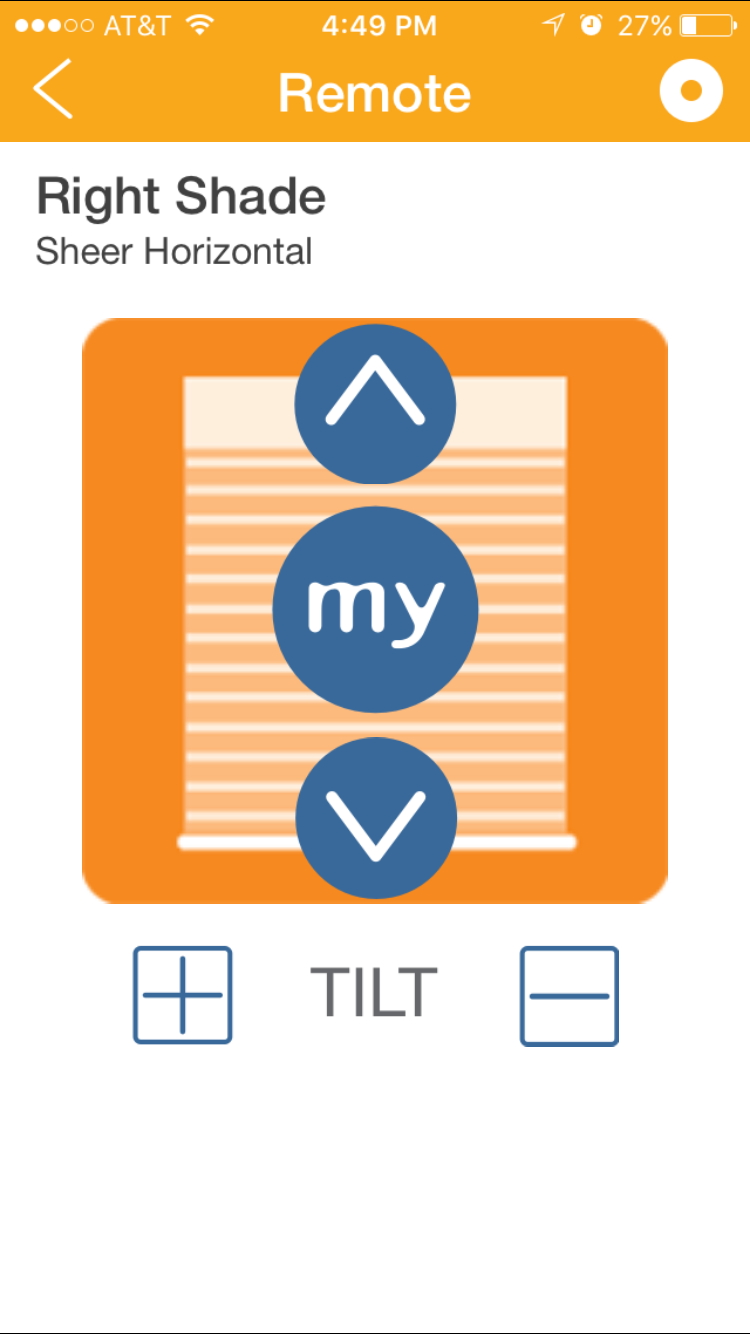 myLink gets the job done once you have it set up the way you want it.  While the App could use some improvement – mostly to prevent clutter, by offering the ability to delete things you no longer want, it is capable.

If I could make one wish for improvement to happen, it wouldn’t be the myLink or its app, it would be for the motorized shades themselves to be quieter. In fairness, in my last home, I had Hunter Douglas motorized shades (also battery powered), and they were just as noisy.

In my conversation with the Somfy folks about myLink, I mentioned that the shades were noisier than I would have liked.  They responded by letting me know, that Somfy makes a very quiet motor system called Somfy Sonesse Ultra 50.  The Somfy folks indicated that the Sonessa Ultra 50s are more expensive, but not dramatically so.   Of note, however, the Sonesse Ultras, unlike the standard RTS motors, will not run on the battery packs like my shades have.  I should mention that the battery packs are behind the shade, and never visible.

If your shades dealer offers motorized shades with the Sonesse Ultra 50 motors, you’ll end up 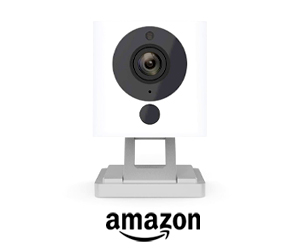 spending a bit more to have an electrician deliver power to the shades, but that cost should be very minor relative to the cost of shades, and installation.

We’re pleased to award Somfy our Pretty Darn Cool award, for a product that works as promised, and is competent, but could be further improved, as we have noted.

We wanted smart motorized shades in our bedroom, for convenience, and Somfy’s myLink accomplishes all the functionality we really considered important.

That’s all folks. Functional, easy set up, and the end result is so convenient, not only compared to non-motorized shades but even motorized shades with a simple remote.

Our review of their Z-Wave to RTS controller is forthcoming. It will allow tying the Somfy shades into a whole Smart Home setup, for even more control.