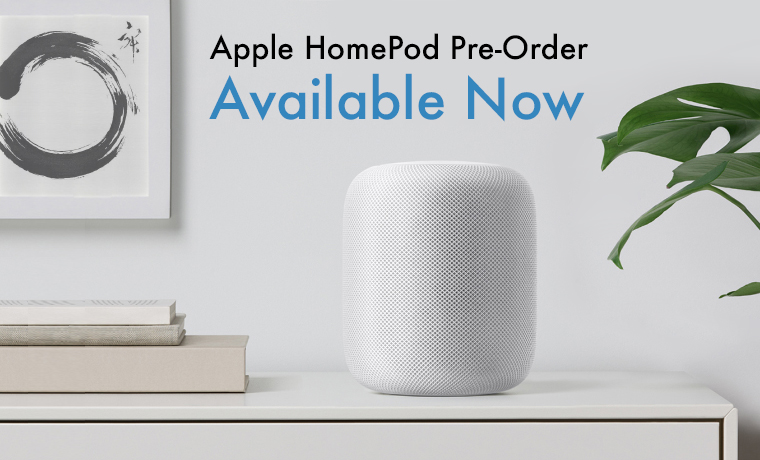 It’s the moment all Apple-lovers have been waiting for – the Apple HomePod has become available for pre-order! The HomePod is Apple’s answer to the Amazon Echo and Alexa-enabled line, and to Google’s smart home assistant, aptly named, Hey Google. The Amazon Echo and Google Home have been battling it out for a while now, with Apple announcing its home solution only six months ago. Since then, Apple fans have been hungry for news about when the device will finally come available, and that, friends, is today.

Previously, Apple users had only Apple HomeKit to control their smart home products, of which there is a limited range. This is due to Apple having higher security protocol for smart home companies to become a part of their network, making HomeKit users safer from cyber attacks via their home automation products. With HomeKit, you had to use Siri from your iPhone, iPad, or Apple computer to control these products, but no more – the Apple HomePod has Siri built in, making one of the best-loved personal assistants accessible in an attractive, capsule-shaped speaker.

The HomePod will be available for pre-order in three countries today, but can be used in other countries as well. Currently, the smart speaker supports those varieties of English (America, British, Australian), but will be adding French and German in the spring (the HomePod will be made available in those countries then as well), along with other languages as time goes on. So, if you’re not in the United States, United Kingdom, or Australia, and still want to order one of these, best contact a friend in one of those countries to order for you and ship it out. If you’ve got the patience, chances are Apple will be shipping to your country sooner than you think.

This Siri-enabled device can do more than just stream Apple Music (though we are stoked about that aspect), allowing users to ask Siri to carry out a whole host of tasks. You can also play your favorite podcasts, listen to news stories, set timers, and – here’s the pinnacle of the product’s abilities – control your HomeKit enabled smart home gear. That means hands-free, phone-free control of your lights, wall switches, and other compatible home automation products. And, of course, what would a smart assistant be without allowing you to check the weather? 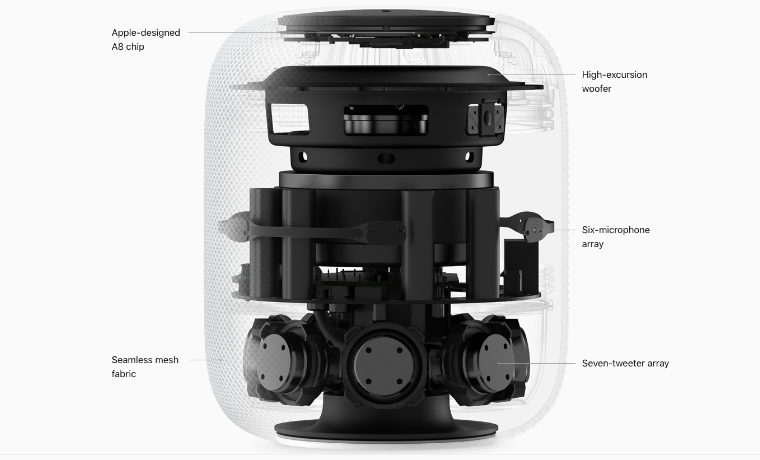 The Apple HomePod has high-fidelity speakers, with a seven-tweeter array and a high-excursion woofer for a robust sound.

That the HomePod is a HiFi speaker (high-fidelity) is extra awesome for us audiophiles, who otherwise would be reluctant to listen to music on our phone speakers or any other sub-par speaker system. With a seven-tweeter array and a high-excursion woofer (for that bass), music lovers do not have to sacrifice excellent audio quality for portability. Of course, the HomePod’s audio technology is Apple Engineered, so you know they did their homework. The HomePod has spatial awareness so that Siri can hear you from anywhere in the room, not just from one direction.

The Apple HomePod is Different from Amazon Echo and Google Home

Apple put a lot more effort into the quality of their speaker system inside the device rather than smart personal assistant capabilities. Instead of positioning it as a direct competitor to the Amazon Echo or Google Home, the Apple HomePod was designed to go up against Sonos – another high-quality smart speaker system. That the HomePod is not positioned as a competitor to the lower priced Amazon Echo ($99) or Google Home ($129) makes sense when you consider it as competition to the Sonos. The Sonos One Bundle goes for the same price – $349 – and is $199 for a single speaker.

As mentioned, it does have some smart capabilities thanks to the integration of Siri, but for Apple, it’s all about the music. Users who do not have Apple Music will have a tough time listening to their tunes via the HomePod, as it does not integrate with Spotify or other streaming services. That could change, but personally, I’d just get Apple Music. I like it much better than I ever liked Spotify and would use it on my Amazon Echo Dot if Alexa would let me, and at only $9.99 a month to access any song I want to listen to – I don’t even notice it hitting my bank account.

Currently, Apple has made the HomePod available for pre-order in three countries – the United States, United Kingdom, and Australia. You can do so now via their online store, and by using the Apple Store app on an iPhone or iPad. The first batch of deliveries will arrive to customers who pre-order on Friday, February 9th – the same date when the product becomes available in stores, only without the undoubtedly obscene line out the door of your local Apple store. The HomePod is available in two colors – Space Grey and White – and are priced differently depending on the country you’re ordering from: $349 in the US, £319 in the UK, and $499 in Australia.

Of course, you can also pre-order from other authorized dealers: