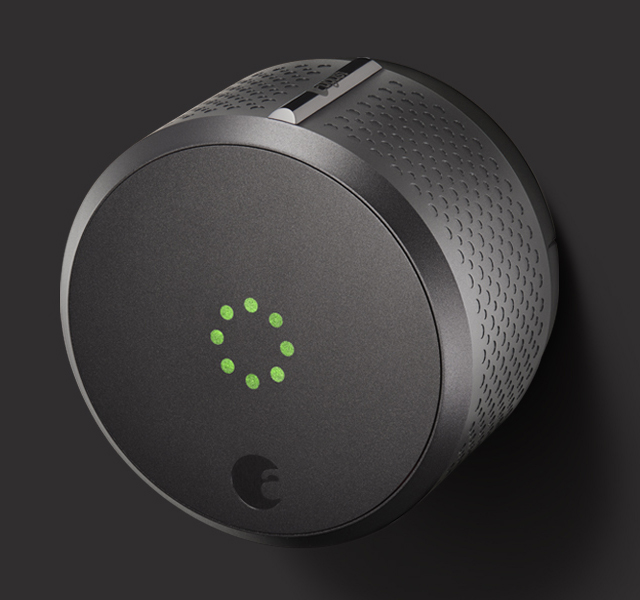 August Home, a premium smart lock manufacturer, has just released the newest August Smart Lock – the August Smart Lock Pro. This lock is Z-Wave compatible and is geared toward the professional market rather than do-it-yourselfers. The development of the August Smart Lock Pro has prompted the company to join the Z-Wave Alliance, making them a part of a global membership that works to expand the use of Z-Wave protocol in smart homes. Additionally, August Home is looking to join the Zigbee Alliance and other home automation standards’ organizations in the interest of serving the professional market further.

The August Smart Lock puts a cool twist on the smart lock – their locks work with existing deadbolts. Instead of replacing the entire hardware, the August Smart Lock fits over the deadbolt on the inside of the house, replacing the knob you normally turn on a deadbolt to lock and unlock it. Consumers can use their old key if they want, or use a virtual key via their smartphone, where they can also set schedules for e-keys that they issue to their friends and family. Also worth noting is that the lock comes with an auto-lock/unlock feature. When you come home or are leaving the house, the door will automatically lock or unlock depending on the appropriate action. Pretty cool for those forgetful types.

As an added bonus, the August Smart Lock Pro is compatible with Apple HomeKit. Many locks do not work with personal assistants because of the security implications. Say Amazon Echo could unlock your door. Someone standing on your front porch, within “earshot” of Alexa, would be able to open your door – whether you want them to or not. However, as Siri lives in your pocket, this feature is as safe and convenient as asking her to play your favorite song.

The August Smart Lock Pro (Z-Wave) is scheduled to begin shipping Fall of 2017, with plans to be distributed from August partners such as AVAD, ADI, Worthington and Top Notch. You can obtain more information about August Pro at august.com/pro.

The August Smart Home Access Solution is composed of three top products offered by August Home. The August Smart Lock, August Smart Keypad and August Doorbell Cam is a home automation solution that allows users access to their front door from anywhere. Using a smartphone as their key, consumers can enter and lock the door and issue virtual keys to family, friends, pet sitters, repair men, or anyone else they wish to grant access to their home. The app also allows one to track who enters and exits the home, and at what time.

The August Smart Keypad allows users to program entry codes that are unique to each friend, family member, or service provider. This particular product allows people to lock and unlock the door, even if they don’t have a smartphone. The August Doorbell Cam is a pretty nifty buy as well, as it allows consumers to virtually see and speak to visitors who are at the door via a smartphone. You could be halfway across the world and still “answer” your door.

Check out our other articles on August Home products:

August Home Launches Amazon Alexa Skill for Smart Door Locks
This article speaks to the new Amazon Echo skill for their August Smart Lock. How can Alexa service you with your smart lock? Find out the details in this featured article.

This article focuses on the new August Smart Lock Mortise Kit – who’s it for, what does it do, and how much does it cost? These are the questions answered over the span of this article.