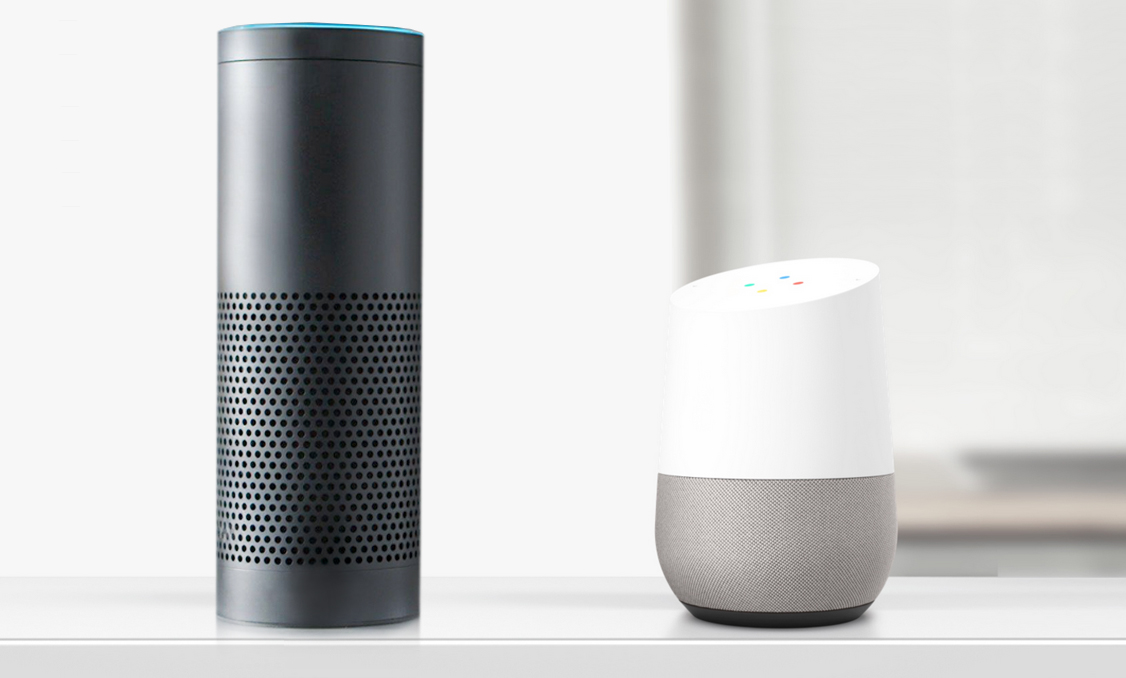 In what is possibly the most significant technological race since that between the United States and Russia during the Cold War, Amazon, Apple, Google, Microsoft, and others are competing to create the most advanced “AI” in existence – or at least the most advanced one available to consumers in the form of personal assistants. Within the next ten years, we can expect drastic improvements in the realm of personal assistants, with the end goal being an AI with the intellectual prowess and aptitudes of Jarvis. (We’re not promising Jarvis level in ten years, but you never know!)

These top names in the game seem to be purchasing just about every noteworthy artificial intelligence company on the planet. It almost seems like they are scooping them up faster than new ones form. Apple, Amazon, Microsoft and now Google are competing directly to best the others in providing consumers with the most innovative and progressive personal assistant, one that will perhaps exceed even our wildest dreams (but not Iron Man’s.)

In November 2016 the Google Home launched to take on Amazon Echo and Apple Siri in the ring of smart personal assistants. Microsoft’s Cortana is also out there, but doesn’t get “the respect,” nor does it have the reach, of the others.

The Home is Google’s direct response to Amazon’s Echo and Dot, offering similar capabilities to those devices, falling short in some areas, exceeding in others. With frequent updates and additions to these PAs, you, as the consumer, need to understand that it’s not a question of who makes the best personal assistant today, but which personal assistant best fits your needs.

Who will rule your roost – Amazon Echo or Google Home? In the first of two articles, we have outlined some of the more remarkable areas of each product’s capabilities in the spirit of providing you with the knowledge you need to make an informed decision. This article speaks on the areas in which the Echo and the Home measure up in terms of knowledge and personal assisting. We’ll save comparisons with Siri for another time.

Finding, Sharing Knowledge - One Aspect of a Personal Assistant

The mark of a really great AI, aka Personal Assistant, lies in its ability to interact with the user on a level that reaches near-human behavior, with a knowledge base that equals or surpasses that of an educated man or woman. Ever heard of the Turing test?  Both the Amazon Echo and Google Home possess impressive personal assistants, with the Home marginally besting Amazon’s Alexa in terms of knowledge and natural conversation at this moment in time.

Ask Alexa anything in a format that “she” understands (and not too complex a question),  and “nine times out of ten” (okay, maybe 5 times out of 10, but she will keep improving) she will provide you with a satisfying answer. On some topics, she cannot give you a decent response, telling you she does not know the answer and leaving it at that, while the Google Home puts in slightly more effort to satisfy your query. However, Alexa has some incredible assets that, at the moment, surpass Google Home’s capabilities – though probably not for long. Expect all these Personal Assistants to be leapfrogging each other in how well they do at various tasks, as the weeks, months, and years go by. Today’s best at being a conversationalist, might be the worst 6 months from now, or a year from now as each company continues to significantly enhance their PA’s skills.

Both, PA’s will, for example, quote from Wikipedia.

Let’s consider an example or two of what is possible:

Alexa’s “Skills” are perhaps the most ingenious additions to the Amazon Echo, and in relation to personal assistants at this time. Gamers rejoice – there is a Skill to turn Alexa into your personal gaming sidekick. With another, Alexa can be utilized as a tuner or metronome. Budding mixologists can learn complex recipes for cocktails, and the list goes on. These “Skills” are downloadable software patches that come in all flavors, from jokes to instruction in various areas of interest.

Lovers of the culinary arts will also benefit by using Amazon Echo, as Alexa can be your own personal Su Chef. Through Alexa, you can gain access to a personal cookbook with a multitude of recipes, and she will give you step-by-step instructions. She’ll even email you the full recipe for you to refer back to while cooking if that’s what you prefer. These are just a few of many Skills available, and Amazon Echo’s abilities continue to evolve every week, especially as 3rd parties become more involved.

Worthy of note: Even while writing this article, the Echo has improved. When I first began writing, Alexa could not carry on a conversation, just single responses. Previously, when asking Alexa what movies Robert Downey Jr. has been in, she would provide a short list and direct you to the app if you wished to know more. When asked the follow-up question, “How old is he?” she did not know what I was talking about, as I did not repeat Robert Downey Jr’s name again. Now, Alexa gives a response to the second question: “Robert Downey Jr. is 51 years old.” We are not sure how recently Alexa learned to do this, but essentially, Amazon Echo now touts a capability, that from the initial marketing of Google Home last month sounded like a feature only Google could perform. This is how it will be. No doubt pretty much every ability each of them has today in terms of “AI”, the others will almost certainly have added. The question becomes, how many new capabilities have been added.

You can expect Google Home to perhaps have more knowledge at its fingertips, as it has access to Google’s servers to find the answers which best fit your inquiry. You can ask Home anything and everything you’d normally type into Google Search, using natural language in the way you normally speak. Google’s Knowledge Graph, the method by which the Google Home retrieves information, is designed to provide you with a direct answer to your query.

Should Google be unable to answer your question, it will attempt to provide a satisfying answer from trusted sites such as Wikipedia. Like the Amazon Echo, Google Home remembers what you’ve just asked in order to accurately, and naturally, respond to your follow-up. Both products (and the others out there like Siri and Cortana) are constantly progressing and you can expect exciting changes to come to the Home and Echo in 2017. In three or four years, though, the advances should prove startling.

Amazon, like Apple, has opted to humanize their personal assistant by giving her a name. Admittedly, “Alexa” rolls off the tongue with ease, but Google’s trigger phrase, “Okay, Google,” has a certain sense of power to it. And many of us have long been “Googling,” as the way we describe searching. That said, those of us who have been on the web long before Google appeared, are more likely to say “I’m going to search” instead of “I’m going to Google something.” From an emotional standpoint, saying Hey Google may make some feel like they alone command the internet titan, Google. On the other hand, calling Alexa – (or Siri) by comparison feels personal and aptly appropriate for such an “advanced” AI.

Alexa has about 900+ Skills that make her an excellent personal assistant. She can tell you the time, flip a coin, and order you a pizza. She can set alarms and add items to your online Amazon Prime shopping list, in addition to that cookbook Skill, which is a dream come true for the chef of the house. Ask Alexa what is on your calendar and make a to do list. You can ask about the weather, request an Uber ride, flip a coin, have her read your Kindle books aloud to you, find a restaurant, tell you the news – even pay your credit card bill. The variety alone is enough to tickle anyone’s fancy.

Google Home will be adding more of these features in days to come. Google is launching an “open developer platform” in December of 2016, which will allow for more expansion in terms of the Home’s personal assisting capabilities. For now, the device can perform much in the same way you experience with the Echo. You can ask for news, sports scores, and request an Uber ride as well. The Home can push your reminders and notes to the Assistant on Google’s Pixel smart phone. New Android phones will work with this feature too, in the near future.

Perhaps the most notable feature of the Google Home’s is “My Day.” This feature uses everything Google knows about you to give you a daily update. The Google Home will brief you on everything you might want to know in order to start your day from the weather to your calendar appointments and the traffic of your commute. Home is integrated with Google Maps, a feature that makes the Google Home as useful for traffic updates as your smart phone. You can find out how long it will take you to get anywhere you want with a simple “Okay, Google.”

A second article continuing this discussion of Amazon and Google Personal Assistants will be published on 12/27.