Smart lighting is a popular choice for many homes, but how about artistic smart lighting? Nanoleaf Aurora is possibly the most innovative and impressive way to bring smart lighting into your home. Triangular frosted panels mount to the wall in customizable patterns. I’ve seen Aurora designs in zigzag patterns to geometrical shapes, all are eye-catching, and all add a sleek, modern look bordering on science fiction. Nanoleaf Aurora blends the smart lighting technology we all know and love with art, making these smart lights a gorgeous aesthetic addition to the smart home.

Nanoleaf Aurora invites you to use smart lighting as more than just a light source with their presets. The app has a whole host of settings from happy, relaxed, and frisky, to productive – all with varying degrees of color temperature to inspire these moods. Like other smart lights, you can automate your lighting throughout the day to influence your mood and energy levels. You can set the tone to look like the sunrise or sunset, and customize color palettes to your tastes. Nanoleaf Aurora allows you to create an interactive piece of art with a functional payoff.

Nine 100 lumen, interlocking triangular LED lights make up the Nanoleaf Aurora starter kit. The kit also comes with a remote control, mounting strips and stencils that allow for easy mounting to any wall. One can purchase extension kits that come with three panels, and each starter kit can handle up to 30 of these lights in its network before you need to buy another. The Nanoleaf Aurora’s panels have a color temperature range between 1200K and 6500K. Its RGB+W lights are responsive to music, natural light and your voice via the app. 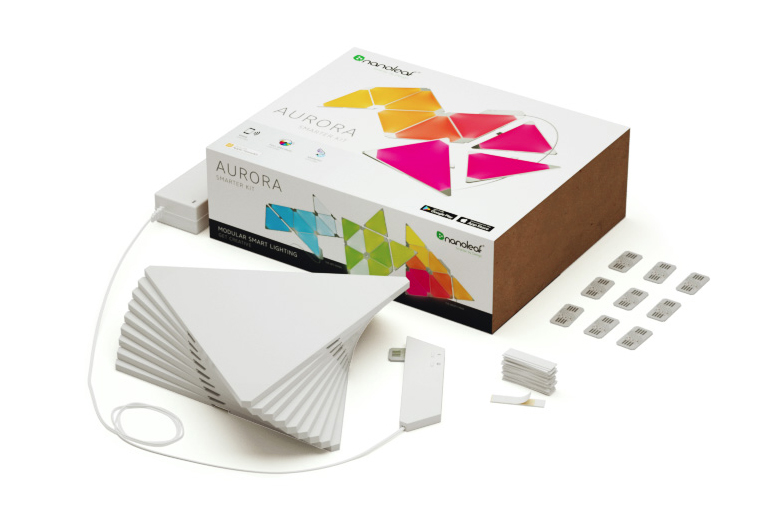 Compatibility With The Smart Home 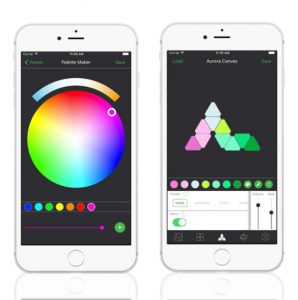 Nanoleaf Aurora works with HomeKit, enabling Siri Voice Control. The simple command, “Siri, set my Aurora to blue,” changes your lights to the desired hue without having to physically open the app. Soon, the Aurora will be compatible with other smart personal assistants, such as Amazon’s Alexa, and will work with IFTTT and DMX Wireless Control as well.

Nanoleaf Aurora is compatible with both iOS and Android devices, boasting that if you have a lighting desire, they’ve got an app for that. The lights require iOS8 to the current iOS, and Android 5.01 or higher. Basic functions do work with HomeKit, but if you want the real deal in customization, you’ve got to use the Nanoleaf app. All of Nanoleaf’s Smarter Series product line can be controlled via the app.

You’re not out of luck if you don’t want to use a smartphone, however, as basic operations of the Aurora can be controlled with the physical remote. One button to load, and one button for selecting a preloaded or saved Scene. The Nanoleaf Aurora uses Wi-Fi to communicate with the app, which has a much longer range than Bluetooth. Using your smartphone, you can transform lighting Scenes from the other room, upstairs, or even Starbucks – if so desire.

So far, Nanoleaf has neglected to send us an Aurora to review, though we really want to and have asked very nicely. Basically, if you want to review the product, you have to buy it. Alas, we will keep trying. We are determined to review the Nanoleaf Aurora, and an unwavering desire is 90 percent of the battle.

The Nanoleaf Aurora can be found at the Nanoleaf website, at Best Buys in the United States and Canada, and the MoMa Design Store. At MoMa, the starter kit goes for $200 ($180 for members), with the expansion packs falling in at $60 ($54 for members). Best Buy has similar pricing at $199.99 for the starter kit.