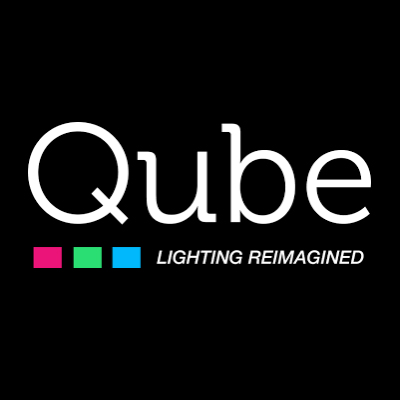 The Qube Smart Bulb and Qube Smart Light Strip with Bluetooth and Wi-Fi have arrived to make smart home lighting more cost-effective. These color lights may have been “just another smart light” to add to the list of existing ones, if not for the significantly lower price Qube offers compared to similar products. Smart bulbs generally go for upwards of $50 or more, while lighting strips can be found for up to $30 a meter – Qube offers their bulb for $29 ($24 on their site as a pre-launch special), and people can pre-order the smart strip starter kit for $24 on Indigogo. Let’s see what the Qube Smart Bulb and Qube Smart Light Strip have to offer us.

The Qube Smart Bulb has some interesting features, but just the much lower price than any of the recognized name competition should be more than enough to get everyone’s attention.

We have been in touch with Qube, and they have promised a unit (hopefully two), once full volume shipments begin in March, so that we can offer a full product review of the smart lights.

We have received multiple complaints that folks that signed up for the crowd sourcing, of this product, have not received their lights.  I reached out to Qube’s PR firm, who said they were no longer handling the account.  They said they would try to get me a contact at Qube, but apparently were not able to do so.

It is hard to say, therefore, whether Qube is a viable company at this time.  I do know that originally they were going to be late on Apple HomeKit compatible bulbs, as one of the people said that, but it’s been now, a couple more months, with no return contact.  Let the buyer beware!  – Art

The Qube Smart Bulb is a smart colored light that uses Bluetooth Low Energy to connect your bulb to your smartphone or smart Bluetooth-emitting wearables (such as the Apple Watch, Fitbit and Jawbone) to determine where you are in the home with great accuracy, tracking your location to the very room you stand in. This feature is called Qube Sense, and it can be used to customize your lighting when you enter the room. With 16 million colors, you’re sure to find a hue that complements your décor and your lifestyle. The bulb is easy to install, with three simple steps: screw the bulb into the socket, download the app and connect to the network. 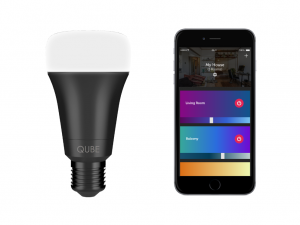 A 1,000 lumen LED bulb, the Qube Smart Bulb can last up to 22 years, or 50,000 hours. The flexibility in color added to the money-saving qualities of LED lights make this bulb a good choice for those who are interested in lowering their carbon footprint and saving on the electricity bill in the process. The Qube Smart Bulb connects to your home router as well, which means controlling your lights from outside of the house is a done deal. You can turn them on or off from a few towns over, another state – even halfway around the world, provided you’re connected to Wi-Fi or your phone’s internet. The use of Wi-Fi in conjunction with Bluetooth extends the range, making this bulb and its smart strip brother more reliable in their connectivity.

One of the coolest aspects of smart lighting is the smart light strip, such as the Qube Smart Light Strip. You can customize the look of your home, stringing the strips along the underside of your kitchen cabinets and lining the inside to give a really cool aesthetic to the room. These particular light strips are 1,600 lumens and are an affordable option for decking out a whole room, as the starter kit costs a mere $24, with the extensions costing less than that. 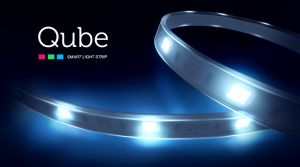 Each strip is a meter long, and depending on the size of your kitchen, you could get away with spending only $100-250 to customize the look. Qube’s aim is to provide an affordable lighting solution to all who want smart lights in their homes. Another plug-and-play product by Qube, the light strips adhere to wherever you place them and plug into any regular wall socket. Like the Qube Smart Bulb, the Qube Smart Light Strip uses Bluetooth Low Energy to operate, with no need for a hub. Both products are connected to the cloud, allowing you to access your lighting from anywhere.

In addition to the previously mentioned Qube Sense, the Qube’s free app (compatible with iOS, Watch iOS and Android operating systems) has a host of other cool features to control your lighting solution. Get notified when you receive a message or phone call with the Qube Notifications feature, which also works with IFTTT, third party apps and other devices to create automation commands.

Qube Moods allows you to choose from presets, such as Party, Sunset, or Reading moods, or customize your own. A nice feature for both the Qube Smart Bulb and Qube Smart Light Strip, called Qube Schedules, is being able to sync your lights to your alarm and have them imitate the light produced by the rising sun. You can also schedule your lights to turn on or off at a specific time with this feature. As mentioned before, you can turn your lights off or on from anywhere – this feature is called Qube Remote, and connects to your home router to allow you access at any time. Like other smart lights, both the Qube Smart Bulb and Qube Smart Light Strip can mimic your lighting patterns while you’re away, making it appear as if you were home with the Qube Security feature.

Besides the obvious convenience and fun aspects of smart lighting, using smart lights in your home can actually lead you to have better sleep if used properly. For example, typical bulbs cast a blue hue, which can influence your brain to believe it is daytime. This interrupts your natural rhythm, making it difficult to fall asleep. By changing your lights at night to have a soft orange or yellow glow, you will fall asleep easier and stay asleep longer. If you or a family member suffers from insomnia, you might consider implementing smart lighting into your home. Whether it’s the Qube Smart Bulb, Qube Smart Light Strips, or another top brand, utilizing smart colored lighting is good for your health and well-being. 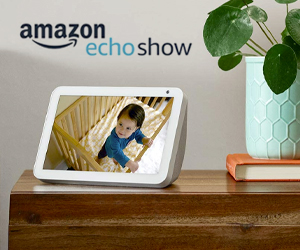 As mentioned before, the Qube Smart Bulb goes for $29, available now on the Qube Website for $24 as part of their pre-launch special. The Qube Smart Light Strip is offered for $24 for the starter pack, $12 for a one meter extension. Currently the strips are available for pre-order on Indiegogo. They’ve got some pretty cool perks if you want to invest in Qube.