Today’s smart home related big question is inspired by, the old saying: “If you build a better mousetrap, the world will beat a path to your door.” So, I ask, will the world beat a door to Dome, a Z-Wave centric home automation company exhibiting at CEDIA?

That’s right, Dome unveiled the first Smart Mousetrap! They named it Mouser. I could barely believe it, but you can see the product (front and back view) in the image below.

As usual, there was a Z-Wave booth, and it had a number of stations showing off different companies products. Some I’ve reported on before, such as Fibaro (who’s micro-controllers we’re installing later this month to interface with my oldest outdoor LED RGB strip lighting. Some other companies there were new to me, others like Aeotec (Aeon Labs) are familiar faces. 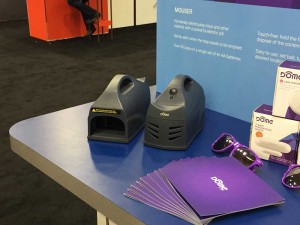 Mouser – the first smart mousetrap is about the size of a small hand held vacuum cleaner, complete with handle.

Dome really did it, along with a variety of other Z-wave devices. I’ll just mention some of those quickly: They offer a very slim door sensor (the pro version) where part is small enough to fit in the jam, if I have the term correct. And they offer a regular, larger one. They have a siren, a water leak sensor, a motion sensor and a small single external outlet. Also of interest to me a smart water main shut-off valve that can be tied to leak sensors Then of course, there is their Mouser, the world’s first Smart mouse trap. 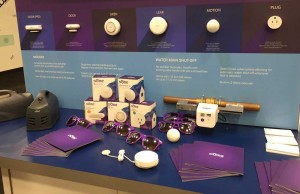 The short version is, you set Mouser up, it lures a mouse in, then stuns it unconscious and then per Dome, “humanely” electrocutes it. And of course Mouser lets you know it has done its job, time to remove the rodent before it starts smelling bad. Thanks to the handle you never have to touch the mouse, just tilt it, to empty, and start over. It will do 50 zaps on 4 AA batteries. (Who thinks this stuff up?)

You are probably thinking – does the world really need a better, Smarter mousetrap? After thinking about it for a couple of minutes I realized the answer was yes. If you have ever had to deal with a rodent problem, and have used poisons or traps, one of the major problems is if you aren’t vigilant, you might catch/kill one, and never be aware until the stink starts spreading through your house or apartment. You might have put traps in closets, and forget to check one of them. Or, with poisons, the rodent won’t die immediately so might wander somewhere away from where you put the poison and not find the mouse right away.

Who knows, perhaps the world will beat a path to Dome’s door.

At the very least, they deserve kudos for even thinking this up.

OK, all considered, many will think Mouser’s a pretty gruesome thing.  Of course, I probably should have only mentioned this product briefly as one of many products. I just couldn’t resist, though, thanks to the “better mousetrap” schtick!

In today’s world, where words often have more than one meaning, sometimes almost opposite of each other, perhaps the best way I can sum this up, by saying, that a smart mousetrap is pretty sick. I’ll let you sort out the meaning. -art

Art's been reviewing high tech products and editing their reviews for 15 years. He launched his first website presenting solutions.com (sold in 2003) in early 1995 when there were only a few thousand .coms. He launched ProjectorReviews.com in 2000, and started planning Smarterhomeautomation.com back in 2011. Art's goal is to provide in-depth reviews on the latest and hottest products that fit into the Smart Home, aka Home Automation, as well as insightful articles to educate people into what's available, what makes the most sense, and where the market is going, so people can better plan, and implement their goals for energy efficient, convenient, and downright "cool" capabilities. Ancient history: Born in Allentown PA, Graduated 1972. Sold and managed stereo stores (and did a little surfing) in the early, mid-70's before getting into computers and more AV. Managed the first computers store in Pa, starting in 1979 (not the first manager). Moved to selling computers to major accounts. Then moved west to SF area, for a four year stint with Epson starting in 1982, then left for one of the early large venture backed start-ups in the Silicon Valley - Presentation Technologies. Left there to start up Presenting Solutions, which became the first projector focused reseller on the internet (Jan 1995). Married Lori in 1990, and have been enjoying our daughter Lisa, since 1992! Presently living, and working in San Clemente, CA.