Done cooking and cleaning. Down lights switched from white to pleasing blue-green

This review looks at the Lightify Flex RGBW – Strip lights which use RGBW LEDs to offer the full spectrum of color, plus tunable white.  They are brought to you by Osram Sylvania.  A basic Flex RGBW kit sells online for under $70, and if you need it, Lightify’s gateway (hub) (using Zigbee technology) typically sells for $29. 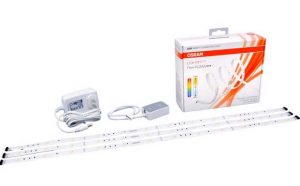 Our review of Lightify’s Flex RGBW lighting is our second look at Lightify products. I’m now referring to this Lightify product as Osram Sylvania Lightify or just Sylvania, as I’m hearing that the company will focus, in the US, on using the Sylvania name, and the Osram name in the EU where it is better known.
I never liked websites that make you read an entire review to find out what the reviewer thinks about the product, and whether it’s considered an award winner.  So, with that said, I’m pleased to let you know that the Lightify Flex Strips have earned our second highest award:  Awesome!

Part 2: How Smart is Smart Enough For Your Home?

Cemtrex Smart Desk – Take Your Productivity to the Next Level

While RGB and RGBW strip lighting has been around a while, and varies a lot in capability and cost, many are limited in smarts.  Most come only with a pocket or credit card type remote with limited color selection, and a few special effects.  Not so the Lightify Flex strips.  First of all, there are two direct ways to control them, and in addition they can be further controlled by some hubs, and by personal assistants such as Alexa or Siri.

One of the first decisions you will have to make is how to control your Lightify Flex Strips.  The first kit I received came from the folks at Belkin, makers of WeMo smart products.  Going with this solution let’s you control the Flex Strips with the same WeMo hub (called Link) that controls other WeMo devices. Originally, Belkin was selling the Lightify Flex strips, but they seem happy now, to simply let folks using their Controller, to buy the Lightify Flex strips from other sources, the lights still work with the WeMo controller, of course.  I already had several working WeMo switches and devices in our Dream Home / Smart Home (such as an external outlet and motion sensor combination, wall switch, etc. (check out those reviews).

I started with the WeMo hub and app, and used it exclusively to control the Lightify Flex Strips for the first couple of months when I had installed the lights as counter lighting  under our kitchen cabinets.

Whether the original packaging is Osram, or Sylvania, it will still work with the WeMo controller, and, of course, Lightify’s own Gateway.  In addition, a number of hubs, (including Wink, and SmartThings, and I believe the Almond 3 – but not confirmed), can control these lights directly without a separate hub/controller (like WeMo’s or Lightify’s Gateway).  When I started with Lightify here, I used that same WeMo hub that I already had controlling four other WeMo products (such as an external outlet and motion sensor combination, wall switch, etc. (check out those reviews).

A lot of the photos of the Kitchen are showing you the fancy color capabilities, but, of course, when cooking in the kitchen, primarily you want the down lights to be a nice, bright white.  Here’s what our kitchen typically looks like around dinner time:

About three months ago, I added additional Lightify Flex RGBW strips – this time provided by the Osram Sylvania folks – and installed them above the cabinets, and inside the two sets of glass doored cabinets (also in the kitchen).  Not long after completing that addition I switched over to using Osram / Sylvania’s own Lightify hub, which is called Gateway.  I already had running their GardenSpot RGB outdoor lighting that’s along our entry way, and a second run, on our side yard, washing the side of the house with color.  I reviewed the GardenSpot Mini RGB many months ago.

If you are new to home automation – have no other gear, other than Wi-fi in your home, and a smartphone – you can simply purchase a Lightify Flex RGBW kit plus their Gateway, and you have what you need.

OK, after that introduction, time to get serious – the next page starts with an outline of what will be covered, and then gets into “the basics.”